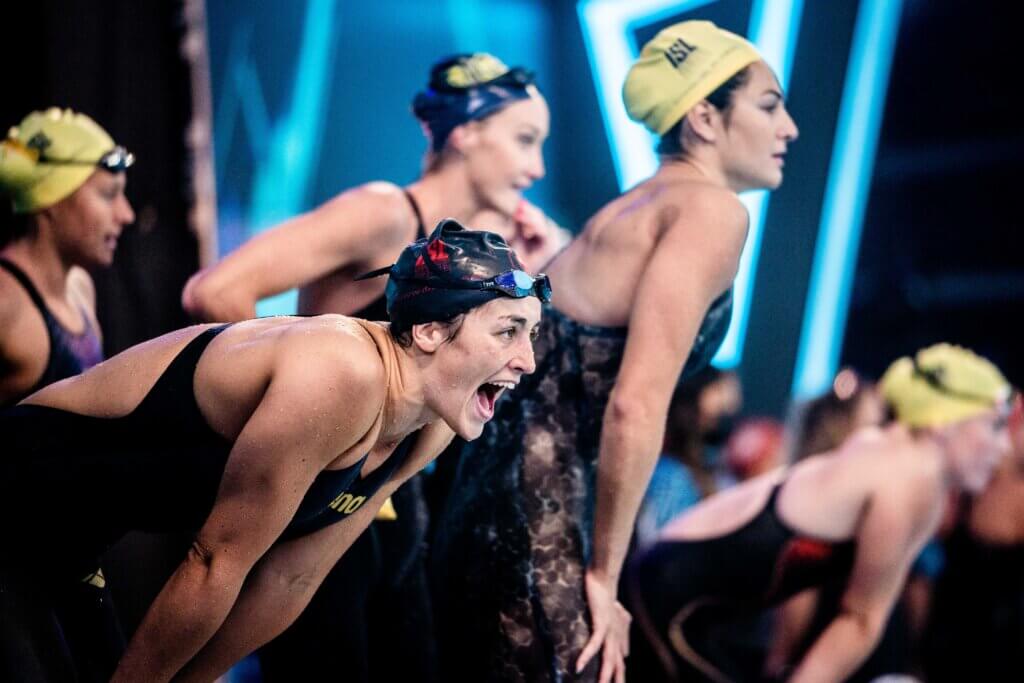 On September 9th and 10th in Naples, the fifth match of the 3rd regular season of the ISL was held. The participating teams were Canadian Toronto Titans (TOR) , American – LA Current (LAC) and DC Trident (DCT) as well as Hungarian Iron (IRO).

When the Titans took a solid lead after the first 1/3 of the first day and Iron were hopelessly behind, the main battle for the 2nd and the 3rd places was between the American teams.

Toronto Titans proved that their performance in the first match, where they de facto accidentally missed out on a win over Energy, was by no means a one-time blip. From the very first races, they demonstrated that their ambition this season extends to at least reaching the League’s Finals. At the same time, the Tridents have shown good potential and a willingness to part with their unpleasant underdog status. As for Iron, their potential was dormant for the majority of the game, “waking up” only on day 2, when their final last place was already a foregone conclusion.

On the first day, The Hungarian team won only one distance – Erik PERSSON arrived 1st in the men’s 200m breaststroke (no jackpot).

In the opening swims of the match, Titans and Current each took a jackpot of 15 points in the women’s and men’s 100 meter butterfly – Louise HANSSON and Tom SHIELDS, respectively.

In the women’s 4x100m freestyle relay Titans took a jackpot of 38 points (remember that in the relay race the teams get double points compared to the individual races), they came in first and held onto their winning place till the very end of the match:

Later the Titans also won in the men’s 4x100m relay, this time with a 30-point jackpot.

In addition, the representatives from TOR took the 1st places in the women’s 50m freestyle – Kasia WASICK and the men’s 50m backstroke – Shane RYAN (both with minimum jackpot).

The intrigue of the first day was an uncompromising rivalry for the 2nd place between two American teams – Californian Current, who was initially seen as the favourite, and Washington Tridents, who were seen as the underdog.

DCT had a win by Ryan HOFFER in the men’s 50m freestyle without a jackpot. They also had wins with a minimum 10 point jackpot: Andreas VAZAIOS and Bailey ANDISON in the men’s and women’s 200m individual medley, respectively; Felipe FRANCA SILVA in the men’s 50m breaststroke as well as Ali DELOOF in the women’s 50m backstroke.

The LAC was only able to respond with wins by Imogen CLARK in the men’s 50m breaststroke (with a minimum jackpot) and Martin MALYUTIN in the men’s 400m freestyle (11 points – 2 points for the 5th place in the first 100m + no jackpot). In the latter distance, Current’s Fernando SCHEFFER took 10 points for the 1st place at the 100m mark plus a final 5th place.

As a result, Tridents were slightly ahead of the Current.

By the end of the day Titans quite confidently won both men’s and women’s mixed 4x100m relays. They didn’t only get double points but also secured themselves an advantage by determining the style of the skin races (remember: teams that took 2nd and 3rd places in the mixed relays “block” one style of swimming for the skin races each. Then, the winner chooses from these 2 remaining styles – for women’s and men’s skins, respectively).

Positions of the teams after the first day of match 5:

As the ranking table shows, both American teams had a chance to catch up with the Canadians. A sharp fight for the 2nd and the 3rd place was also expected. However, on the second day very little intrigue was present.

On September 10th, the main protagonists were the LA Current and, unexpectedly! – the Iron. However, due to the fact that there were no big jackpots, LAC only managed to win the second place, while IRO stayed in the last place, getting, probably, only moral satisfaction.

The Tridents could not follow up on the first day’s success. DCT took the 1st and the 2nd places in women’s 100m breaststroke: the first place went to Tatiana BELONOGOFF (no jackpot), the second to Maria TEMNIKOVA. Also, Aleksandr SHCHEGOLEV won the men’s 200m freestyle (no jackpot), Balley ANDISON won the women’s 400m individual medley (16 points – 4 points for the 2nd place at the 200m mark and a small jackpot).

Titans achievements’ (before the skins) were modest: first places for TOR were taken by Fabian SCHWINGENSHLOGL in the men’s 100m breaststroke (no jackpot) and Alberto RAZZETTI (13 points – 4 points for the 2nd place on the 200m mark, no jackpot).

As for the LAC, they came out on top after the first race of day 2 – Madison WILSON’s victory in the women’s 100m freestyle (with a minimum jackpot), and then slowly but surely built up their lead over the DCT. Later, Madison WILSON also won the 200m freestyle (no jackpot).

In between those two WILSON victories, LAC also took the first places in the men’s 100m freestyle by Maxime ROONEY (no jackpot) and the men’s 200m butterfly by Tom SHIELDS (jackpot of 12 points).

The most striking victories of the LA Current were: Ingrid WILM in women’s 100m breaststroke with a jackpot of 19 points, as well as a “double” in the women’s 100m medley- Anastasia GORBENKO (with a minimum jackpot) and Beryl GASTALDELLO.

The burst of team Iron on the second day was, indeed, worthy of a better application. The most striking success was the 1st and 2nd places in the women’s 50m butterfly, where Ranomi KROMOWIDJOJO arrived first (jackpot of 12 points) and Emily BECKMANN second.

With a jackpot of 12 points Marco ORSI and Nicholas SANTOS won the men’s 100m individual medley and 50m butterly, respectively.

Also at their own distances, but without a jackpot: Alys THOMAS (women’s 200m butterfly) and Robert GLINTA (men’s 100m backstroke) got the wins for the IRO.

Before the skin races, the positions of the clubs were as follows:

The chances of the Current to catch up with the Titans and Trident to Current in this case were theoretical.

And, indeed, there was no sensation.

For the women’s 50m butterfly skins: in the quarterfinals, the semifinals and the finals Louise HANSSON of the Titans and Ranomy KROMOWIDJOJO of the Iron took the 1st and the 2nd places, respectively. The LAC and one more IRO entered the second round with them.

Both Iron and Titans made it to the semifinals of the men’s freestyle skins with two representatives from each team. The skins final was unique. Thom de BOER of IRO was opposed by Shane RYAN and Yuri KISIL of TOR: the point is that in the semifinals both Titans’ representatives shared the 2nd place with the same result and, according to the rules, both got to the final.According to the results of the match, the Titans may be classified as the tournament favourites, while the Current are more likely to be a solid middleground team. The Tridents still have a chance to avoid the “match of death” between the teams that finished 7th-10th in the regular season to get to the playoffs, while the Iron doesn’t seem to have that chance anymore. 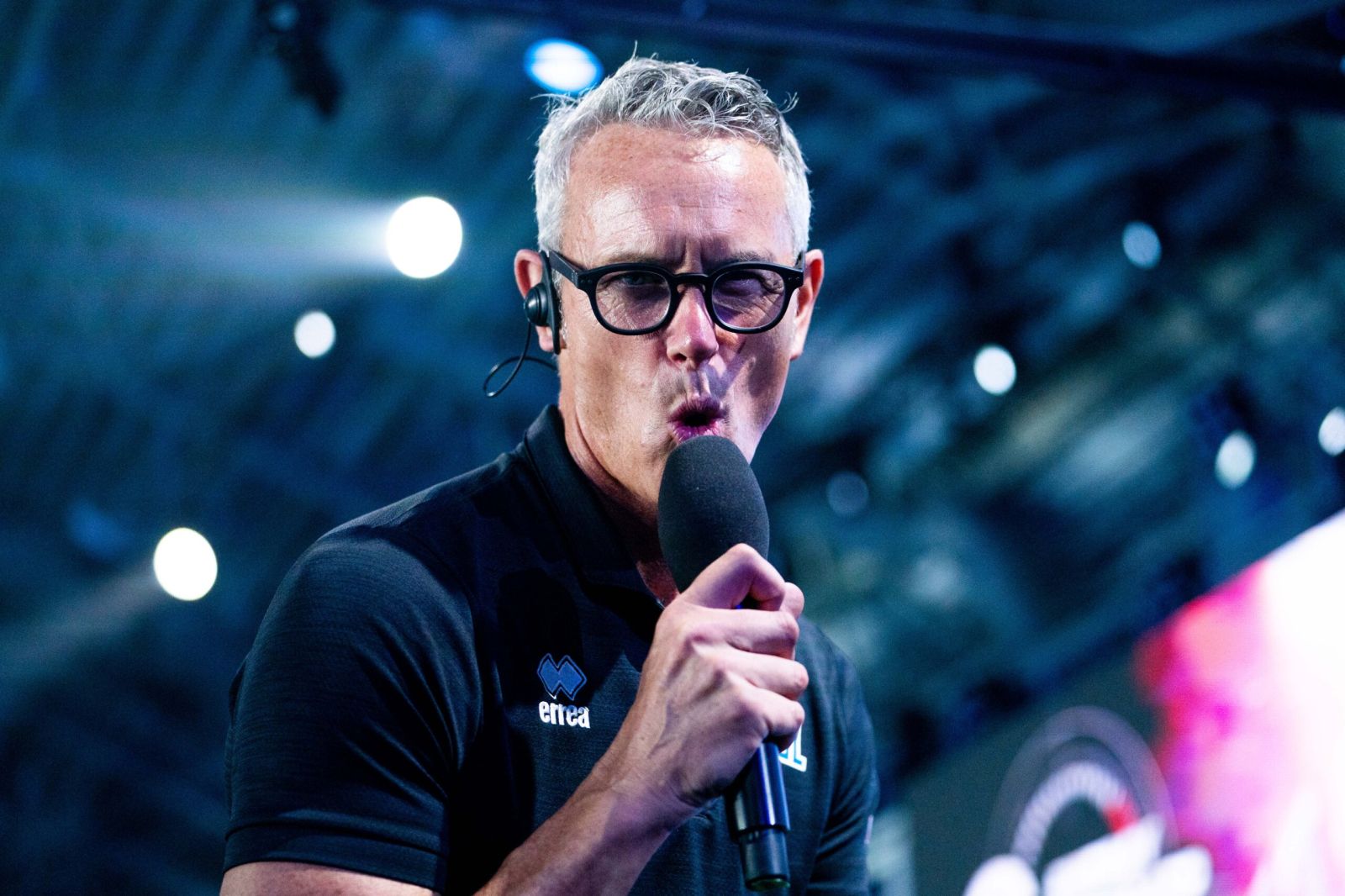 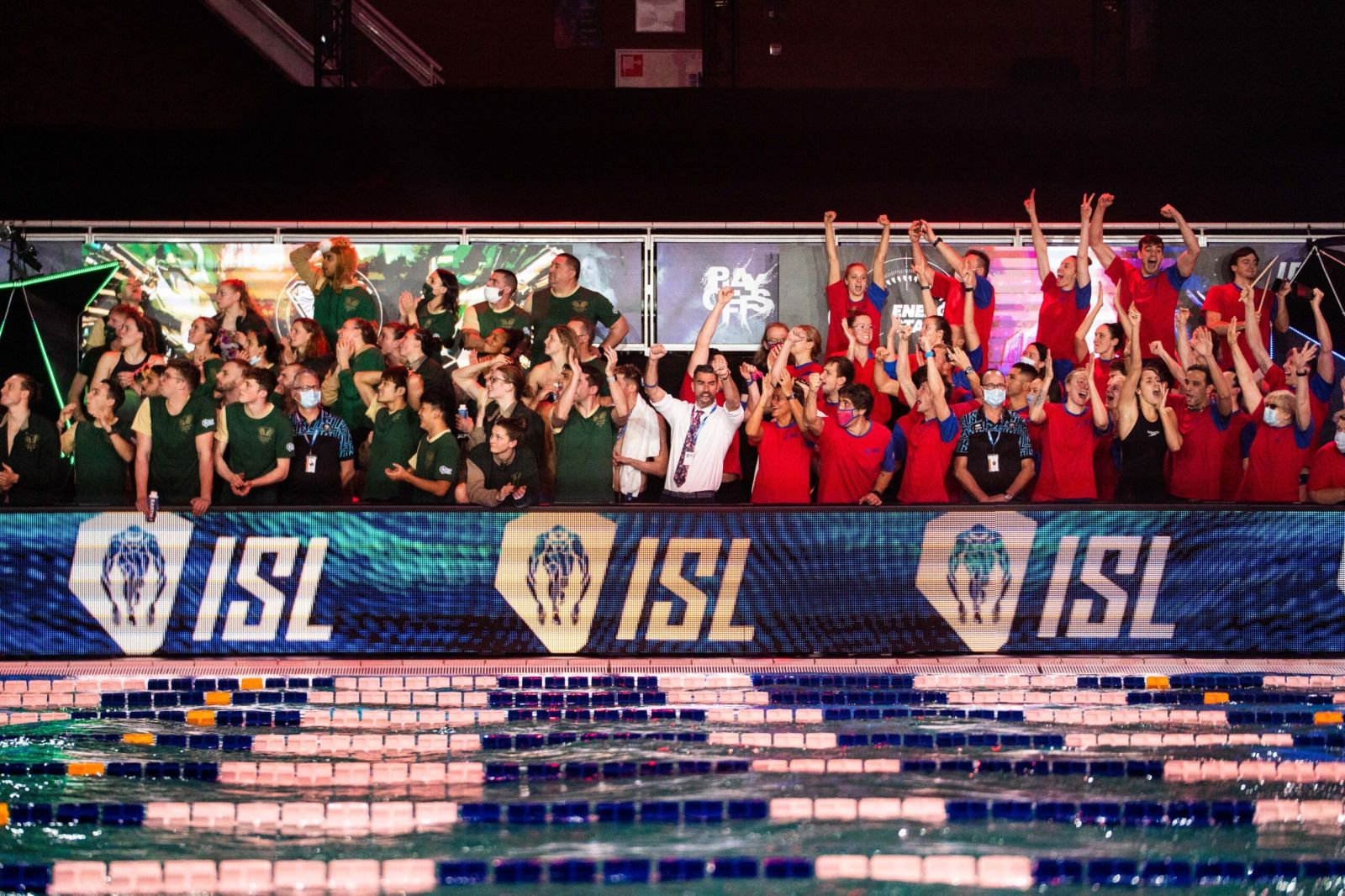 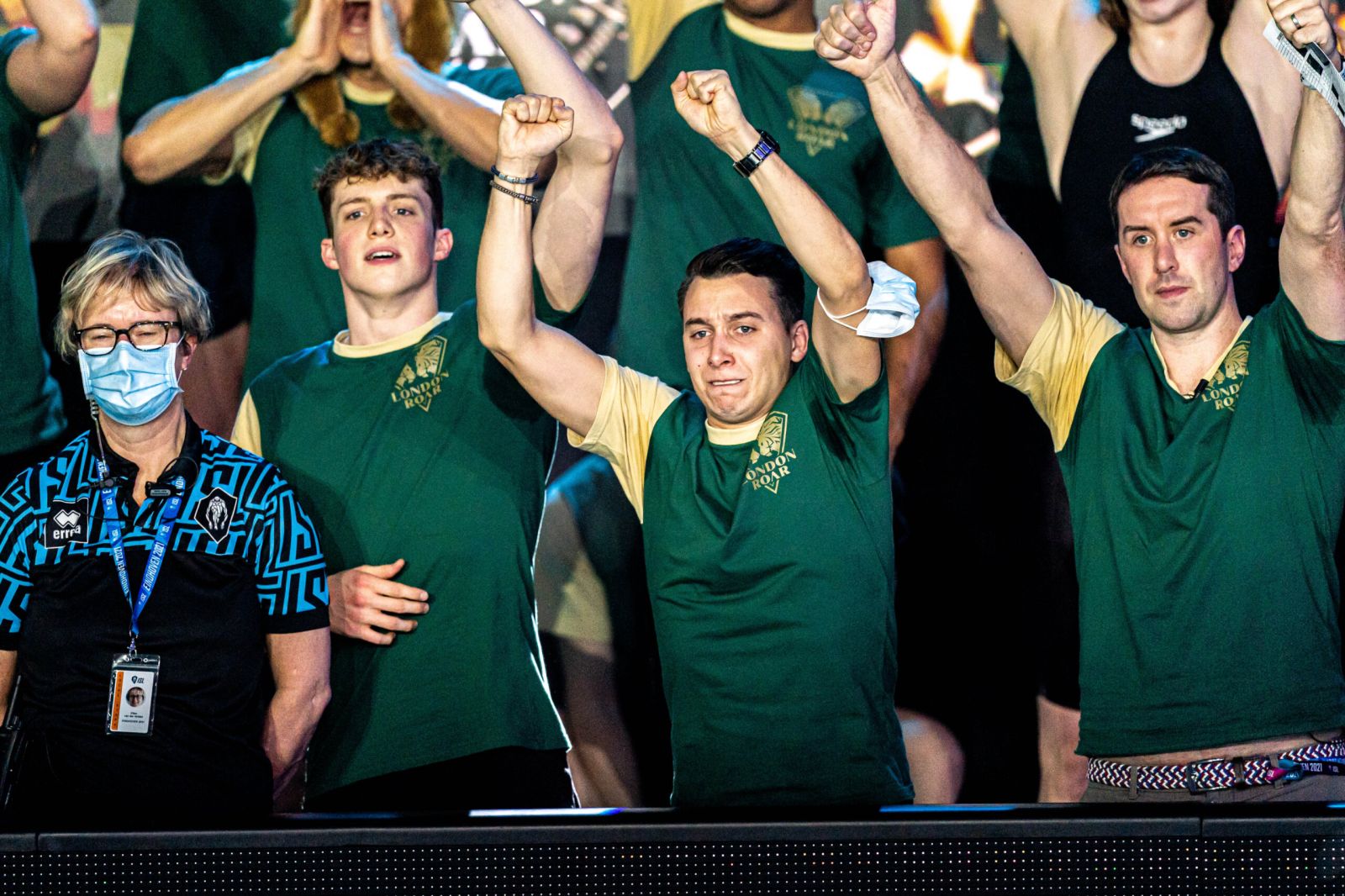 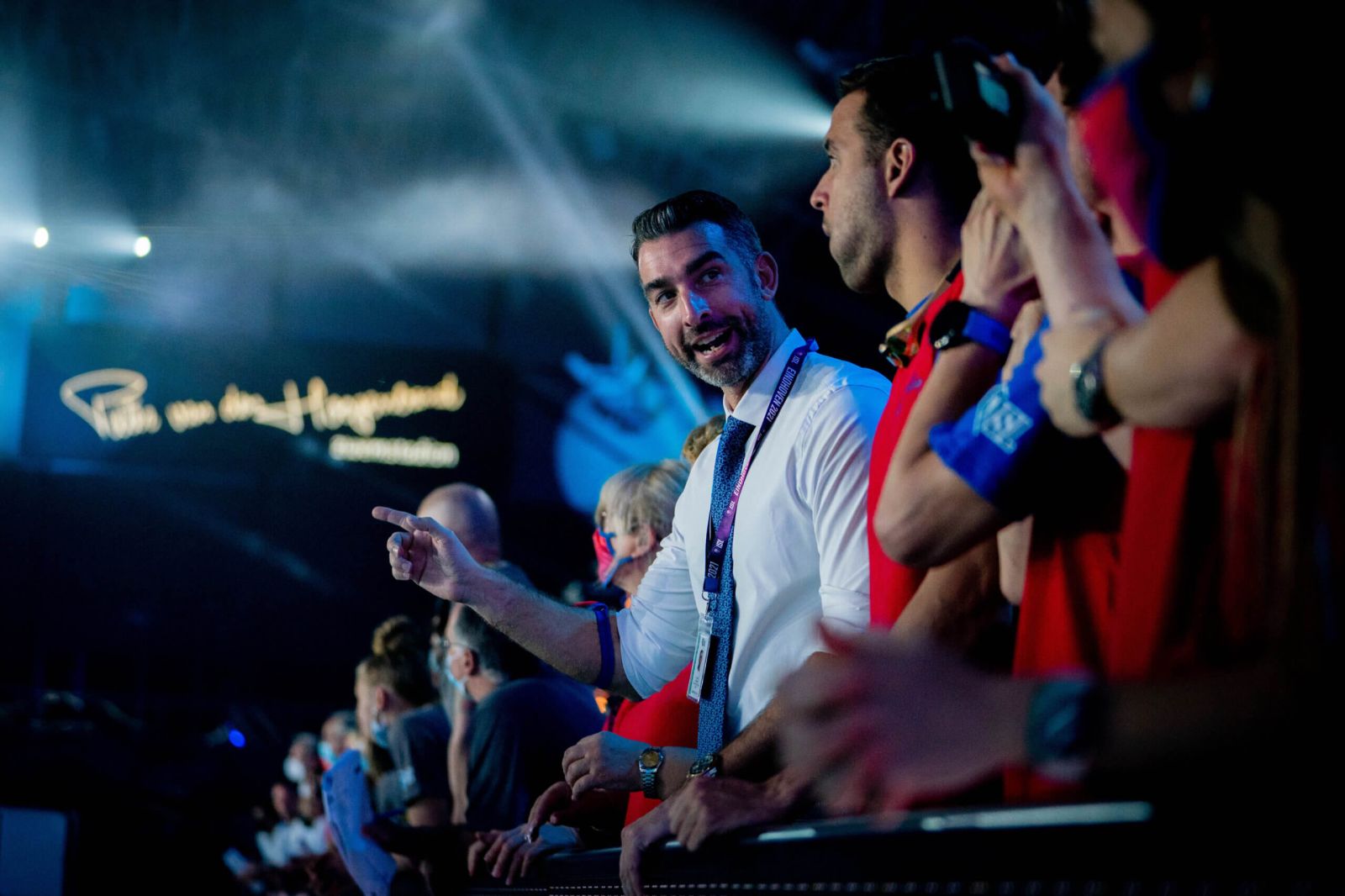