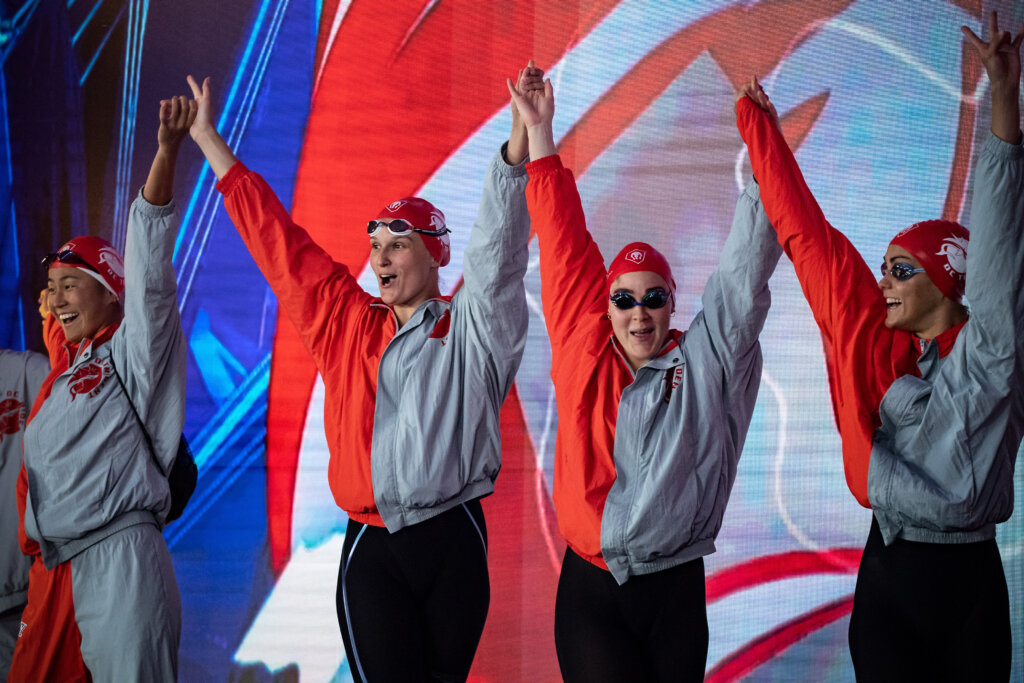 After 10 exciting Matches of the Regular Season of the ISL, 6 teams (ENS, CAC, LON, TOR, LAC and AQC) have secured their spots in the playoffs; while Iron, Tokyo Frog Kings, DC Trident and New York Breakers will fight in Match 11 to see which 2 teams will go to Eindhoven (just the top 2 teams will qualify for the playoffs).

Today’s match is going to be full of spectacular events and amazing performances, so let’s see what’s coming:

Iron’s butterfly crew is probably the strongest out of the four teams participating in this match. Nicholas Santos is the WR holder in the 50m butterfly, although he can swim a solid 100m. Iron’s 200m flyer, Luiz Altamir Melo complements Santos, and their swimmers Mikhail Vekovishchev and Thom de Boer can also swim decently in the butterfly events. In the women’s butterfly, Alys Thomas, Maria Ugolkova, Ranomi Kromowidjojo, and Emilie Beckmann cover all the distances for Iron, and Kromowidjojo has a good chance of winning the skins, if butterfly is selected.

The Tokyo Frog Kings have a tiny but quite a formidable butterfly crew. Aly Tetzloff, Harriet Jones and Leah Gingrich on the women’s side, accompanied by Takeshi Kawamoto with Daiya Seto on the men’s side. In the 200m butterfly, Seto and Gingrich are both worthy candidates for the win.

As for the New York Breakers, Svetlana Chimrova and Matt Temple are the people to watch out for, while Arina Surkova, Jakub Majerski and Joe Litchfield will need to strive in order to win their team any points in the butterfly events.

Zach Harting is the DC Trident’s best chance at scoring high points in the fly events. They also have Ryan Hoffer, Camden Murphy and Andreas Vazaios on the men’s side, while on the women’s side Szuszanna Jakabos, Madeline Groves and Klaudia Nazieblo will be scoring for the Tridents .

Team Iron’s Robert Glinta and Ingeborg Loyning have drastically improved over this season and are capable of bringing huge points to their team. The club has other good backstrokers – Guilherme Basseto, Africa Zamorano, Lorenzo Mora, and Silvia Scalia – however, in order to score points, they will have to outperform themselves in the “death match”.

Tokyo Frog Kings have a superb backstroke trio that is very likely to bring the team some big wins: Grigory Tarasevich, Richard Bohus, and Takeshi Kawamoto. Although Frog’s female backstrokers are not as strong as the male, they still have a chance to score. Catie DeLoof, Gabby DeLoof, Cassie Wild, Aly Tetzloff and Paige Madden make up this squad.

In the sprint backstroke, Alicja Tchorz has been quite helpful for the New York Breakers this season. Daryna Zevina and Paulina Peda have performed admirably, while Oleg Braunscheig, Brandonn Almeida and Joe Litchfield have yet to put out a great performance this season.

Ali DeLoof and Linnea Mack of DC Trident are exceptional sprint backstrokers capable of scoring massive points. Jacob Pebley, Mark Nikolaev and Andreas Vazaios cover all three events quite effectively for the DC men, with Pebley having a solid chance to win the 200m distance.

Erik Persson, Emre Sakci, Bernhard Reitshammer, Ida Hulkko, and Jenna Strauch make up Iron’s tiny but mighty breaststroke squad. Big results can be expected from Sakci, who demonstrated impressive results in ISL Season 2, yet still has not performed to his full potential in Season 3.

The Frog Kings’ Daiya Seto, Yasuhiro Koseki and Alessandro Pinzuti make up a strong team, while Kanako Watanabe and Miranda Tucker must perform exceptionally in order to score points for Tokyo.

Molly Renshaw, Abbie Wood, Tes Schouten, Marco Koch and Philip Heintz make up the New York Breakers breaststroke squad. Renshaw had some outstanding swims this season and can score big points for her team, while Wood, who also performed very well, will be challenged by Tokyo’s Yui Ohashi.

Cody Miller, Felipe Franca Silva and Tommy Cope have all been swimming decently for the DC Trident and can be relied on by their team in this match. Maria Temnikova and Tatiana Belonogoff are both capable of scoring points and might even finish in the top three.

Team Iron has an extremely strong women freestyle roster: from the 50m distance all the way up to the 400m. Ranomi Kromowidjojo, Costanza Cocconcelli, Barbora Seemanova, Veronika Andusenko, Melanie Henique and Silvia Scalia can all show exceptional results and bring massive points to their team. On the men’s side, Iron’s athletes are quite strong in the sprint events. The list of their best performing swimmers consists of Thom de Boer, Marco Orsi, Matt Richards, Luiz Altamir Melo, Lorenzo Mora and Mikhail Vekovishchev.

The Tokyo Frog Kings have a well-rounded freestyle roster. Paige Madden, Aly Tetzloff, Gabby DeLoof, Julie Meynen, Chihiro Igarashi and Mallory Comerford are the women who have been showing promising results this year. If the men’s team is to score points, Nandor Nemeth, Pedro Spajari, Ivan Girev, Maarten Brzoskowski and, most importantly, Vladimir Morozov, are the ones to do it. However, these swimmers will have to step up their game in order to win over the strong athletes from the rival teams.

The New York Breakers’ Brendon Smith, Jakub Majerski, Jakub Kraska, Meiron Cheruti, Matt Temple and Stan Pijnenburg make up a powerful men’s freestyle team. They are expected to outcompete their competitors and win points for their team. The Breakers roster is also likely to be stronger than Tokyo’s which definitely gives them an advantage. The strongest female swimmers such as Daria Ustinova, Kornelia Fiedkiewicz, Marrit Steenbergen and Arina Surkova are probably going to increase the competitiveness of the Breakers in the relays, whereas wins in the individual events would be surprising.

Out of all DC’s female athletes, Leah Neale, a middle-distance swimmer, is the most likely to get a victory in any freestyle event, even though her best distance is the 400m. However, the Tridents have other middle-distance swimmers, who can potentially bring their team good points, such as Zane Grothe and Aleksandr Shchegolev. Zach Apple and Ryan Hoffer for men as well as Ting Wen Quah, Linnea Mack and Anna Hopkin for women, are the best sprinters of DC, from whom big wins can be expected.

Iron’s Leonardo Santos and Marco Orsi can potentially win the 100m and 200m IMs. In the women’s IM, Iron is a little weak, so Maria Ugolkova, Africa Zamorano and Constanza Cocconcelli will have to step up their game in order to score points in this match.

Daiya Seto and Yui Ohashi are the two most dominant swimmers from the Tokyo Frog Kings. Seto, just like Ohashi, is the favorite in both the 200m and 400m IM, while Leah Gingrich and Daniil Pasynkov are Tokyo’s IM support players.

Abbie Wood and Brendon Smith of the NYB are both capable of winning one or more IMs, though Wood is more likely to win the 200m & 400m. Joe Litchfield, Stan Pijnenburg and Marrit Steenbergen are the Breakers’ supporting IMers.

Bailey Andison, Andreas Vazaios and Jay Litherland help the DCT to stay strong in the IM’s, while Szuszanna Jakabos and Klaudia Nazieblo are their swimmers who provide support. In the “death match”, DC will have to rely on these top players in order to get to the 1st or the 2nd place overall and get to the semifinals.