Home | ISL | News | MATCH #11: DC Trident and Iron break through to the playoffs in Eindhoven 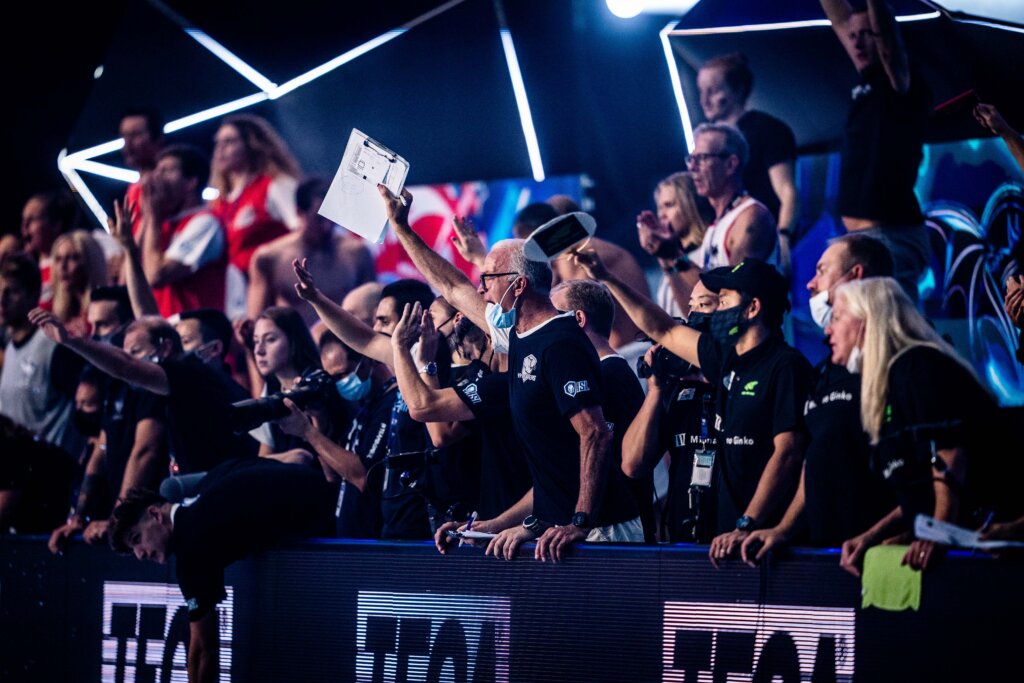 On September 29th and 30th the last match of the Third Regular Season of the ISL, also known as the “Death Match”, was held in Naples, Italy. The participating teams were the two American clubs DC Trident (DCT) and NY Breakers (NYB), Hungary’s Iron (IRO) and Japan’s Tokyo Frog Kings (TOK), who, in the team standings, were ranked between the 7th and the 10th places. Being a “Death Match” for some and a “Revival Match” for the others, match 11 was the last chance for the lagging teams to proceed to the play-offs held in Eindhoven (The Netherlands) this November.

The table doesn’t quite reflect the nature of the rivalry in the game: the Tridents became unreachable long before the end of the match, while the Ironmen were only able to cut the gap to a minimum during the skin races. In addition, the Frog Kings were Iron’s main pursuer for a long time and the Breakers only left the last place after the skins.

Furthermore, after the first swims, the Breakers even were in the lead for a short while. Although the Frogs’ Aly TETZLOFF came in first in the women’s 100m butterfly with a minimum jackpot (10 points), her teammate did not only finish last, but also was not able to meet the cut-off time, receiving a 1-point penalty. The Breakers, on the other hand, took 13 points in the race, thanks to the 2nd and 3rd places of Svetlana CHIMROVA and Alicja TCHORZ. On the same distance for men, Jakub MAJERSKY from NYB took the win with a minimum jackpot, while his teammate added 3 more points for the 6th place.

In the women’s 200m backstroke, Tokyo’s Gabby DELOOF and Paige MADDEN took the 1st (no jackpot) and the 3rd place, respectively. Then, in the same distance for men, Trident’s Jacob PEBLEY won with a jackpot of 12 points and, although his teammate did not take any points, the Tridents were the team winners of the race.

Then, the New York club had a “double” in the women’s 200m breaststroke by Abbie WOOD (1st place, minimum jackpot) and Molly RENSHAW (2nd). In the same distance for men, Iron’s Eric PERSSON was the 1st and took a jackpot of 12 points.

The first turning point of the match happened in the women’s 4x100m freestyle relay, where the first Trident’s relay team took the 1st place with a jackpot of 24 points (remember, the points are doubled in relays) and DC’s second team added 6 points for the 6th place. Moreover, both Iron’s and Breakers’ second relay teams fell under the jackpot and had a 2-point penalty each for failing to meet the cut-off time.

After that, the clubs were placed in the following order:

In the next phase of the match, NYB started giving up their position, as their opponents began to take over.

The Tridents had the win in the men’s 50m freestyle by Rian HOFFER (minimum jackpot), to which his teammate added 3 points for the 6th place. Then, in the 200m individual medley Andreas VAZAIOS finished 1st with a minimum jackpot, while another DC swimmer added 2 points for the 7th place.

The Tokyo club’s olympic champion Yui OHASHI took the win in the women’s 200m individual medley with a jackpot of 12 points. The Frogs had an even more convincing victory in the men’s 50m breaststroke, where Yasuhiro KOSEKI earned 12 points for the 1st place and Alessandro PINZUTI added 6.5 points for sharing the 2nd-3rd place with Kirill STRELNIKOV from IRO.

In the men’s 4x100m freestyle relay, the Breaker’s relay team finished 1st, however, overall, the Tridents and the Breakers both took 24 club points each; the Frogs received a total of 18 points, while team Iron only took 8.

The position of the clubs at this point was as follows:

At this point, the situation looked quite unpredictable, however, by the end of the 1st day, without doing anything too significant, Iron easily overtook the Frogs and the Tridents, ending up far ahead on the 2nd place.

In the women’s 50m backstroke, the three DELOOF sisters, Ali, Gabbi and Catie met. The latter two took the 7th and the 8th place, bringing their team TOK – 3 points; while Trident’s Ali shared the 1-2 places with Iron’s Melanie HENIQUE and brought her team 8 points. The Ironmen took 12 points in this race, while the American teams took 11 points each.

The same distance for men was taken by Mark NIKOLAEV of the Tridents without a jackpot, to which Andreas VAZAIOS added 5 points for the 4th place.

Joanna EVANS (DCT) beat Barbora SEEMANOVA (IRO) and Abbie WOOD (NYB) in the women’s 400m freestyle, with the Tridents taking 20 points, Iron – 16, the Frogs – 12 and the Breakers – 5. Paige MADDEN (TOK) took only 3 points at the finish, but added 6 points for the 1st place at the 100m mark. Daria USTINOVA (NYB) was 2nd at the 100m mark, but at the finish line she did not only fall under the jackpot, but also failed to meet the cut-off time, having to give away a penalty point.

On the same distance, in the men’s event, Brendon SMITH of the Breakers won with 14 points (minimum jackpot + 4 points for the 2nd place at the first 100m). His teammate Luiz Altamir MELO added another 5 points for the 4th place. The second swimmer with the most points was Velimir STJEPANOVICH from the DCT, who finished 5th in the race but took the 1st place at the 100m, earning a total of 10 points for his team.

After the first day, the position of the clubs was as follows:

The Tridents could be relatively comfortable with a 62.5-point lead over the 3rd place, but they had to expect a much closer fight for the 2nd place. However, in a situation where victories were achieved either with a minimum jackpot or no jackpot at all, getting close to the leader or even the 2nd place was not an easy task.

Moreover, the win of one swimmer did not guarantee the victory of their team:

Only the “doubles” or the 1st and 3rd place finishes could help the teams get an advantage  over their opponents:

The position of the teams after the first 10 swims of the second day was as follows:

One could assume that the fight for the 2nd place was still ahead, but as the last part of the match began, Iron finally made a breakthrough, leaving the Frogs far behind and guaranteeing themselves a place in the play-offs even before the skin races.

At first, the amazing Ranomi KROMOWIDJOJO won in the women’s 50m butterfly with a jackpot of 12 points. Melanie HENIQUE added 7 points for the 2nd place; while the Frogs only took 4 points.

Then, on the same distance for men, Nicholas SANTOS spectacularly won with a jackpot of 24 points finishing ahead of Takeshi KAWAMOTO who took the 2nd place and 7 points.

In the 200m freestyle, Barbora SEEMANOVA won without a jackpot; team Iron took 11 points against 6 that went to the Frogs. The same event for men was taken by Aleksandr SHCHEGOLEV from the DC with a minimum jackpot; Iron took 9 against Frog Kings’ 5 points.

The Hungarian club also won the 4x100m mixed medley relay taking the 1st (no jackpot) and 3rd places and scoring 30 points overall. Tokyo only received 10 points for the 5th and the 8th places.

The highlight of the day was the women’s 400m individual medley where the Breakers’ Abbey WOOD met the Trident’s Bailey ANDISON: the latter fished 0.65 seconds ahead and brought her team 18 points (12 jackpot points + 6 points for the 2nd place at the 200m). WOOD brought the Breakers 8 points (7 for the 2nd place + 1 point for the 6th at the 200m mark). Olympic champion Yui OHASHI from the Tokyo club  was only third, but still earned 9 points (6 for the 3rd place + 3 for the 4th place at the intermediate finish). In this swim, Paige MADDEN of the Frog Kings was leading after the first 200 meters, but fell under the jackpot at the finish line, resulting in points at the 200m mark moving down (6 points for the 2nd place instead of the 1st, 4 for the 3rd place, etc. 1 point for the 6th place).

On the same distance for men, Brendon SMITH of the Breakers was first, defeating Daiya SETO of the Frogs and Andreas VAZAIOS of the Tridents. Interestingly, they finished the first 200m in the same order, so, overall, SMITH brought his team 16 points. Meanwhile, the Breakers took 22 points in total and the Frogs, who got only 11 points, ended up at arm’s length.

Before the skin races, the teams’ position was as follows:

The skin races could only solve the question of the 3rd-4th place, and despite the fatigue and a lost chance to participate in the play-offs, both the Frog Kings and the Breakers fought until the end.

In the women’s 50m breaststroke skins, two Iron’s swimmers and one from each Tokyo and New York reached the semi-finals. In all three swims, the audience witnessed a fierce fight between Ida HULKKO from Iron and Miranda TUCKER from the Frog Kings. In the quarterfinals HULKKO was first, in the semifinals and finals – TUCKER. As a result, in the women’s skin race, Iron ended up 31.5 points behind the leader, while the Frogs were 18.5 points ahead of the Breakers.

In the men’s skin race, TOK didn’t make it to the semifinals, while the two NYB swimmers got in. As a result, even though Iron’s Thom de BOER beat the Breakers’ Matt TEMPLE in the final (and IRO was 15 points closer to the DCT), the NY club scored a total of 33 points against Tokyo’s 3, and as a result, came in the 3rd place.

Thus, the final results of the Third Regular Season are:

The above teams have advanced to the play-off stage, which will be held in November in Eindhoven