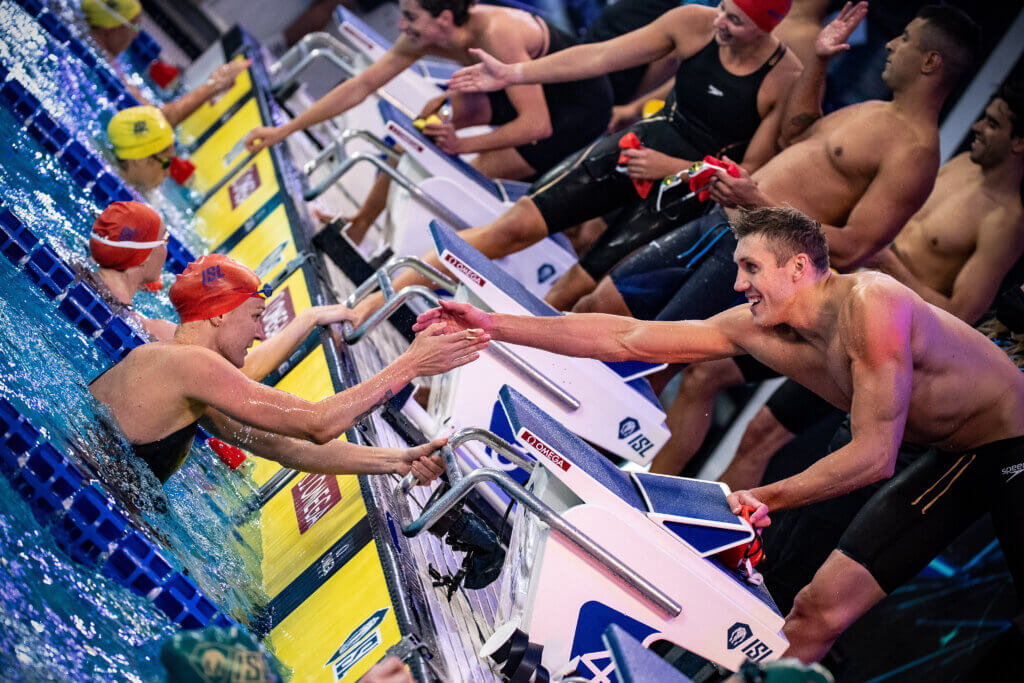 In another match of the Third Regular Season of the International Swimming League (ISL) the two favorites – Parisian Energy Standard (ENS) and London Roar (LON) competed with the fighting for survival club Tokyo Frog Kings (TOK) and the American club LA Current (LAC), that already solved the problem of qualifying for the play-off.

The undoubted revelation of the third season was Ingrid WILM from the Current. Despite the fact that her club was fighting for only the 3rd place in this match, she showed brilliant results. WILM  won the women’s 200m breaststroke (with a jackpot of 12 points); 50m breaststroke with the same result as Kira TOUSSAINT (without a jackpot, 8 points each) and she finished 1st in the first round of the medley relay. On day 2 Ingrid WILM continued her dominance in backstroke swimming against formidable competitors such as Kira TOUSSAINT, Minna ATHERTON and Anastasiya SHKURDAY. Ingrid won the 100m backstroke (with a jackpot of 15 points) as well as the women’s skin race, finishing 2nd in the quarterfinal (7 points) and winning the semi-final (9 points) and the final (jackpot of 21 points).

From men, as expected, the Current’s leader was Tom SHIELDS who dominated the men’s 100m butterfly (jack-pot of 12 points, almost 0.7 seconds ahead of Chad Le CLOS). In the skin races, SHIELDS split the 2nd and the 3rd places in the quarterfinals (6.5 points), but was first in the semifinal (9 points) and the final (14 points).

The LAC was also supported by Abbey WEITZEL, who was 0.03 seconds ahead of the formidable Sarah SJOSTROM in the 50m freestyle (jackpot of 12 points), as well as Anastasia GORBENKO who was victorious in the 100m individual medley (minimum jackpot).

We can also note the results of LAC’s Martin MALYUTIN and Breno CORREA who got the 2nd (9 points) and 3rd (6 points) places in the men’s 400m freestyle, respectively (at the 100m mark MALYUTIN was 4th, while CORREA was only 8th).

It is interesting that on the first day of the match the team representatives from Tokyo did not take any first places, but were quite close to the Current.

Keanna MACINNES from the Frogs won the women’s 200m butterfly (with a minimum jackpot of 10 points), while Leah GINGRICH brought their team another 6 points for the 3rd place in the same event.

And there is the Olympic champion Yui OHASHI.

And yet, despite the individual bright successes of the Current and the Frogs, the main content of the match was the rivalry between the Energy and the Lions. In the case of victory, the club from London continued to fight for the title of Champion of the Regular season. The ENS and LON rivalry was resolved only in the skin races, as most of the time Energy was ahead with a small lead and a couple of times the Lions moved to the 1st place shortly.

While there were only a few “slaughterers” in the Los Angeles and Tokyo, the Londoners and the Parisians had a lot more of them.

On the first day, two big victories were scored by the match MVP Ilya SHYMANOVICH of ENS in the men’s 200m breaststroke (jackpot of 12 points, beating Daiya SETO) and the 50m breaststroke (jackpot of 19 points). Felipe LIMA added 7 more points for the 2nd place in the latter race, while the Lions did not get any points. However, on the same course for women, Alia ATKINSON beat Benedetta PILATO from ENS by 0.04 seconds, getting a 19-point jackpot for the London club.

The Lions outnumbered the Energy in terms of distances won on the first day, but the latter scored more points overall. LON took the following wins: Emma McKEON – in the women’s 100m butterfly (jackpot of 12 points); Christian DIENER – in the men’s 200m backstroke (beating the Olympic champion Evgeny RYLOV, no jackpot); Kyle CHALMERS – in the men’s 50m freestyle (no jackpot); Duncan SCOTT – in men’s 200m IM (jackpot of 12 points) and 400m freestyle (13 points – no jackpot + 4 points for the 2nd place at the first 100m); Guilherme GUIDO – in the men’s 50m backstroke (jackpot of 15 points, jackpoted KOLESNIKOV and also beat RYLOV who only took the 3rd place in the swim).

In the 4×100 freestyle relay Lions and Energy exchanged blows: the women’s relay was brilliantly won by the ENS club (Siobhan HAUGHEY, Femke HEEMSKERK, Fanny TEIJONSALO and Sarah SJOSTROM) with a jackpot of 38 points (recall that points are doubled in relays). Then, in the men’s relay LON was first (Kyle CHALMERS, Dylan CARTER, Katsumi NAKAMURA and Edward MILDRED) with a jackpot of 30 points. However, the Lions’ second relay team received no points for the 7th place, and the Energy team took a total of 22 points for the 2nd and 5th places.

The women’s 4x100m medley relay, which determines the skin race style, was taken by the Lions (Kira TOUSSAINT, Alia ATKINSON, Emma McKEON and Marie WATTEL), ahead of the Current  (Ingrid WILM, Anastasia GORBENKO, Anna NTOUNTOUNAKI and Abbey WEITZEL) by an elusive 0,01 seconds. However, Roar’s second relay team came last and got no points, so in spite of the jackpot, they got only a slight advantage over their competitors in terms of team points – 24 points against 20 for the LAC and the ENS.

The men’s 4x100m medley relay was taken by Energy’s relay team (Evgeny RYLOV, Ilya SHYMANOVICH, Chad Le CLOS and Florent MANAUDOU), which took the win over the Lions (Guilherme GUIDO, Ross MURDOCH, Vini LANZA and Kyle CHALMERS) by mere 0.06 seconds. But in the absence of a jackpot, ENS and LON took an equal number of points – 22 each, while the right to choose the style of men’s skins was given to the Parisians.

The position of the clubs after the first day of the match:

Both Energy’s and Lions’ leaders continued to dominate their signature distances on the second day of the match, and once again the two teams swapped places in the ranking a couple of times.

Duncan SCOTT from the Roar won the 100m individual medley (10-point jackpot) and the 200m freestyle (minimum jackpot) as well as he took the 2nd place in the men’s 4x100m IM.

Alia ATKINSON was 1st in the 100m breaststroke (no jackpot) and her teammate Annie LAZOR added 6 points to the Roar for the 3rd place. Dylan CARTER was 0.07 seconds ahead of Ben PROUD in the men’s 50m butterfly.

Katie SHANAHAN won the women’s 4x100m individual medley, bringing 16 points to her team LON (a jackpot of 12 points + 4 points for the 2nd place at the mid-distance).

Once again, on the second day, the Energy had less wins than the Roar – only 4. In the second half of the match before the skin races, Ilya SHYMANOVICH won the men’s 100m breaststroke (jackpot of 19 points) while Felipe LIMA added 6 points for the 3rd place (LON did not get any points). Also, Sarah SJOSTROM won the 50m butterfly (with a minimum jackpot) and then, Siobhan HAUGHEY won the women’s 200m freestyle (with a minimum jackpot).

The most important victory for the Energy was the 4x100m mixed medley relay. The first ENS relay team (RYLOV, SHYMANOVICH, SHKURDAI, SJOSTROM) took the 1st place and a 38-point jackpot, while the second relay team brought 12 points to their club for the 3rd place. The two Lions’ relay teams together took only 24 points.

Before the skin races, the position of the clubs was as follows:

The Lions had a chance to catch up with the Energy, but it so happened that the main players in the women’s skins were the representatives from the Current and the Frogs, while the first were able to beat the latter in a dramatic struggle. Although a swimmer from ENS made it to the finals, where she was defeated by Ingrid WILM, LON girls took more points than ENS, thanks to a 15-point jackpot by Kira TOUSSAINT in the quarterfinals.

The Frogs had a chance to beat the Current if Takeshi KAWAMOTO, who won the men’s skins quarterfinals, had beaten Tom SHIELDS in both the semifinals and the finals, or at least the finals with a jackpot. However, both distances were taken by SHIELDS.

After eight matches of the Third Regular Season of the International Swimming League, the position of the clubs is as follows:

DIGITAL PLATFORM: Subscribe to the isl.global platform and anjoy the entire ISL Season 3.