Home | ISL | News | MATCH #7: The Condors without Caeleb DRESSEL struggle to beat the

MATCH #7: The Condors without Caeleb DRESSEL struggle to beat the 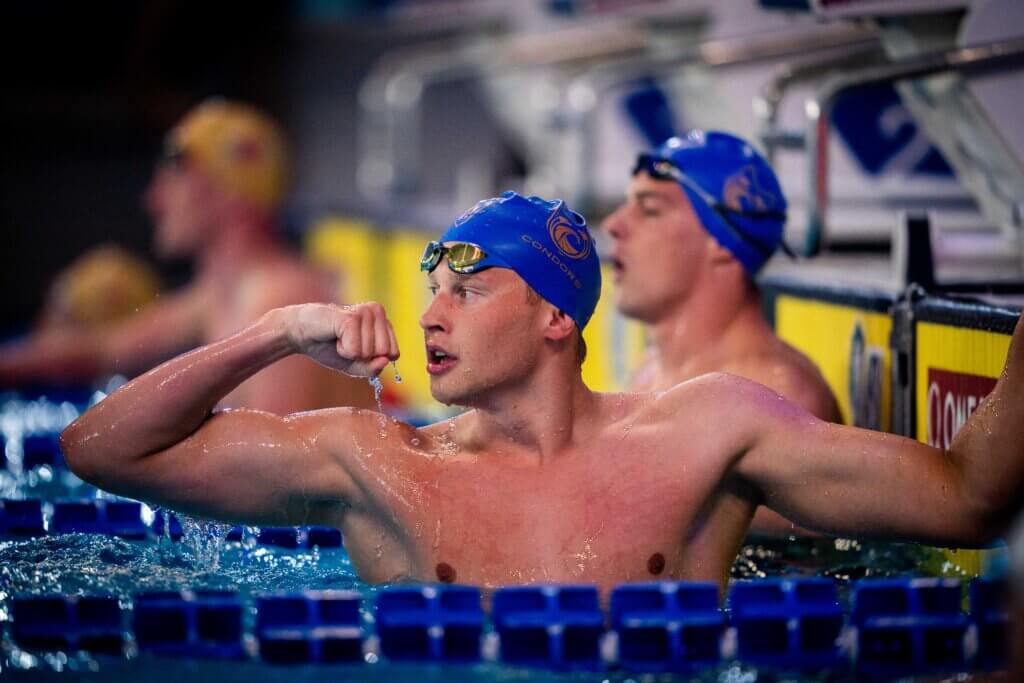 On September 16th and 17th in Naples, the American club Cali Condors and the Canadian Toronto Titans met in yet another game of the Third Regular Season of the ISL. Two other clubs competed against them at a risk of not making it to the playoffs: the Hungarian Iron and the American NY Breakers. The absence of 7-time Olympic champion Caeleb DRESSEL in the Condors’ lineup allowed the league’s other top clubs to battle the Californians on almost an equal ground.

However, the final result does not quite reflect the intensity of the match: the excess of almost 60 points against the Titans was gained by the Condors during the skin races, where the American team got quite lucky.

In general, during both competition days the Condors and the Titans were going in cycles with one team coming on top, then the other one taking the lead and so on until the skins. The first race of the day already anticipated a fierce fight: Louise HANSSON of TOR took the 1st place in the 100m butterfly with a jackpot of 12 points. However, Kelsi DAHLIA and Erica BROWN together got the Condors the same amount of points for the 2nd and 4th places (the second member of the Titans fell under the jackpot).

Then, thanks to Marius KUSCH’s victory (no jackpot) in the same distance for men, the Titans were slightly ahead. Cali answered with a jackpot of 19 points by Beata NELSON in the women’s 200m backstroke. NELSON’s success was slightly offset by Lisa BRATTON and Kylie MASSE, who took the 2nd and 3rd places in the same race.

Coleman STEWART won the same distance for men without the jackpot. His teammate was last and the Titans were able to take more points for the 2nd and 5th places – 11 points against 10 for the Condors.

Lilly KING made a jackpot of 15 points in the women’s 200m breaststroke. Then, for the first time, team Iron proved themselves: Eric PERSSON brought them their first individual victory in the same distance for men with a small jackpot of 10 points.

The women’s 4x100m freestyle relay was taken by the Titans with a jackpot of 30 points (remember – in relays, the points are doubled). The two relay teams of the Condors got 24 points in total, while the second TOR team got no points.

CAC’s Justin RESS won the 50m freestyle without a jackpot, beating Iron’s Thom de BOER by just 0.02 seconds and his teammate Jesse PUTS by 0.03 seconds. A “double” from the Titans on the same distance for women followed: Kasia WASICK was 1st with a jackpot of 19 points, while Michelle COLEMAN added another 7 points.

Then, Finlay KNOX from TOR took 9 points for the 1st place in the 200m individual medley, to which Alberto RAZZETTI added another 6 points for the 3rd place. On the same distance for women Abbie WOOD from Breakers won quite predictably.

All in all, in the fight for the 3rd and the 4th places, the Breakers won two more distances in the first day. First, Alisja TCHORZ won without a jackpot in the women’s 50m backstroke, and then, Brendon SMITH took 15 points in the 400m medley (no jackpot + 6 points for the 1st place at the 200m mark). However, thanks to the 2nd and 3rd places of Luc KROON and Max LITCHFIELD, who were 4th and 2nd respectively at the 200m, TOR took the most points at this distance – 21.

The winner of the men’s 50m breaststroke was Nick FINK with a jackpot of 15 points, to which Oleg KOSTIN added 5 more points for the 4th place. In the same distance for women, the winner with the same jackpot was Lilly KING, while Molly HANNIS added 6 more points for the 3rd place to the CAC.

The Titans struck back in the men’s 4x100m freestyle relay, once again proving that Caeleb DRESSEL’s absence is critical for the Condors. TOR took a jackpot of 38 points, while CAC only got 14 for the 2nd place (both of those clubs’ second relay teams fell under the jackpot).

Afterwards, it was IRO who proved themselves: they took the most points in the men’s 50m backstroke: the 1st place went to Coleman STEWART of CAC (with a jackpot of 12 points), but Robert GLINTA and Guilherme BASSETO from Iron got a total of 13 points for finishing 2nd and 3rd.

The women’s 400m individual medley was won by Julia HASSLER who brought 16 points to the Titans (minimum jackpot + 6 points at the 200m mark); Kaersten MEITZ added 8 points (4 of them for the 2nd place at the 200m). Moreover, Barbora SEEMANOVA and Veronika ANDRUSENKO who took the 2nd and 3rd places also scored 20 points for their team Iron.

Before the two relays that concluded the first day, the Titans were leading with a 33 point difference.

The Condors’ solid wins in both combined relays (men’s and women’s) allowed the Americans to get very close to the Canadians.

The second day began with a victory of the Titans’ Kasia WASICK in the women’s 100m freestyle with a jackpot of 12 points, to which Michelle COLEMAN added 4 more points for the 5th place. However, Erica BROWN and Natalie HINDS got 13 points for the Condors for the 2nd and 3rd places.

Justin RESS won the same distance for men with a minimal jackpot, and Jesse PUTS got 6 more points for the Condors for finishing 3rd. Titans’ Blake PIERONI and Luc KROON together took 11 points – for the 2nd and 5th places.

Kelsi DAHLIA had a victory in the women’s 200m butterfly with a minimum jackpot, to which Katerina SAVARD added 6 points for the 3rd place. Titans followed with a 1-2 win by Alberto RAZETTI (jackpot of 12 points) and Jay LELLIOTT in the same distance for men.

Next came an even more impressive “double” in the women’s 100m backstroke as Kylie MASSE and Lisa BRATTON brought TOR 26 points. Meanwhile, Olivia SMOLIGA brought CAC only 6 for the 3rd place. Coleman STEWART responded with a jackpot of 15 points in the same distance for men.

At this point, the Canadian team was ahead of the American team by a rather comforting 30 points.

However, in the 100m breaststroke Cali’s Lilly KING made a jackpot of 19 points, that was added to her teammate’s Molly HANNIS 7 points for the 2nd place. In the same men’s distance, Condors’ Nic FINK was 1st (with a minimum jackpot), and Kevin CORDES was 3rd. As a result, the Condors were now ahead of the Titans by 3 points.

Then, it was time for the Iron’s signature distances: women’s 50m butterfly went to Ranomi KROMOWIDJOJO (with a jackpot of 12 points), the same distance for men went to Nicholas SANTOS (with the same jackpot); women’s 200m freestyle was taked by Barbora SEEMANOVA (with a minimum jackpot).

As for the leaders, CAC were more successful than TOR in these 3 events, taking 28 points against 18 and bringing the difference to 13 points.

The Titans came close to the Condors once again after a “double” in the men’s 200m freestyle – Luc KROON (no jackpot) and Blake PIERONI took the 1st and 2nd places, respectively.

After the 4x100m mixed relay, where the Titans took the first place, the two leaders had an equal number of points – 475 each.

In the men’s 400m individual medley, the last swim before the skins, Titans’ Alberto RAZETTI and Max LITCHFIELD had a 1-2 win. They scored a total of 27 points (they arrived at the 200m mark in 1st and 3rd places, respectively), while the Condors took only 5.

Such a situation predicted a fierce fight for the 1st place, however it did not happen, as probably the Titans were already exhausted.

The women’s 50m butterfly was dominated by Kelsi DAHLIA and Beata NELSON, who both reached the final. DAHLIA took the 1st place in the final round, while NELSON won in the quarterfinals. The semifinal was unique as there were 5 competitors: Louise HANSSON (TOR) and Melanie HENIQUE (IRO) shared the 4th and 5th places with the same result. Another representative from Iron in the semifinals was Ranomi KROMOWIDJOJO.

As a result, even without a jackpot, the Condors won 53 points in the women’s skin race event against 11.5 points that went to the Titans.

The intrigue was “killed” in the quarterfinals of the men’s skin race, as both TOR representatives – Shane RYAN and Cole PRATT did not pass to the 2nd round. Condors once again went to the semifinals in a pair, but this time it was Iron’s Robert GLINTA who entered the final with the world record holder Coleman STEWART and became the winner of the men’s skins.

However, the Condors still took the most points in the men’s skin race – 35 against Iron’s 33; meanwhile, the Titans only scored 5 points.

Thus, Cali Condors kept their chances for the Regular Season’s Champions title, while the Toronto Titans have lost it. Iron also saved their chances of avoiding the “match of death” to fight for a place in the play-off, while it has become inevitable for the Breakers.