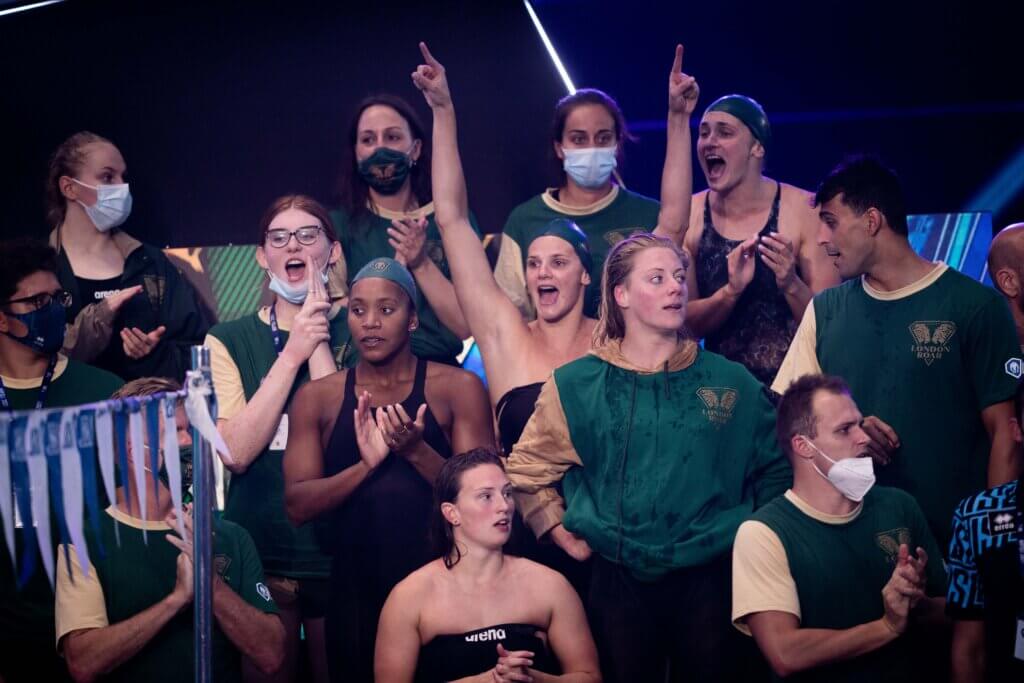 The sixth match of the Third Regular Season of the ISL, held on September 11th and 12th in Naples, showed the strength of London Roar (LON) and promoted the British club to the rank of one of the favorites of the season.

As for the so far unbeaten Cali Condors (CAC), giving 7-time Olympic champion Caeleb DRESSEL a rest on the second day, they levelled their chances with the Lions. The disqualification of Coleman STEWART in the 100m backstroke virtually decided the outcome of the battle for the 1st place.

In the battle for the 3rd place, the Italian club Aqua Centurions (AQC), staying in the last place throughout the entire match, managed to beat Japan’s Tokyo Frog Kings (TOK) in the skin races.

From the very first races of the match the struggle between the clear favorites – Condors and the ambitious Roar showed that it was going to be hard fought and unpredictable.

Kelsi DAHLIA of CAC beat Emma McKEON of LON by 0.24 seconds in the women’s 100m butterfly to win by 15 points. Then it was Caeleb DRESSEL’s turn: he beat Vini LANZA by a solid 1.3 seconds over the same distance of the men’s race and jackpotted 12 points, while Condor’s Marcin CIESLAK added 7 more points for the 3rd place.

In the women’s 200m backstroke, Roar’s Minna ATHERTON finished 0.18 seconds ahead of Beata NELSON and got a 19 point jackpot, to which Katie SHANAHAN added 5 points for the 4th place.

The Condors were victorious again: Lilly KING with a jackpot of 12 points won by nearly 3.5 seconds over Annie LAZOR in the 200m breaststroke.

In the same distance in the men’s event, Dayia SETO from TOK took the 1st place without a jackpot. On the first day he also won (with a jackpot of 12 points) the 200m medley where he beat the great Caeleb DRESSEL by elusive 0.02 seconds. Looking ahead, we can note that for the first time in ISL history the most valuable competitor (MVP) was a representative from the last-place team.

On the women’s 200m medley, two-time Olympic champion Yui OHASHI got the win for the Frogs (no jackpot). Another 1st place was taken by Paige MADDEN (12 points, including 3p for the 3rd place at the 100m mark) in the women’s 400m freestyle. Also, 11 points in the same distance were brought to the Tokyo club by Chihiro IGORASHI, who took the final 4th place, but was in the lead in the first 100 meters.

All these achievements of their leaders were only enough for the Frogs to take the 3rd place on the first day, ahead of AQC whose achievements were even more modest.

The Centurions finished with a “double” in the men’s 50m breaststroke with the efforts of Nicolo MARTINENGHRI (jackpot of 12 points) and Fabio SCOZZOLI. The same distance for women was taken by Arianna CASTAGLIONI with an equal jackpot.

Returning to the leaderboard, the Condors won the women’s 4x100m freestyle relay; the two CAC relay teams scored 32 points. The Lions had only one team score 12 points, from which a two-point penalty was subtracted for not placing second.

After the first 1/3 of the course, the positions of the teams were as follows:

Condors tried to build on their success: in the 50m freestyle in the absence of DRESSEL first place was taken by Justin RESS (jackpot). So the Condors scored 15 points in this race against 5 points by the Lions for 6th-7th places.

Emma McKEON won the same distance for women with a minimum jackpot. However, overall the Lions took less points than Condors: 12 points against 13.

After 2/3 of the first day the gap between the Condors and the Lions reached 41 points, while the Lions were only 17 points ahead of the Frogs; and the Centurions were 16 points behind TOK.

The turning point came in the men’s 4x100m freestyle relay, where even Caeleb DRESSEL couldn’t help the Condors in the last leg, with the first CAC team coming in only fourth and the second team coming in under jackpot. As a result, LON took a total of 38 points, while CAC – only 10.

Then, Kira TOUSSAINT took a modest victory in the women’s 50m backstroke (LON took 13 points here, CAC 12), followed by a brilliant result for the Roar in the same distance for men. Guilherme GUIDO took a jackpot of 19 points, and his teammate Christian DIENER added another 5 points for the 4th place. For the Condors, only Coleman STEWART was able to get 7 points for the 2nd place, coming 0.32 seconds behind GUIDO.

Another big win for the Lions came in the men’s 400m freestyle by Duncan SCOTT and Zac INCERTI bringing their team 22 points, while the Condors took only 5.5 points in the race. Interestingly, the 7th place finisher INCERTI was 1st after the 100 meter mark, taking 8 points and being overall 3rd-4th in the race.

The Condors won both men’s and women’s medley relays. This helped them narrow the gap with the Lions to 13.5 points.

After the first day, the positions of the teams were as follows:

This layout implied a fierce struggle for both 1st-2nd and 3rd-4th places. However, not having Caeleb DRESSEL on the second day, the Condors seriously reduced their chances of winning.

The first swims of the day were a hard-fought battle. Emma McKEON finished first in the women’s 100m freestyle (no jackpot), while her teammate Kim BUSCH took the last place, which brought the Roar 10 points. The Condors, however, got 13 points thanks to the 2nd and the 3rd place finishes by Natalie HINDS and Erica BROWN.

On the same distance for men, London’s Duncan SCOTT (no jackpot) and Katsumi NAKAMURA got a 1-2 finish. The Condors responded with a “double” by Kelsi DAHLIA (with a minimum jackpot) and Katerine SAVARD in the women’s 200m butterfly.

In the women’s 100m backstroke, Lions had another “double” by Kira TOUSSAINT (jackpot of 12 points) and Minna ATHERTON, who arrived ahead of 3rd and 4th place finishers Olivia SMOLIGA and Sherridon DRESSEL (Caeleb’s sister).

The final turning point in the match was the men’s 100m backstroke. The recent world record holder at this distance – set in the second match of the League’s 3rd Regular Season – Coleman STEWART, who came in first, was disqualified (after turning underwater for over 15 meters). His teammate Jose Angel MARTINEZ did not enter the course at all due to an injury, so, the Condors were penalized by 6 points. Guilherme GUIDO from LON took the jackpot of 19 points and his teammate Christian DIENER added another 5 points for finishing 4th.

Also, Condors’ “female” victories should be mentioned: Beata NELSON in the 100m medley (jackpot of 12 points), Lilly KING in the 100m breaststroke (jackpot of 10 points) and Erika BROWN in the 200m freestyle (no jackpot).

The Lions responded with wins by Duncan SCOTT in the 100m individual medley (with a minimum jackpot) and 200m freestyle. They also had a “double” in the 4x100m mixed relay with a non-standard distribution of the swimmers over the distances. Because of that, Kyle CHALMERS, having started last on the 4th stage with a gap of 6 seconds from the leader (Kira TOUSSAINT from the 2nd LON), caught up and overtook 7 girls who swam for the other teams.

As for the competition between the Frogs and the Centurions for the 3rd place, Daiya SETO continued to successfully score points for the Tokyo club. He won the 200m butterfly (jackpot of 15 points) and 400m medley (21 points – jackpot of 15 points + 6 points for the 1st place at the 200 meter mark). In the last course, the Frogs got 25 points in total, but the Centurions managed to partially level this success thanks to the 2nd and 3rd places of Ilia BORODIN and Chase KALISZ who brought their team 20 points.

On the same distance for women, Yui OHASHI took the first place and 19 points for the Frogs (12 points jackpot + 7p for the 1st place on the 200 meter mark).

Yasuhiro KOSEKI was another 1st place finisher for the Tokyo club in the men’s 100m breaststroke (with a minimum jackpot), while Alessandro PINZUTI brought the team 5 more points for the 4th place. Aqua’s Nicolo MARTINENGHRI and Fabio SCOZZOLI took second and third places, overall scoring only 2 points less than Frogs (13 versus 15).

Before the skin races the positions of the teams were as follows:

In the women’s butterfly skins, both Kelsi DAHLIA and Beata NELSON of the Condors reached the finals, where DAHLIA took the first place. TOK women didn’t even make it to the semifinals of the skins, giving AQC a chance to move up from the last place.

As a result, at the end of the women’s skins the Condors cut the gap with the Lions by narrowing it down to 19 points.

During the first round of the men’s freestyle skin race both AQC won and none of CAC swimmers made it to the semifinals. That already decided LON as the winner of the match.

In the skins semifinals the first 2 places went to Roar’s Katsumi NAKAMURA and Centurion’s Alessandro MIRESSI. This allowed the Italian team to move up to the 3rd place. The winner of the final round of the skins was NAKAMURA with 28 points.

Thus, London Roar interrupted the winning streak of Cali Condors, which lasted through the whole previous season and during two games in the current one. That said, it should not be forgotten that CAC gave their main “slaughterer”, Caeleb DRESSEL, a chance to rest on the second day of the match. As for the Aqua Centurions and the Tokyo Frog Kings, both teams still stand a chance of finishing in 6th place in the regular season and avoiding the “match of death” to fight for a place in the playoffs.