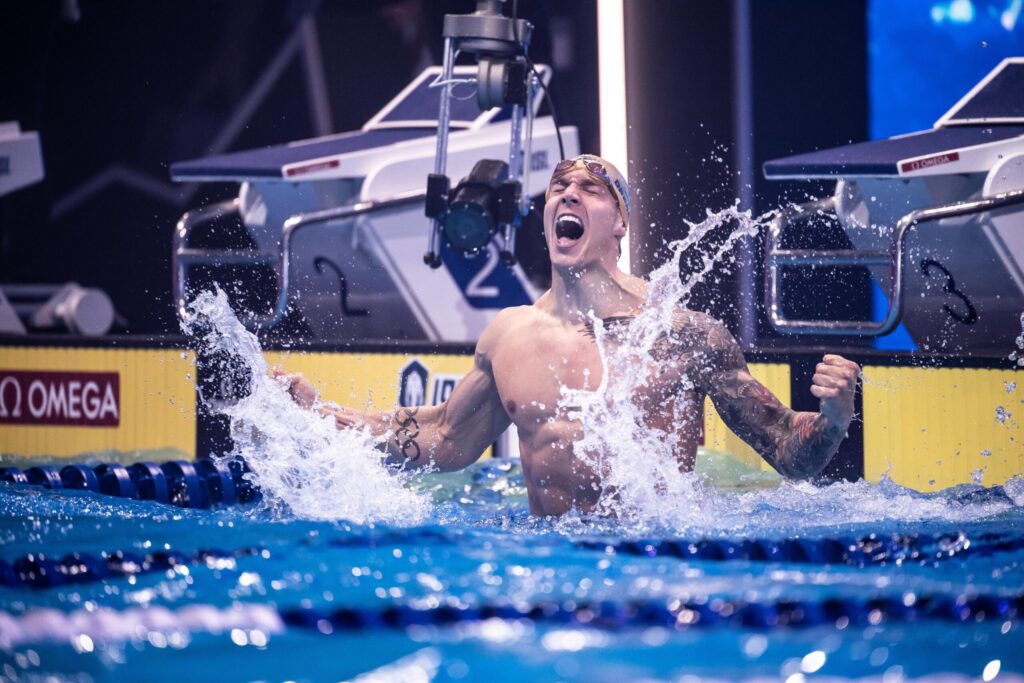 The most dominant male swimmer in the world today, Caeleb Dressel has achieved countless records, accolades and ground-breaking performances in his first few years as a professional athlete in the International Swimming League. But earlier this year, the Cali Condor captain reached a different type of milestone in his life.

Dressel married his longtime girlfriend, Meghan Haila Dressel, the day before Valentine’s Day, doing so in their home state of Florida.

“The best day of my life,” Dressel posted on social media following the ceremony. “Thank you for all that made this day happen.”

Caeleb and Meghan have been dating since 2013, having trained together as high school swimmers with the Bolles School Sharks in Jacksonville, Florida.

While Caeleb pursues his athletic career, Meghan is working as a therapist, having completed her Masters and Specialist degrees in Marriage and Family Therapy/Counseling.

“It’s been really fun,” he said. “I was a little worried about finding my routine with Megan because we have different schedules. I didn’t move in with Megan until after the wedding, and she’s not a professional swimmer. So, yes, we have very conflicting schedules. But it’s been great growing with Megan.”

Caeleb has also seen a distinct difference in their relationship since the ceremony.

“It’s only been just under two months so far, and I do see her differently now. She’s no longer my girlfriend. She’s my wife. We are one, one Dressel family. And I like that. I feel comforted by that.

“It’s been a special time, and I like the challenge of striving to be a better husband every day.”

While his personal life takes an important step, Dressel has been making some serious strides on the professional side of things since the ISL’s inaugural season in 2019.

In the league’s debut campaign, Dressel won Match MVP honors in all three of his appearances, highlighting the 2019 season by setting a new world record in the men’s 50 freestyle in the Grand Final.

Not only was Dressel the top-scorer in four of his matches, but he was also named Season MVP with a record-breaking 463.5 points, leading his Cali Condor club to the league title after finishing third in 2019.

To put the cherry on top, the 24-year-old broke four world records across three different events, producing the fastest times in history in the 50 freestyle, 100 butterfly and 100 individual medley.

Certain to be an indispensable asset in Season 3 as the Condors attempt to become the first club in ISL history to repeat as champions, we can only expect that Dressel takes things up a notch the next time we see him hit the water – it seems to be what he always does.

And having hit such a significant landmark event in his life outside of the pool, his motivation to continue down the path towards greatness in it may have just gotten even stronger.