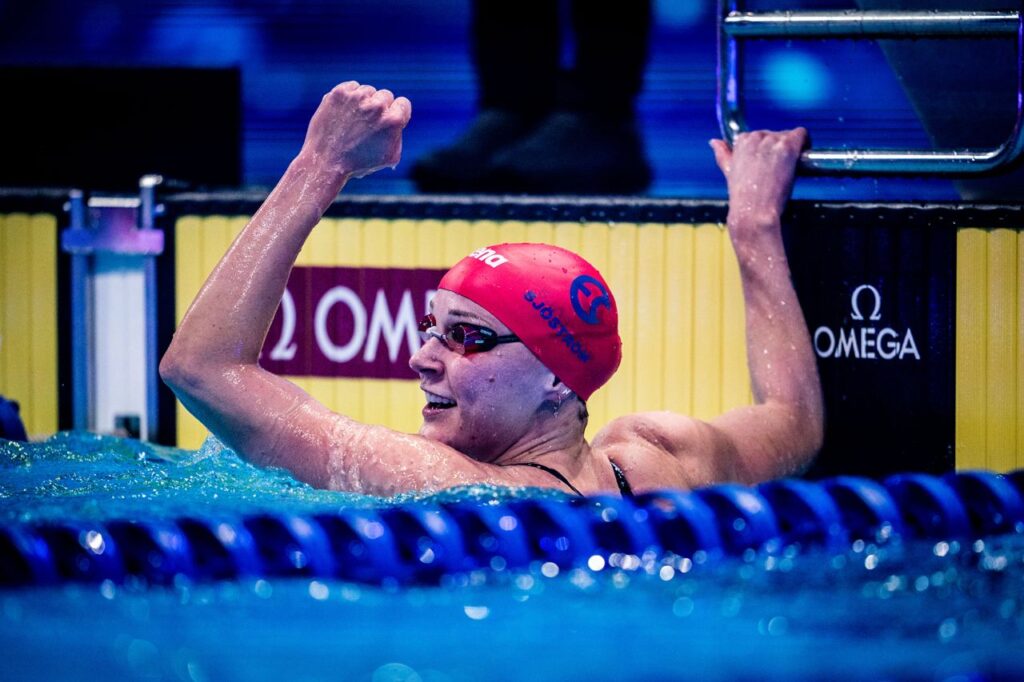 One of the International Swimming League’s biggest superstars, Season 1 MVP Sarah Sjostrom, was dealt a major setback in early February, breaking her elbow after slipping on a patch of ice in her native Sweden.

After immediately undergoing surgery less than 48 hours after the fall, Sjostrom is already well on her way on the road to recovery – announcing a return to the water (kicking only) at the beginning of March, three weeks after the incident.

Currently going through the various stages of rehab to get back to 100 percent, the 27-year-old Energy Standard co-captain was forced to start slow but is steadily increasing her workload as the time goes by.

“So the first week, I was just so tired after the surgery,” Sjostrom told the ISL. “I was in my apartment sleeping a lot, trying to recover. I did the rehab, but I could not do anything hard, anything that would make me sweat, because of the scar. Everything has to heal before I start really working. So, the first three weeks were easy in rehab on the bike.

“The process now is great. My flexibility and extension and inflection is getting better. So, I’m happy about this process. It’s actually going better than I thought.”

In the pool, we’ve come to expect Sjostrom to do things quicker than most. As it turns out, that also holds true in terms of recovery, as she’s ahead of schedule in terms of when she’s able to resume full training.

“From the beginning, my doctor said that I won’t be able to use my arms for a minimum of 12 weeks. That’s what he said after my surgery. But I saw him the other day for an X-ray to check my fracture and see if it’s healing probably – and it is.

“He said it’s no problem for me to start training (with my arms) after 10 weeks. So, I’m halfway. It’s only five weeks until I can start working a little bit more. It’s bad timing not to be able to train with my arms, but I’ll just have to do what I can.”

Instead of dwelling on the negative aspects of the situation, the current world record holder in six events is opting to view things differently, using the time to improve in other aspects she wouldn’t normally focus on – primarily her leg strength.

“So usually I have four hours training each day,” she said. “I go to the gym for one hour and typically work on the same exercises, but I now I have time to really work on my weakness, like my balance and making my legs even stronger.

“My upper body has always been so much stronger. My legs have always been my weakness. And now I have the time to work on that (in the gym), and I’m doing so much kicking. My legs are so tired right now.”

Sjostrom hopes all of this leg work will pay off down the line.

“Maybe at the end of the season, after taper, they will do something more for me.”

While Sjostrom says this is the most serious injury she’s dealt with in her swimming career, it isn’t the first.

During Season 2 of the International Swimming League this past October and November, held inside the successful COVID-19 bubble in Budapest, Sjostrom experienced back issues that kept her sidelined from Match 6.

The sprint freestyle and butterfly specialist bounced back well, winning MVP honors in both Match 9 and Semifinal 1, before helping her club to a runner-up finish in the Grand Final.

She’ll look to rebound in a similar fashion from this setback, eyeing a return to top form in time for both the Summer Games in Tokyo and Season 3 of the International Swimming League.

Sjostrom was crowned the ISL’s inaugural Season MVP during the 2019 campaign, scoring 243.5 points as she helped lead Energy Standard to the championship title. Despite missing one match in 2020, the Swede finished fifth overall in league scoring in Season 2 with 297 points.