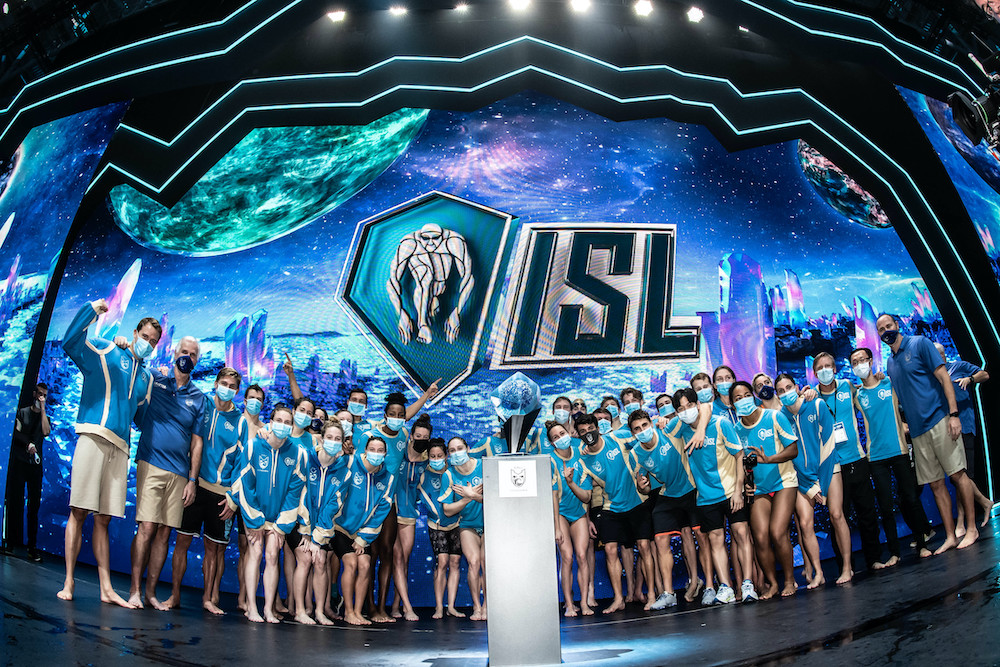 The Cali Condors powered to an emphatic victory in the International Swimming League (ISL) Grand Final on a day when two more world records were broken.

Condors’ superstar Caeleb Dressel lowered his own world best set in the 100m individual medley last week by 0.6 seconds. It was his fourth world record of the five-week competition.

The 24-year-old won three races today and topped the match MVP standings after earning an astonishing 96 points on Day 2 of the final at the Duna Arena in Budapest. He also topped the season’s MVP standings.

Asked about his favorite win, an elated Dressel singled out breaking his world mark in the 100 individual medley as “very special”. He destroyed the field to clock 49.28.

Speaking about the Condors’ triumph, he added: “The energy this team brings… you really want to be a part of it and you can see every time we step up to race.”

“Feeding off the energy has been great. It has been such a fun time being in this bubble. I can’t thank the ISL enough. This is the most fun time of my life.”

Condors’ general manager Jason Lezak was all smiles as he lifted the ISL Season 2020 trophy. “We came into this with the goal of winning and we’re undefeated. It doesn’t get any better than that.

“They came together as a team, that’s how we won this. We have superhumans on this team but it’s not won by individuals but by everyone coming together.”

“We came into this knowing it would be a tough challenge but they stepped up and I am proud of them.”

Britain’s Olympic gold medalist Adam Peaty broke the other world record on Day 2 of the final. He was again in red-hot form for London Roar, breaking his own world best in the 100m breaststroke in 55.41.

The San Francisco-based team never took their foot off the gas in the final, extending their unbeaten streak to six matches this season.

Dressel warmed up for his world record heroics with a well-executed win over the Standard’s Florent Manaudou in the 100m freestyle. His 45.08 was a new US and ISL record.

In the 100m individual medley, he burst off the blocks, hit all the turns smartly and finished with immense pace to grab the record. He went 1-2 with Marcin Cieslak, jackpotting everyone apart from his teammate to earn 37 team race points.

That put the Condors’ on the winning path, growing their lead to 69.5 points over the Standard at the first break – and they never looked back.

A long turn put paid to Dressel’s record hopes in the 50m butterfly but he touched home in a comfortable win over Tom Shields of LA Current.

Breaststroke supremo Lilly King was in imperious form, winning the 100m in a new ISL record before going on to win the 50m breaststroke skins for the fifth time this season. King beat teammate Molly Hannis in the final round, with the pair bagging 35 team race points.

Among other highlights for the team was Olivia Smoliga’s 55.04 American record in the 100m backstroke, the second fastest swim of all time.

Kelsi Dahlia said the Condors’ had trained hard. “There are tough people on this team and Jason did a great job. People stepped up. I am super proud. It means so much to the Condors.”

The defending champions fought valiantly but were no match for their US rivals today.

The Paris-based team picked up five wins, kicked off with victory for Chad le Clos in the 200m butterfly. The South African had to dig deep to see off the challenge of the Current’s Shields.

Kliment Kolesnikov sprung a surprise in the 100m backstroke, defeating LA’s Ryan Murphy after an impressive turn into the last 25m. “I was progressing for each match. I thought I needed to do something special so I just did my job,” he said.

Siobhan Haughey caused a shock in the 200m freestyle, putting in a strong finish to beat the rapidly advancing favorite Freya Anderson.

Sarah Sjostrom, one of the Standard’s stars this season, won the 50m butterfly, going 1-2 with teammate Madeline Banic to push Beryl Gastaldello of the Current out of it.

In the mixed 4x100m freestyle, the Paris team launched a fightback after the second leg to outdo Cali.

Emily Seebohm paid tribute to the Condors, saying they were “just too good” over the two days. “We gave it our best and unfortunately that wasn’t good enough. The Condors did so amazing. World records were being broken over and over, it was insane. That’s sport, that’s what happens,” she said.

“For us it’s back to the drawing board and what can we do better. I can’t wait for another season of ISL because this is amazing.”

Peaty’s 100m breaststroke record inspired London to a series of wins in the second half of the meet.

The Roar got some big points on the board before that when Duncan Scott defeated the in-form Townley Haas of the Condors to win the 200m freestyle in a new British and ISL record of 1:40.25.

Then came Peaty who went head to head with the Standard’s Ilya Shymanovich in the 100m breaststroke but had enough to win and bettered his world best by 0.09. The pair met again in the breaststroke 50m skins race, with the Brit securing a big points win.

London were dominant in the 400m individual medley. In the women’s race, Sydney Pickrem trounced the competition, coming in well ahead of the Condor’s Hali Flickinger. Scott showed his distance class again, going 1-3 with teammate Tom Dean.

Commenting on the season finale, general manager Rob Woodhouse said every race had felt like a world championship final and Cali were deserving winners, “Cali have got great depth. Jason Lezak has put a great team together. It’s a joy to watch them race.”

The Current could manage only two wins today. In a strong field of swimmers, some of their top talent just failed to edge out their rivals in close races.

Beryl Gastaldello got the team off to a great start with a confidence-boosting victory in the 100m freestyle, going 1-3 with Abbey Weitzeil. Later, she brought another big points haul by winning the 100m individual medley.

She led the race but was caught on the breaststroke leg before putting on the burners in the freestyle to get a 1-2 for LA.

After the match, Dylan Carter was full of praise for teammate Gastaldello, saying the Current had good momentum coming into the final having performed well through the season. He said it was an “incredible honor” to swim for the Current.

DIGITAL PLATFORM: Match highlights can be seen live on the ISL digital platform ISLand, which can be accessed here.