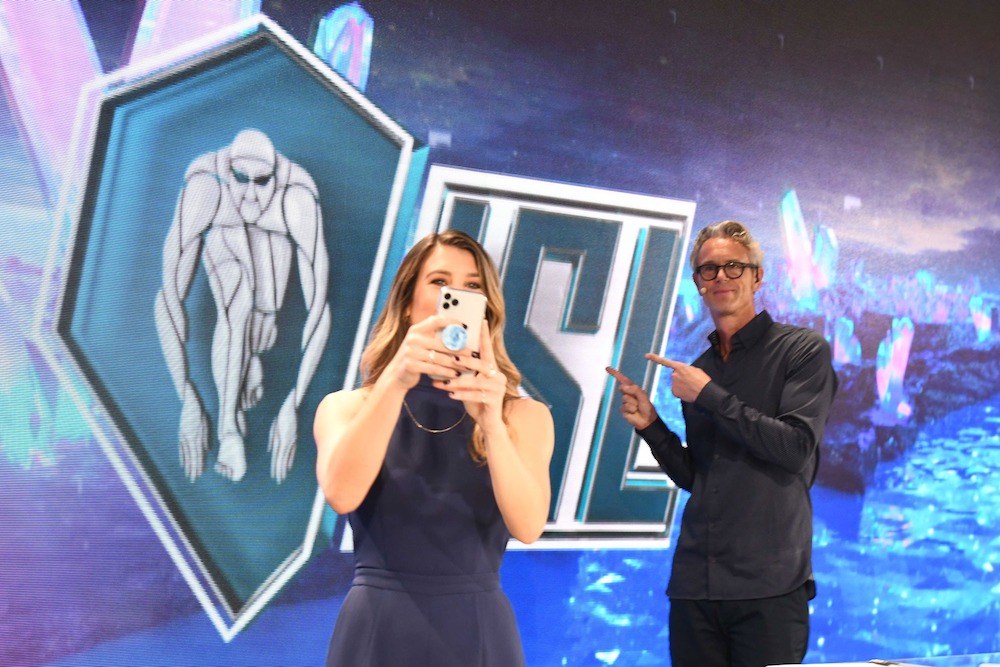 Mark Foster has spent the past month watching every moment of the International Swimming League (ISL) Season 2020 and there is nowhere he would rather be.

The former Great Britain swimmer is part of the host television broadcast crew, for which he performs the dual role of interviewing swimmers and coaches while providing expert analysis and insight.

It means that on match day he divides his time between the pool deck and television studio, helping to bring the races to life and give viewers the benefit of his 22 years competing at the highest level.

He will be on duty for the final two days of action when defending champion Energy Standard Paris takes on the Cali Condors, LA Current and London Roar in the Grand Final at the Duna Arena in Budapest on November 21 and 22.

Having enjoyed the best view in the house for all 10 preliminary matches and the two semifinals, Foster has been able to observe some of the new stars of swimming and watch as they step out of the shadows of the established names.

“What I’ve enjoyed is it is the new people who have emerged,” Foster said. “Take Emre Sakci on the Iron team. He was good, but now he has been great. I had not heard of him before, so it is almost like you are getting these new faces, new names, and the next generation.

“When you see someone flourish like Freya Anderson [London Roar]. She is my woman to watch in the next year. Seeing her go up against the world’s greatest swimmers and beat them on occasion and come close on others – we are seeing her blossom. She has been a standout.

“Beryl Gastaldello [LA Current] is stepping up and winning races. She is now a name and has become a name through ISL.”

Foster, 50, made his competitive debut as a 16-year-old at the Edinburgh 1986 Commonwealth Games.

Foster’s role meant he was the first to interview Kira Toussaint, Adam Peaty (both London Roar) and Caeleb Dressel (Cali Condors) after they broke world records during the semifinals – Toussaint in the women’s 50m backstroke, Peaty in the men’s 100m breaststroke and Dressel in the men’s 100m individual medley.

He is adamant that having world records broken in ISL will help give the tournament greater visibility and provide the swimmers with greater recognition.

“Swimming has some really good names and some really big names, and you always want to see the best swimmers on the planet because they’re the stars,” he said. “It is so exciting to see what the human body can do and how it pushes those limits.

“People always want to watch when something special happens, and they are special. They are rare and do not happen every day. It is exciting that swimming has those big names and there’s nothing better to show how good they are than by breaking world records.”

At the heart of ISL’s success has been the team ethic, based around the 10 teams, five from North America, four from Europe and one from Japan.

It means swimmers are competing for team points, rather than individual prizes in races where one point can affect where their team finishes.

It is a principle that the athletes have bought into and which they have demonstrated throughout Season 2020 by finding new and unique ways of showing their support from the team box.

“It is about touching the wall first and getting their team nine points,” Foster said. “It is what they are all so proud of doing.

“Their goal is for their team to win, yes, they want to win so that their team gets the points. That is what I have found so refreshing.”

The ISL is also helping swimmers make more of a living from swimming so that they can commit more time to their sport as a career.

Foster thinks doing so will help swimming gain even more visibility and retain the stars of the sport as they enter their 30s and beyond. Just as he did.

“I would like to see all swimmers become professional,” he said. “I do not want them to only be seen every four years at an Olympic Games or World Championships. It is about these guys being seen and being visible because they deserve it.

“I like seeing these guys knowing that it isn’t about scraping by. It becomes their job, and it becomes their living so they can stay in the sport longer.”

While Foster remained tight-lipped over who he thinks will triumph in the Season 2020 Grand Final, the experience of living alongside the swimmers in their bubble and watching the action unfold from poolside means there is nowhere else he would rather be.

“My passion is swimming and once I could not do it anymore the next best thing is to talk about it,” he said. “I still get to be around the greatest swimmers on the planet and I get to talk to them and share it with whoever is watching.”