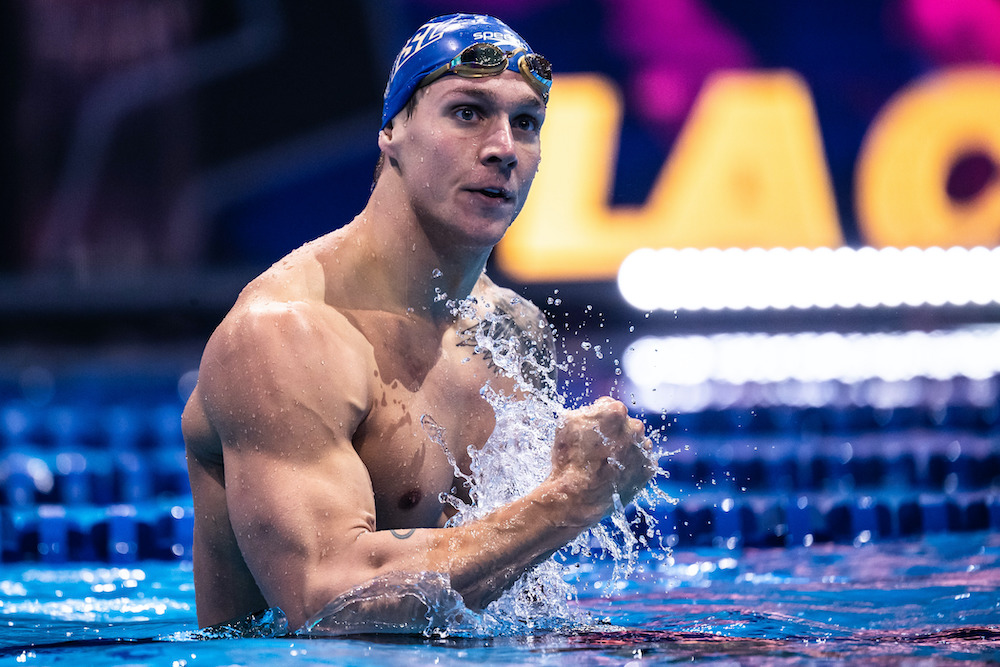 Caeleb Dressel became the first swimmer ever to dip under 50 seconds in the 100m individual medley, as Cali Condors punched their ticket to the International Swimming League’s Season 2020 finale in convincing fashion.

Smiling widely, Dressel punched the water in celebration after seeing the world mark had gone.

“He is definitely not human,” remarked ISL commentator Rowdy Gaines. “The best swimmer on the planet, bar none.”

The San Francisco-based team snuffed out the early threat from the LA Current to secure a comfortable win, extending their unbeaten run to five matches in the ISL Season 2020.

Along with Dressel, breaststroke supremo Lilly King and backstroker Olivia Smoliga were also in imperious form at the Duna Arena in Budapest.

A total of 10 race wins of the 19 staged today contributed to the emphatic victory. The Condors emerged victorious with 605.5 points after an intense two-day scrap for the top places with their nearest rival LA Current (462).

Hometown heroes Team Iron performed admirably and caused a couple of upsets, finishing third (340.5). In fourth were the Toronto Titans (303), who struggled to match the power and pace of the US big guns despite a valiant effort.

The Cali Condors and the LA Current advance to next weekend’s Grand Final where they line up alongside Energy Standard and London Roar in what promises to be an electrifying match.

The only undefeated team in Season 2020 owe a huge debt of gratitude to their superstars. They quickly built on their 27-point overnight lead – and never looked like relinquishing it.

After yesterday’s heroics, Dressel quickly got down to business, setting a high bar for next week’s final. He led from the blocks in the 100m freestyle and touched home in a new American record of 45.20. Teammate Justin Ress made it a 1-2.

The Florida native was in the mood for speed. His world record in the 100m individual medley was on when he put in a big breaststroke 25m on the third leg. After nailing the turn, he blasted for home and took all 37 points for his team.

In his third swim in an hour, Dressel clocked an American record (22.04) in the 50m butterfly, but came second behind Team Iron’s Nicholas Santos.

King also made a statement today. In the 100m breaststroke, her signature event, she went 1-2 with Molly Hannis. Afterwards she said: “I felt better today. I was definitely a little tired yesterday. It’s all good for the taper and for the final.”

The 23-year-old underlined her prowess in the skins race when she cruised through the rounds and beat teammate Hannis again in 29.15, not far off her best of the season (28.86) to bag 35 points.

The Condors other top swimmers showed their class to keep the points piling up.

Among them, Hali Flickinger put in an assured performance to easily win the women’s 200m butterfly, repeating her victory of a few days ago.

She later crushed the competition to win the 400m individual medley in 4:27.07, her best time by almost two seconds.

Commenting on the Condors unbeaten streak, she hailed her teammates: “It feels great. We came into this whole thing with the mission to make the final and potentially win. It’s great to have the momentum continuing.”

And she said Dressel’s heroics had inspired the team to greater heights. “I am sure everyone was really pumped up after that. I was ready to go. That was awesome.”

Dressel picked up another victory in the mixed 4x100m freestyle.
Condors’ general manager Jason Lezak was happy with the day’s work. “We didn’t come into this match thinking about anything but making the final. The performances were incredible. Everybody really stepped up as a team from top to bottom.”

After already beating Energy Standard, London Roar and LA Current in the regular season, he insisted the team is well-equipped for the final: “We know what to expect.

We know their strategies, so we feel pretty confident.”

Gastaldello stars for the Current

French swimmer Beryl Gastaldello was again outstanding as LA Current wrestled for control of the match from the first swim.

The 25-year-old went 1-2 with Abbey Weitzeil in the 100m freestyle. She followed it up with first place in the 100m individual medley, with teammate Anastasia Gorbenko notching second.

Tom Shields swam a PB and broke the US record in the 200m butterfly to secure a big jackpot win. His previous best time was set five years ago.

After missing out in the 100m backstroke, Ryan Murphy bounced back to conquer the 50m backstroke skins, seizing 37 points.
The Current took four wins in all.

Iron finish with a bang

The Budapest-based team sprung a few shocks on a strong second day in the pool when they secured five superb wins.

In the 100m backstroke, Robert Glinta crashed home in 49.64, pushing out the favorite Murphy of LA – 0.17 separated the top four swimmers.

Nicholas Santos showed at the age of 40 that age is no barrier by defeating Dressel and just missing a world record in the men’s 50m butterfly. He was fastest off the blocks but a poor turn cost him and he clocked 21:80, 0.05 outside the world record.

Emre Sakci dominated the 100m breaststroke, winning by half a second from the Current’s second and third-placed swimmers.

Rounding out a great finish to the meet, Leonardo Santos scorched to a PB (4:04.16) by some three seconds in the 400m individual medley.

Kromowidjojo heaped praise on the ISL for staging a great event and said she was glad to bring a lot of points for the team. “I am really sad to leave, I’ve had an amazing time. Being part of Team Iron is such an amazing feeling.

“I’ve been around international pool decks for about 15 years now and have never experienced anything like this.”

Pre-match head coach Byron MacDonald said the goal of Day 2 was to “knock off” Team Iron. “We’ve had a great competition,” he said, adding that there were plenty of tired bodies in the team after a grueling competition. “We had to work hard. I’m really proud of our team.”

The newbies to the ISL did well to reach the semi-final stage but couldn’t muster the points to better the Iron. As on Day 1, the Titans were unlucky not to score big in some races where they were nudged out of the top places in the final meters.

Shane Ryan claimed the team’s swimmers could walk away with their heads held high after making the semi-final.

“It was an amazing experience to be here with so many world-class athletes and to do what we do best,” he said. “The Titans were underrated and we were happy that we showed up and did and amazing job. Next season we will be stronger.”

MacDonald talked about his squad’s enthusiasm for the ISL. He said the next job was to “build a hell of a team over the winter for next season. I’ve talked to some of our swimmers and they have said ‘sign me up’.”

“There’s a lot of loyalty [of swimmers to teams]. We have to go out and find some swimmers who maybe didn’t swim this year. We have our eye on a few already.”