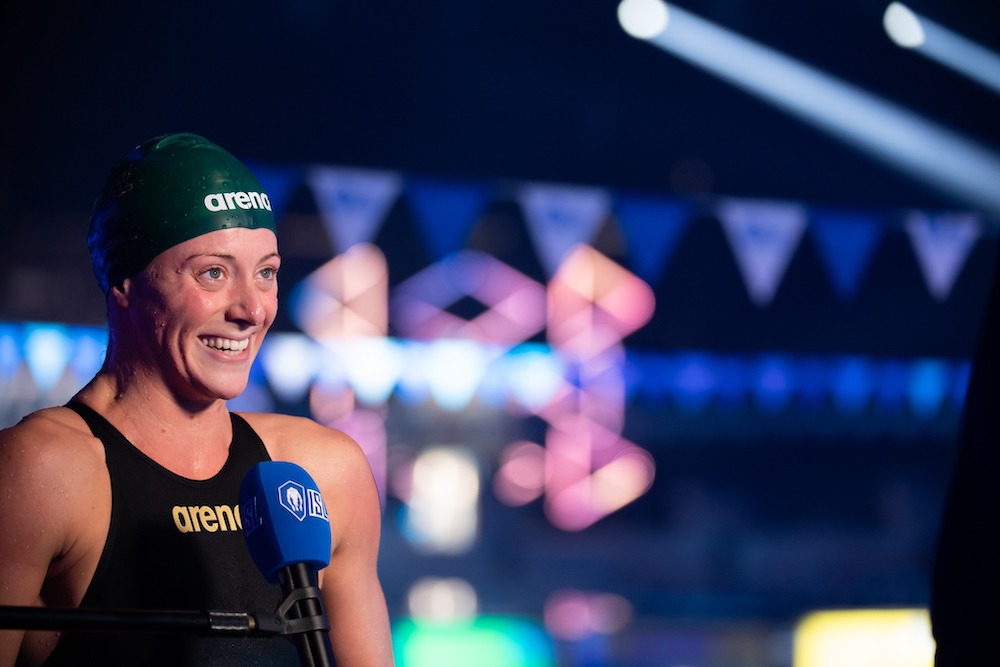 Kira Toussaint set the first world record of the International Swimming League (ISL) Season 2020 on the weekend, but finding time to actually celebrate the accomplishment has proved almost as difficult.

The Dutch swimmer clocked a world best 25.60 in the women’s 50m backstroke on Saturday, and she was immediately inundated with messages of congratulations and calls from friends, family and media around the world.

By the end of the day, she had received 180 messages on WhatsApp alone, without even seeing what had come in via her social media and more traditional channels. But with her record coming on Day 1 of the first semifinal, it meant that Toussaint had to remain in peak condition for the following day’s action at the Duna Arena in Budapest.

So sleep took precedence, the plan being to respond to all the messages only after she had helped her team, the London Roar, book its place in the Grand Final the next day.

“It has been insane since the moment the word record happened,” Toussaint said. “At 10 pm on Saturday night I said to myself: ‘Ok, now I need to turn off my phone because I need to get some rest because we have another day of racing.’

“I spoke with different Dutch media, so it is good that ISL gets some more attention in the Netherlands as well. I’m very sad that it isn’t shown on Dutch television, but I hope that with Femke (Heemskerk – Energy Standard Paris), Ranomi (Kromowidjojo – Iron) and I doing really well the Dutch media pick it up.”

The 26-year-old’s new time broke the previous record of 25.67 that Brazilian Etiene Medeiros set in 2014. Having taken the lead from the start, Toussaint came out of the turn on her side and raced clear in the second 25m to set the new standard.

It helped London finish second behind defending champion Energy Standard to qualify for the Season 2020 Grand Final that takes place on November 21 and 22.

However, it was a moment that may not have happened had Toussaint opted to return home for a training camp as scheduled rather than remain inside the Budapest bubble.

But stay she did, adding her first world record to the five golds she holds from the European Short Course Championships.

“Last December I was several hundreds of a second off the world record at the European Short Course Championships and from then it was something that really got me excited, really got me motivated and really pushed me through the hard practices,” she said.

“It wasn’t necessarily in my head that something was going to happen. It was completely not in my head because I had the 200m backstroke, and that really hurt. But because of that I was able to stay so relaxed and so calm. Because of that I did not expect it and sometimes when you do not expect things they just come.

“I am very proud that I got everything together because you really have to have the perfect race to get that time. I have had other races where certain parts of the race went really well and now everything came together, so I’m so happy with that and really proud.”

Toussaint’s success in the pool continues a family tradition. Her mother Jolanda de Rover competed for the Netherlands at the Los Angeles 1984 Olympic Games where she won gold in the 200m backstroke and bronze in the 100m backstroke.

Toussaint competed for the Netherlands at the Rio de Janeiro 2016 Olympics, having swum for Florida Gulf University and then the University of Tennessee on the NCAA circuit.

Before the semifinal the Amsterdam native had recorded two wins apiece in the 50m and 100m backstroke. Her world record time was followed a day later by London captain Adam Peaty, who set a new world record in the 100m breaststroke, and on Monday by Cali Condor’s Caeleb Dressel in the men’s 100m individual medley.

London will face Dressel’s Condors in the Grand Final, along with Energy Standard and the LA Current.

The Roar will be trying to go one better than Season 2019 when Energy Standard triumphed and Roar finished second.

Toussaint is confident she and her teammates can continue to be inspired by one another as they chase a first title.

“It is really, really fun to see how the whole team came together,” she said. “We put a lot of emphasis on the last meet of the regular season, people looked for a couple of tweaks they could focus on. Some rested, some tried some different things just to be ready for the semifinal and I think we did that. It was so much fun seeing people record personal bests or season bests or new records and the whole team did well.

“I was in the call room when Adam broke the world record for 100m breast and getting ready for the 4x100m freestyle relay. I was talking to people and saying this experience is amazing and saying I am going to stick around in this sport for so much longer because of this. I am having a great time here.”