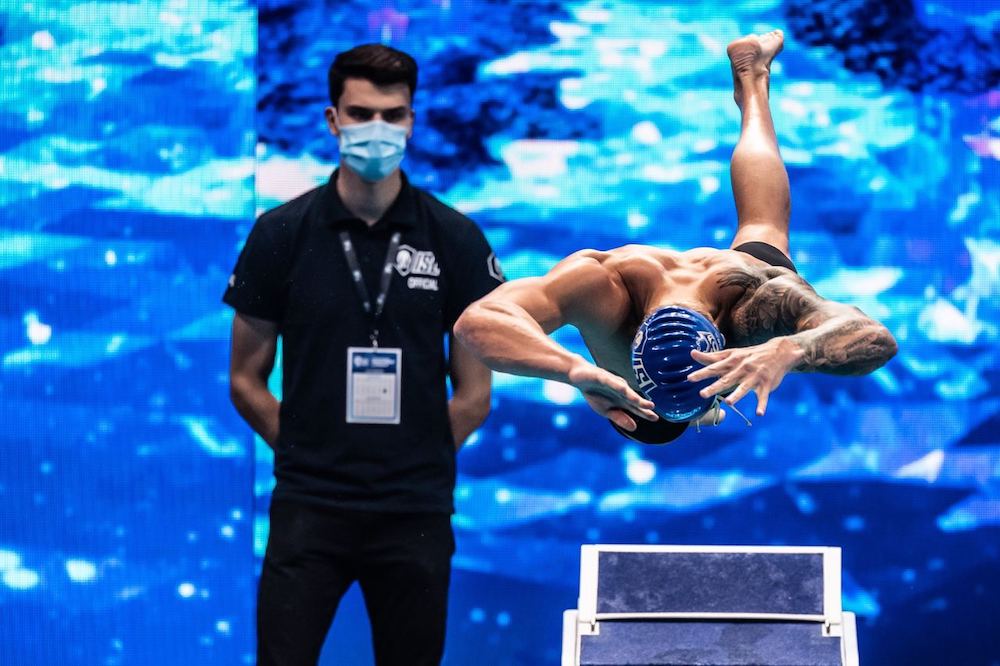 The Cali Condors cruised into the semis of the International Swimming League (ISL) Season 2020 with their fourth successive win after repelling a strong challenge from LA Current to win Match 10.

The San Francisco-based team won eight of Tuesday’s 19 races at the Duna Arena in Budapest. Caeleb Dressel was again in majestic form and topped the MVP standings at the close, while Lilly King was back to her best after two defeats on Day 1.

“We are pretty pumped with four wins,” said the Condors’ Beata Nelson, who secured two individual race wins on the first day.

“We’re definitely looking to the semis and finals, that’s where our team focus is. We are coming together and racing hard. I’m super happy about it and can’t wait for the next two matches.”

The Condors built on their 47-point overnight lead and extended it to thwart a lively Current assault. They ended with 558 points to LA’s 495. London Roar finished third (398) with the Aqua Centurions languishing in fourth (255). It was the Rome-based team’s last hurrah of the five-week competition, this year’s biggest sports event.

The Condors and Current scrapped hardest for top-three places in the opening races in a bid to lock up quick points and flip the scoreboard in their favor.

For LA, Beryl Gastaldello and Ryan Murphy were in scintillating form; the Frenchwoman won three races while the American showed his dominance in two.

The Condors took an unassailable lead into the skins races that brought the curtain down on the 10 regular season matches of the ISL season. But the points were shared to catapult the Condors well ahead and secure a comfy victory.

In a thrilling set of elimination races, the team from California outclassed the field in the women’s 50m breaststroke skins to scoop up 38 points. King was in a determined mood, beating teammate Molly Hannis in the final.

Another match win gives the only unbeaten ISL team huge confidence as they size up the competition for the semifinals, which start this weekend.

Dressel scorched to his 27th ISL career win in the 100m freestyle, and with 45.56 it the fastest time of season two. He underlined his prowess in another world-class swim in the 100m individual medley, clocking the second fastest swim in history (50.48) and a new US record, taking down Ryan Lochte’s 100 IM best.

The women’s 100m breaststroke was hyped as another showdown between Lilly King and Alia Atkinson of the Roar. In the end, the Condors star made it look easy, finishing with over a meter to spare.

Victory in the mixed 4x100m freestyle added 26 big points before King turbo-charged the Condors score with a comfortable win over teammate Hannis in the skins.

Beryl Gastaldello clocked a new French record in 51.16 to get LA off to a spectacular start in the opening 100m freestyle. She went 1-2 with Abbey Weitzeil. The Roar’s hotly tipped Freya Anderson, a quick finisher, was pushed into third.

Weitzeil also smashed the American record by almost four-tenths of a second coming in 51.26 as the Current secured 26 points. “I think we can get can only get better. That is the plan,” she said poolside.

Gastaldello grabbed her second win in the 100m individual medley – an ISL record time of 57.43 – and then added the 50m butterfly to cap a great day. She went 1-2 with Alyssa Marsh in the fly – only 0.05 seconds divided the top three swimmers.

Tom Shields stormed to a win in the men’s 200m butterfly, holding off the Condors’ Eddie Wang to record his fifth ISL win in the event.

Ryan Murphy added the men’s 100m backstroke to his three race wins yesterday. He won all three rounds of the 50m backstroke skins to collect some big points and conclude the meet third in the MVP standings.

Roar get louder after slow start

The Roar had a tough job on their hands to counter their US rivals early in proceedings.

Anderson picked up the team’s first win in the women’s 200m freestyle, saying afterwards that the coaches were experimenting with different race plans and she was improving.

The Roar had a clean sweep of the 400m individual medley races, their most impressive section of the day. Sydney Pickrem destroyed the field to win the women’s and earn crucial jackpot points.

“I feel good,” said Pickrem poolside, promising there is much more to come from the Roar. “This match was about having fun and doing a few technical things. It’s good to get the momentum going and get ready for the semifinals.”

Duncan Scott followed Pickrem’s lead with a gritty victory in the men’s race to propel the Roar closer to LA.

Olympic gold medalist breaststroker Adam Peaty was rested from this meet, meaning the Roar lacked the firepower to contest some races.

Having secured their semifinal berth, the Roar’s Greek swimmer Andreas Vazaios said the coaches had used the meet to try different lineups.

“Our goal is to be about perfect in the semifinals and even better in the final,” he said. “We keep learning strategies and tactics as individuals and as a team.”

Asked if the team lacked some firepower today, he said: “It was a hard turnaround. We raced two days ago, everyone is quite tired.

Regardless of the fact we had no Adam Peaty, we still have a lot of athletes who are ready to get the job done and score points.

“It was not our goal to win today but to learn from this. We keep getting better and we’re going to be ready for the final.”

Hungarian powerhouse Szebasztian Szabo gave the Centurions something to shout about on an otherwise lackluster day for the Centurions.

It was their last match in Season 2020 after finishing bottom of the 10-team standings throughout.

Szabo held off a Condors’ attack led by Dressel and Marcin Cieslak to pinch the men’s 50m butterfly and take 19 jackpot points.

Nicolo Martinenghi and Fabio Scozzoli were first and second in the men’s 100m breaststroke. But the team were short of depth to challenge the might of the Condors and Current.

But they finished well. In the women’s last race of the ISL, Martina Carraro and Arianna Castiglioni put in strong performances to make round two of the knock-out 50m breaststroke skins race, though they failed to advance to the final.

German swimmer Philip Heintz, who came a close second in the 400m individual medley, said he and the team were satisfied with what they had accomplished in Season 2020: “We were pretty happy with our results. The men did an amazing job and the women were pretty good, too. You just can learn by repeating [next year].”