CONDORS SEIZE CONTROL OF MATCH 10 AFTER BATTLE ROYALE WITH CURRENT 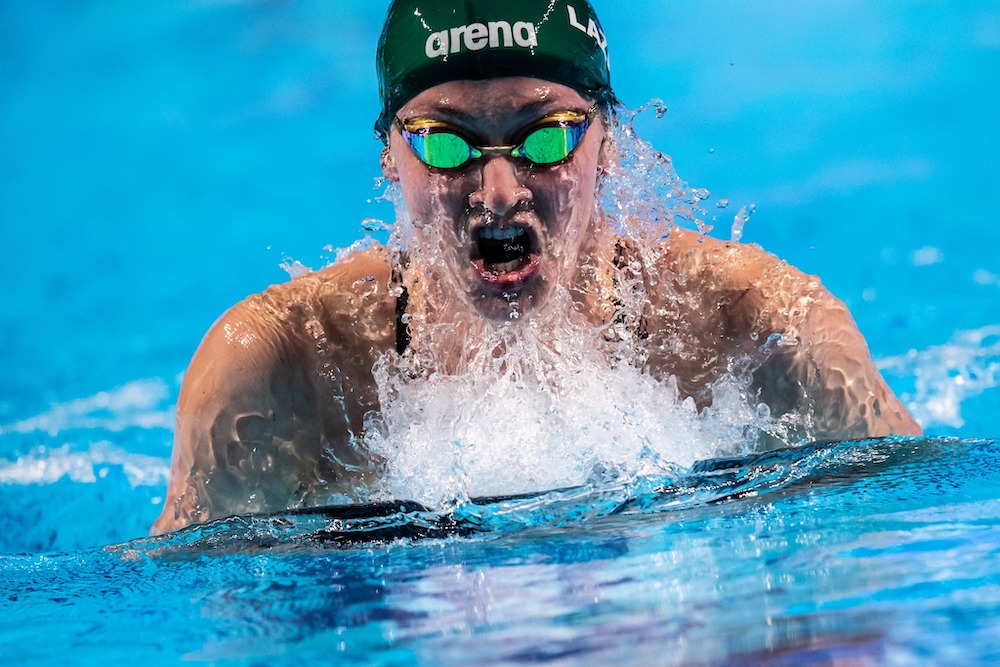 The Cali Condors hold a 47-point cushion over the LA Current after a day of sensational races in Match 10 of the International Swimming League (ISL) Season 2020.

On a day when Condors’ breaststroke queen Lilly King’s 30-race undefeated streak finally came to an end, there was plenty to cheer for the ISL’s global fanbase, with 13 of 18 races decided by less than a second.

“I think it’s the closest day of racing I’ve ever seen in any meet I have covered,” said an incredulous Rowdy Gaines, an ISL commentator.

The San Francisco-based team chalked up 285 points on the first day of action at the Duna Arena in Budapest. LA Current (238) are within reach, with London Roar (212) slightly off the pace and the Aqua Centurions far behind (142).

The Current got off to a winning start with Beryl Gastaldello and Aly Tetzloff going 1-2 in the women’s 100m butterfly, setting the tone for an entertaining Day 2 when LA mounted a mighty challenge to the Condors.

For the Condors, the ever-reliable Caeleb Dressel racked up lots of points along with Beata Nelson.

The Current fought back aggressively with the explosive Ryan Murphy winning three races. Abbey Weitzeil was on fire, too, clocking a lifetime best and a new American record in her 50m freestyle victory.

Under pressure from their heavyweight rivals, the Roar lacked a little spark but had a good middle section of the 20 races today.

Annie Lazor was King’s conqueror in the 200m breaststroke; she clocked a lifetime best to steal a win from under the nose of her US training partner.

The Aqua Centurions were chasing the pack all day, bar a couple of wins and strong performances in the distance races. But they struggled to accumulate points elsewhere.

The team coached by Jonty Skinner had opened Match 8 by winning six of the first eight races. But they couldn’t repeat that feat again today, as the Current set about disrupting their tactics.

Looking relaxed and untroubled, Dressel underlined his star status again with three wins – in the 100m butterfly, 50m freestyle (a fastest time of the season) and teaming up for the 4x100m freestyle. He clawed back the deficit on the Centurions in the last 10m of the team race to secure 18 points.

Nelson bagged two vital wins. She went 1-2 with Hali Flickinger in the 200m backstroke to collect some big jackpot points before edging out the Roar’s Sydney Pickrem by just 0.03 seconds in the 200m individual medley.

Molly Hannis put one over on her teammate King in the 50m breaststroke by 0.01 seconds, ending another unbroken record and pushing the Roar’s Alia Atkinson into third.

Also notable was Olivia Smoliga’s reverse of her loss two days ago to the Roar’s Kira Toussaint in the 50m backstroke thanks to a quick turn.

“We just came to fight in the last regular season match before things get interesting in the semifinals,” she said poolside. “It’s back to back racing and it’s what we love to do.”

The Condors held on to win a dramatic women’s 4x100m medley relay giving them the pick of the skins race that concludes Day 2.

Commenting on his team topping Day 1’s standings, head coach Skinner said: “It’s nice to be in that position. We have some great swimmers. I am really surprised how well we swam tonight, coming off a meet two days ago. I thought we would be a little more tired.”

Head coach David Marsh was delighted with his team’s efforts. “It was a really good day,” he said. “When we came out, we were looking for little improvements. We saw that. It hasn’t all come together but we have improved since the start of the ISL. There are some good signs for sure.”

The form of Murphy, Gastaldello and Weitzeil will be especially pleasing.

Murphy grabbed a big points haul with his wins in the 200m and 50m backstroke races, and was part of the victorious foursome in the medley relay.

Women’s 100m butterfly winner Gastaldello also claimed second in the 50m freestyle behind Weitzeil, who posted a new American record and destroyed her own personal best in the process.

Will Licon impressed to hold off the Roar’s Kirill Prigoda in the 200m breaststroke, the margin being just 0.09 seconds.

The Current have an advantage over their opponents on Day 2. After comfortably winning the men’s 4x100m medley relay, Marsh now gets to pick the stroke for the skins race.

While all the talk was of Lazor claiming King’s scalp in a PB of 2:17.04, the Roar can be satisfied with some useful point-scoring performances elsewhere, although there were few victories. Adam Peaty didn’t compete today.

Maria Kameneva was part of the four who stormed to a win in the 4x100m freestyle, edging the Condors by 0.04 seconds.

But in many races, the team couldn’t score higher up the board to keep pace with the leaders.

They led out the men’s 4x100m freestyle, with Szebaztian Szabo taking command with one leg to go. But Philip Heintz got nudged out of the top spot by Dressel.

In the women’s 400m freestyle, Valentine Dumont was unlucky not to win, with Flickinger of the Condors just touching home first.
The Centurions had a fine finish, performing strongly to come second in the men’s 4x100m medley relay.