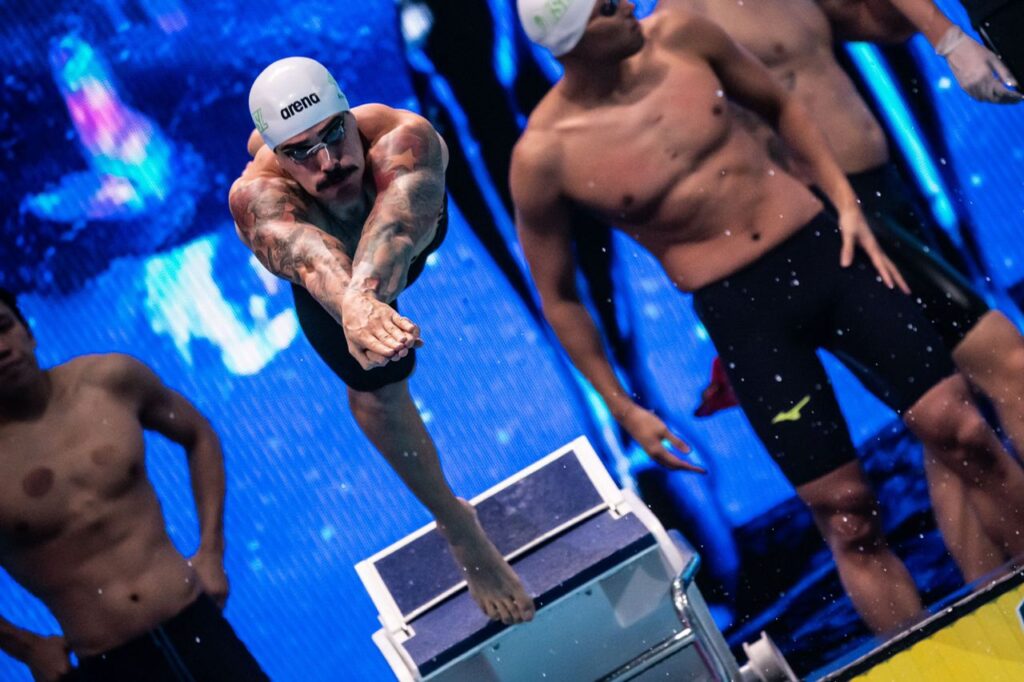 With James Gibson’s team assured of a place in the semifinals, his swimmers had the chance to demonstrate their strength and they emphatically took it with nine wins on Day 1 at the Duna Arena in Budapest.

ISL Season 2020 is the biggest sports event of the year and is being broadcast in more than 140 countries and territories around the world. Click here to find out how to watch the action.

The defending champion leads the Match 9 standings overnight with 300.5 points, the Tokyo Frog Kings are second with 235, Iron are third on 183.5 and the Toronto Titans are fourth on 155.

Sjostrom pegged back teammate Madeline Banic in the second 50m to win in 55.35, while Le Clos trailed Iron’s Nicholas Santos until the final turn, but held off the Brazilian to win in 49.33

“It was great, almost a second faster than my previous race,” Sjostrom said. “I’ve been working hard under water and I couldn’t be happier with this race.”

Evgeny Rylov secured another victory and a second one-two finish when he touched first in 1:48.62 to claim victory in the men’s 200m backstroke, narrowly ahead of teammate Kliment Kolesnikov.

Sjostrom then returned to the pool where she teamed up with Pernille Blume, Siobhan Haughey and Femke Heemskerk to win the women’s 4x100m freestyle relay in 3:29.43, and then added victory in the 50m freestyle when she got the fastest start and won in 23.42.

Benedetta Pilato kept the wins coming when she took the women’s 50m breaststroke in 29.13, before Danas Rapsys won another men’s 400m freestyle. He did so without the drama of his victory in Match 7 when he mistakenly stopped at the 350m mark and waited three seconds before he realized his error and continued his swim.

Pilato was part of the foursome that won the 4x100m medley relay, alongside Sjostrom, Emily Seebohm and Anastasiya Shkurdai, while the other Energy Standard team of Georgia Davies, Imogen Clark, Banic and Heemskerk ensured the team earned maximum points from the race by finishing second.

It was a result that Kolesnikov, Ilya Shymanovich, le Clos and Sergey Shevtsov matched in the men’s race, and means their victory in 3:22.08 puts Energy Standard in control of the match.

Bruno Fratus ended Tokyo’s wait for a first win in the match in the eighth race, when he battled hard against Iron’s Maxim Lobanovszkij to win the men’s 50m freestyle in 20.98.

Yui Ohashi matched Hagino’s performance in the women’s 200m individual medley. She finished in 2:05.10 to lead home a one-two with teammate Miho Teramura.

Natsumi Sakai kept the wins coming for Tokyo when she defeated a strong field in the 50m backstroke, while Takeshi Kawamoto tied with Toronto’s Shane Ryan in the men’s race after they touched home together in 23.10.

Leah Smith triumphed in the women’s 400m freestyle with a highly impressive performance. She pursued Energy Standard’s Haughey until the 350m mark when she grabbed the lead and then extended it over the final 100m to come home in 3:58.65.

Iron needed to be patient for the first victory, but when it came through Emre Sakci in the men’s 50m breaststroke, it brought the home team a much-needed 24 points.

He was not able to break the world record, as he nearly did in Match 7, but his time of 25.43 was enough to hold off Energy Standard’s Shymanovich and Felipe Lima.

It was Iron’s only victory, but six second-place finishes and one third was enough to push the Budapest-based team into third.

Lisa Bratton secured Toronto’s first victory of the match, but she had to fight all the way to the wall to hold off Energy Standard’s Seebohm to win the 200m backstroke in 2.01.77 and record her third 200m backstroke victory of Season 2020.

Kelsey Wog then continued her dominance in the women’s 200m breaststroke. She finished in 2:18.47 to make it four wins from four matches.

“I didn’t have the time I wanted, but I’m happy to have helped the team,” Wog said. “It’s all about the points and I’ll now have a couple of days to rest up and then hopefully I can go faster.”

Anton McKee ensured Toronto doubled up in the 200m breaststroke with his third win of Season 2020. The Icelander finished in 2:03.51 just ahead of Swedish teammate Erik Persson.

A North American pairing of Yuri Kisil (CAN), Michael Chadwick (USA), Blake Pieroni (USA) and Brent Hayden (CAN) enjoyed a dominant showing in the men’s 4x100m freestyle relay. The quartet pushed Energy Standard into second and won with 3:06.09 after Hayden touched home just ahead of Energy Standard’s Shevtsov.

Toronto’s Ryan added another victory in the men’s 50m backstroke, which he tied with Tokyo’s Kawamoto in 23.10.