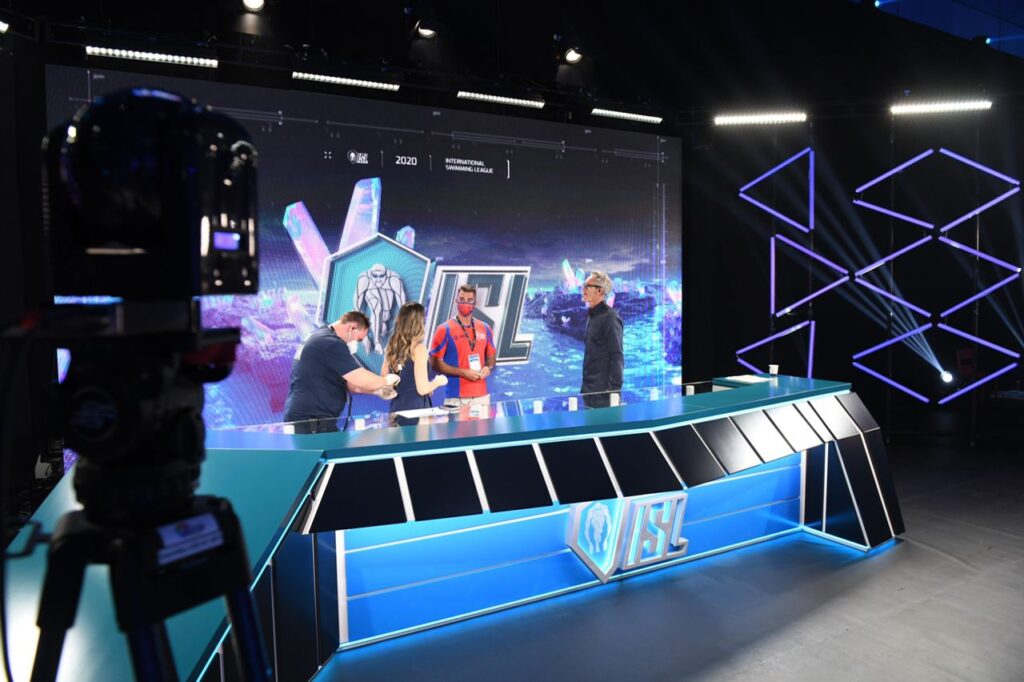 Bernie Guenther and Rowdy Gaines are bringing decades of broadcasting experience and swimming expertise to the commentary box at the Duna Arena in Budapest.

“Rowdy and I have called matches in swimming meets since 2004. He is the best of the best and Mark Foster is a legend in his time,” Guenther says. “Not only do we have the best swimmers but I feel like we are really lucky because I get to work with the best analysts on the planet as well.”

Hailed as the ‘voice of swimming,’ Gaines is a three-time Olympic gold medalist who has called some of the biggest moments in the sport over the last 30 years, including seven Olympics.

Guenther’s resume includes covering swimming at the London 2012 Olympics and a range of sports at the Vancouver 2010 and Sochi 2014 Games for Olympic Broadcasting Services. He’s also an in-demand play-by-play commentator for Fox Sports in the US.

After partnering for the inaugural season, the sports broadcasting giants are now in the COVID-secure bubble in Budapest – and as enthusiastic as ever about the newly expanded swimming showpiece. It’s the world’s biggest sporting event this year.

“It’s great to be back and even better this year with more matches, more teams. The addition of having the Tokyo Frog Kings and the Toronto Titans is not just big for the league but big for the sport in general,” Guenther says.

“This is a one-of-a-kind league because it represents so many different international teams. You get to see them compete against each other a whole lot more.”

Asked how he compares the five-week competition to swimming at the Olympics, he singles out one major similarity: “You still have the biggest athletes … the same athletes that you’d see in Rio 2016 or Tokyo 2020 are here competing in the ISL. That to me is a huge win.”

Praising the cutting-edge technology being used in the TV production for Season 2020, which is adding to the excitement and drama in the pool, he believes the ISL is raising the bar in terms of what is possible when delivering a global swimming competition.

What excites him most? “I love the skins races. But I think it’s big to see some of these athletes that have never seen this team dynamic get to compete for two hours in the pool,” he says.

“To see the Frog Kings [athletes] watching and Hagino wins a race and how the team box lights up,” he explains, referring to the designated poolside areas where teammates can cheer on those competing.

“DC Trident are on the way home but man did they get excited every time Zach Apple pulled an upset … he beat the World Champion Caeleb Dressel. The enthusiasm is certainly unbridled.”

Guenther considers the ISL’s format “revolutionary” to the sport, pointing to the compressed format of races compared to typical swimming meets, which often include morning and evening sessions.

“You get to see the world’s best athletes compete for two hours straight, back to back to back. I would think for the swimmers it’s the ultimate challenge,” says Guenther, who is meticulous in his preparations for each match, ensuring he calls each race with the authority for which he is renowned.

The ISL has been flexible and quick to make improvements to aid the TV commentary team.

“Over the last couple of matches, we’re working on trying to get the jackpot points calculated a bit quicker so I can get that on air,” he says. “I think they are making some great adjustments on the fly to make it better for us to call the matches.”

The American commentator also commends the ISL for introducing an event rating system for 2020. “That really does help people get a good grip on how important this or that race is, so people can know ‘hey, we really should pay attention to this.’”

“From season one to season two, they have built out a whole lot more tools to help us try to continue to tell the story of what the athletes are,” he adds.

The ISL has expanded its global reach for Season 2020. It’s being broadcast in 140 countries and territories, including CBS Sports in America, CBC in Canada, the BBC in the UK and beIN SPORTS in France and Turkey, 24 countries in the Middle East & North Africa, and 10 countries in Asia Pacific.

“That’s what’s going to really help us grow the sport, the fact that people get to watch these match-ups, learn the teams, find their favorite team,” Guenther says.

“That’s really our next evolution … we need people to start picking a team and rooting for them. That’s when things start to get really fun when they’re tuning in to see if their London Roar is going to take down Energy Standard this week or if Tokyo is going to be better than Toronto, and so on.”

He is confident the ISL will go from strength to strength in the coming years. “The future is huge for the International Swimming League,” he says.

“You have the greatest athletes on the planet and they have all bought in. The sport now is in a two-hour window and I think it is something that for years to come the athletes and fans are going to really enjoy.

“The ISL, which is ‘swimming reimagined,’ is going to help grow the sport and certainly help grow the audience. Hopefully we will have some passionate fans watching swimming. It’s going to be a wild ride I think.”