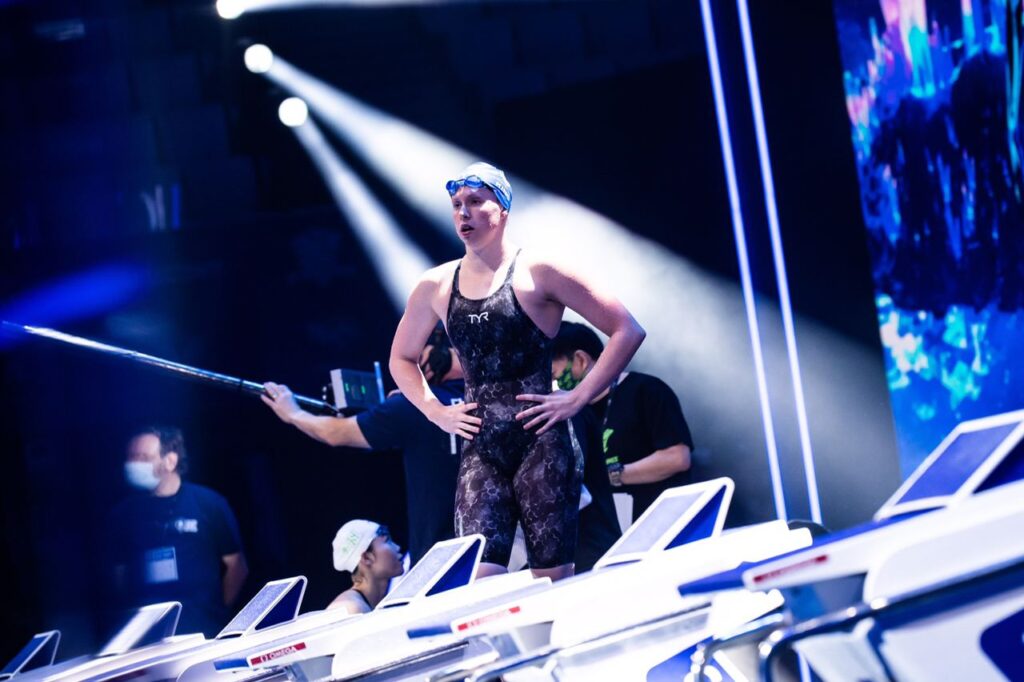 Caeleb Dressel and Lilly King maintained their rich vein of form in the International Swimming League (ISL), helping the Cali Condors overcome the challenge from London Roar to win Match 8.

The San Francisco-based team won eight of Friday’s 19 races in a sensational Day 2 at the Duna Arena in Budapest. Dressel and King topped the MVP standings after reinforcing their superstar credentials over two days of thrilling racing.

Dressel won three individual races before coming unstuck in the energy-sapping skins finale, perhaps a race too far. King had another outstanding day, beating fierce rival Alia Atkinson of the Roar in both the 100m breaststroke and the skins final.

“She’s just so consistent and at the moment she is on fire,” said poolside pundit Mark Foster. “What’s so impressive is how quickly she recovers after each race. It never hurts when you win.”

After three weeks of high drama in ISL season two, the match-up between the Condors and Roar – the only two unbeaten teams remaining – was touted as “the biggest day of the season” by the pundits.

It’s the first of two matches between the Condors and Roar in the space of five days; the two square up again in Match 10 on November 9 and 10, the final meet of the regular season before the semifinals, along with the LA Current and Aqua Centurions.

The US team held a narrow points lead coming into Day 2 of the biggest sports event of the year.

The Condors and Roar dominated the opening exchanges to gather quick points. But the Frog Kings were delighted with their performance. As the Breakers struggled for points, Tokyo pulled off a couple of upsets and won five races in all.

Dressel got the Condors going by winning the 100m freestyle in supreme fashion, with Justin Ress making it a 1-2 finish. He went on to score firsts in the 100m individual medley and 50m butterfly.

Eddie Wang came from behind and outpaced the competition in the final 50m of the 200m butterfly to get more valuable points. And Townley Haas cruised to a victory in the 200m freestyle.

Commenting on the battle with London, Haas said: “It was a great meet, a pretty tight race the entire time. But we were able to get the win so that was huge.”

King showed why she’s queen of breaststroke and remains unbeaten in ISL seasons one and two. Her defeat of world record holder Atkinson in the 100m breaststroke, which went down to the touch, gave her a psychological edge going into the skins.

The Condors had chosen the breaststroke for the skins to play to their strengths – and King duly delivered. She won the opening two rounds and then got bragging rights with a final flourish to bag 33 points for the Condors.

King now has a staggering 30 wins from 30 races in her ISL career.

Asked what it was like watching King from the sidelines, Haas said: “She’s just incredible to watch. It’s hard to put in words how great she is in the water. She’s all about the team and lots of fun.”

Condors’ General Manager Jason Lezak was pleased with the team’s overall performance: “It feels good. I knew coming in today that it would be a tough battle. But we got off on the right foot and held on.”

Freya Anderson was the star for London, kicking off proceedings with a stunning victory in the 100m freestyle, her teammate Marie Wattel coming third.

She also timed it right to claim the 200m freestyle and again put on the gas to claim the spoils in the mixed 4x100m freestyle, grabbing 18 points for the Roar. Kira Toussaint beat her archrival Olivia Smoliga to take the 100m backstroke.

But Tokyo’s Yasuhiro Koseki took down Olympic champion Adam Peaty in the 100m breaststroke and London missed out on point-scoring opportunities elsewhere. They were jackpotted in the women’s 200m butterfly, losing their points.

Vini Lanza, who came third for the Roar in the men’s 200m butterfly, said: “You always have races that don’t go your way. We know we can get better, we can build from this. I think the team spirit was great, we fought to the end. I’m very proud. I can guarantee we will be better in the future.”

Peaty redeemed himself with a powerful display of sprinting in the 50m breaststroke skins race to edge out Koseki and claim 33 points.

Suzuka Hasegawa’s shock win over the Condors’ Hali Flickinger opened Tokyo’s account. And they continued to thrill and surprise throughout the meet.

Ryosuke Irie secured a comfortable win in the men’s 100m backstroke before Koseki upset Peaty in the 100m breaststroke with an astonishing turn of speed.

Tomoru Honda snatched an impressive second in the men’s 200m Butterfly and Miho Teramura grabbed third in the women’s 100m individual medley as Tokyo got on a roll at end of the match.

Tokyo dominated the 400m individual medley races. Yui Ohashi cruised to a win in the women’s race, her third win in the distance this season. Kosuke Hagino did the business in the men’s contest.

Frog Kings head coach Dave Salo was delighted. “It’s wild and wicked … the 100m breaststroke was a big surprise. They’re [the Condors and Roar] thinking about each other and not thinking about us. We did a pretty good job today.”

The Breakers couldn’t raise their game in the pool today, with points hard to come by.

The team recorded only one win. Arina Surkova nicked the 50m butterfly at the death in a closely fought race. Kasia Wasick went out fast in the women’s 100m freestyle but got squeezed out of first by Anderson, coming second.

The Breakers got some crucial points with a second and third in the men’s 400m individual medley but it was too little too late.

For Belgian sprint freestyle specialist Pieter Timmers, Match 8 signaled the end of his career. The Rio 2016 Olympic silver medalist had been planning to retire at the Tokyo Olympics before the COVID-19 pandemic hit but decided to bring the curtain down in Budapest.

Part of the Breakers’ team that came third in the mixed 4x100m freestyle and fourth in the men’s 100m freestyle, he also competed in several other races at this meet.

“I’m going to retire now, this was my last race. I really enjoyed it. It’s been a long four weeks so I’m happy to go back to my family now,” he said.

“I lived this day like I am going to remember it. The team had celebrations for me … and they cheered so loudly it gave me some goosebumps. It was really nice to go out with a blast.”