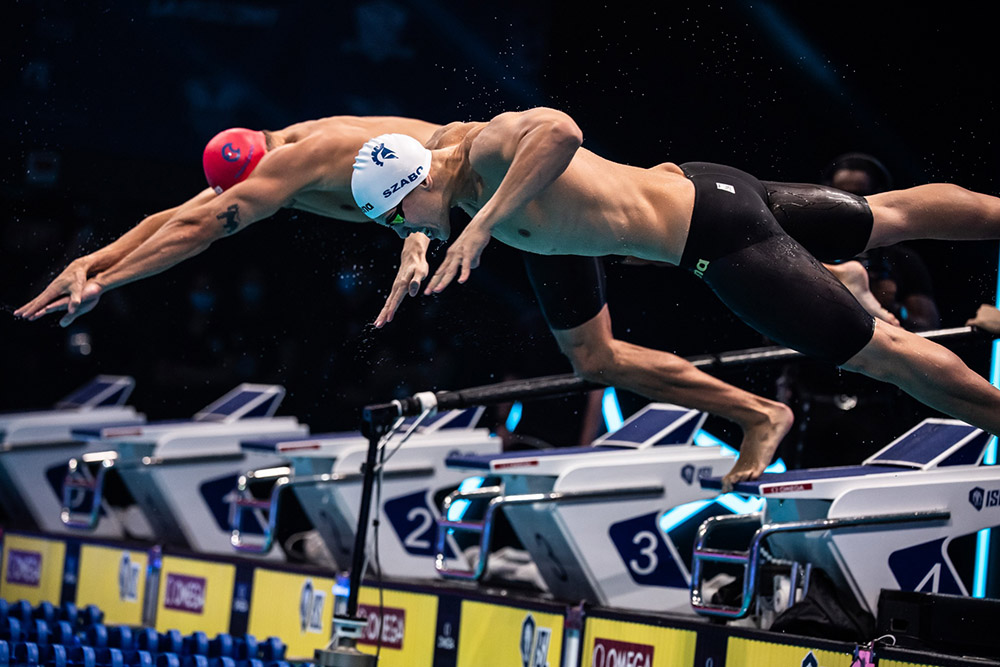 Energy Standard built on their opening-day heroics to outclass their rivals and secure an emphatic win in Match 6 of the International Swimming League (ISL) Season 2020.

The Paris-based team held a 38-point cushion over the Toronto Titans heading into today’s 19 races. But they quickly extended that margin and went on to dominate the contest.

The Standard notched up 12 wins on Day 2 to claim an astonishing 22 of the total 39 races, leaving their competitors to battle for second spot.

The Titans found it hard to capitalize on their opening-day successes. But back-to-back wins in both 100m backstroke races and a strong final 30 minutes in which Kylie Masse won an exciting women’s 50m backstroke skins race ensured their second-place finish.

There were flashes of brilliance from the NY Breakers and Aqua Centurions, but the story was all about how many points the Standard would chalk up.

Their comfortable margin of victory after some stunning performances was the perfect way to open the third week of the second ISL season, the biggest sporting event this year.

All this was achieved without the Standard’s versatile Swedish star Sarah Sjostrom – MVP of ISL Season 2019 – who is recovering from a minor back injury.

It was the Standard’s first match win this season, and Sjostrom said she expects the competition to only get tougher from here on in. “We know it’s going to get harder and harder when everyone gets tired. It’s going to be tough to get points in the semifinals,” she said.

In a pre-match briefing, head coach James Gibson had told his team that the priority was to look after their emotional energy and “take care of business” in the pool, with harder matches still ahead.

Immediately afterwards, he was full of praise for his swimmers for delivering a “very solid performance.”

“I’m really pleased with the guys, it’s part of a long process. We are still chasing the [Cali] Condors, they are the favorites. But we are going to give them a good run for their money.”

The Standard opened their account with two wins in the first four races, which was the springboard to further resounding victories.

Siobhan Haughey starred with a superb 100m freestyle to hold off the Breakers’ Kasia Wasick for first. She went on to claim the 200m freestyle, setting a new ISL record and recording the fifth fastest time ever in 1:51.42 seconds.

“The whole meet is really fun, that’s why I am swimming really fast. I have put a lot of hard work in,” she said on the sidelines after bagging 24 team race points.

South African Chad le Clos got back on track after a disappointing first match, swimming a clever tactical race and putting in a huge sprint finish in the final 50 to win the 200m butterfly. “I wanted to control my races better, not rushing it or going out too slow. It was a lot of fun to get back to winning ways. I still believe I have a lot more to give,” he said.

Anastasiya Shkurdai caused an upset in the women’s 100m individual medley, narrowly beating the favorite Abbie Wood of the Breakers. She was delighted to secure her second win of the meet following the 100m butterfly on Sunday: “I’m very happy with my best results. My team was great.”

Benedetta Pilato, the fast-rising 15-year-old breaststroker, claimed the 100m to add to yesterday’s win in the 50m.

Florent Manaudou also had a superb day, snatching a last-gasp win in the men’s 100m individual medley. He rounded out the meet with a dazzling display in the 50m freestyle skins.
After winning the men’s 4x100m medley relay yesterday, the Standard’s coaches got to choose the stroke for the final race of the day.

It was a no-brainer after Manaudou’s blistering win in Sunday’s 50m freestyle. And he did the business in a thrilling three rounds of skins races featuring some of the world’s fastest men.

Szebasztian Szabo of the Aqua Centurions challenged him all the way in the finale, but Manaudou put on the burners in the final 25m to touch home first and earn 32 points.

Kylie Masse got the first points on the board for the Titans when she won the 100m backstroke, an easy win that bagged 21 jackpot team race points thanks to Lisa Bratton’s third-place finish. Shane Ryan emphasized his dominance in winning the men’s race.

Tessa Cieplucha sprung a surprise in the 400m individual medley by overtaking Wood of the Breakers in the closing stages to pinch the win.

The Titans didn’t regret their choice of backstroke for the women’s 50m skins race. Masse’s sensational form continued as she cruised to victory over the Standard’s Emily Seebohm to collect 38 points.

“Winning that 400m individual medley was so awesome, giving us control of the skins. We obviously have a really strong backstroke team,” Bratton Said.

“It’s an added bonus getting to train with Kylie day in and day out. It’s been fun seeing what some other people do because I have never trained with her before.”

Despite third place after a struggle to gain points on Day 2, British individual medley specialist Abbie Wood said the Breakers have capacity to get better.

Boglarka Kapas led a 1-2 in the women’s 200m butterfly, the only win for New York today. But the Breakers pushed their rivals to the wall in a number of races.

“Being on the Breakers has been such a laugh,” Wood said. “There’s no pressure on us and it’s starting to reflect in the swimming. I think we are getting stronger and stronger in each meet.”

On a personal note, the 21-year-old said she has really surprised herself in Budapest, with each match “getting better and better.”
“To come away with a handful of PBs and a British record, it’s more than I ever thought I’d do.”

The Rome-based team had an up and down day. They started well with Alessandro Miressi’s win in the 100m freestyle and ended with Szabo’s superb skins races.

In between, Szabo grabbed the ISL’s global spotlight when he laid down the third fastest time in history (21.86) in the 50m butterfly to land a massive jackpot win of 24 points for Centurions and end a run of five Standard wins on the bounce.

Mykhailo Romanchuk, who moved from the Standard to compete for the Centurions this season, agreed that it had been another great day for Szabo but was far from dejected about the overall result for the Centurions.

“No, we are not disappointed with the team,” he said. “The men’s part of the team is really good and for the women’s we are a little bit weak. But I hope next year we’ll be stronger and better from meet to meet.”