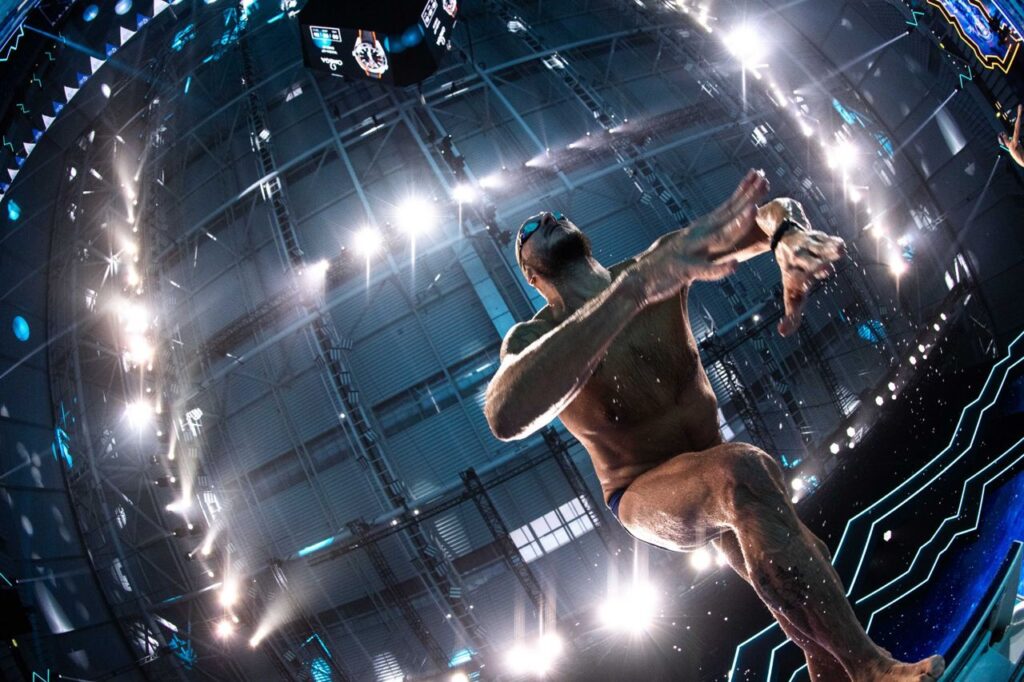 Guilherme Guido has challenged his London Roar teammates to keep raising their levels as the team aims to go one better in International Swimming League (ISL) Season 2020 than they did in Season 2019.

The 2019 runner-up has won two matches from two, the second coming on Saturday with victory over the LA Current, Tokyo Frog Kings and DC Trident with a total of 499 points.

Guido played a big part in London’s latest victory by reaching the wall first in the men’s 50m and 100m backstroke races.

“The races are getting faster and we are expecting to get better each match,” Guido said. “We knew it was going to be hard against LA and Tokyo, so it was really nice to win the 50 and 100 backstroke.

“It’s an honor to swim against Ryan Murphy and Ryosuke Irie [of the Tokyo Frog Kings]. All three of us together in the 100m places. I’m really happy to win the two races in this match and am looking forward to helping the London Roar again in the next one.”

The Roar will next be in the pool for Match 8 on November 5 and 6, where they come up against the Condors, NY Breakers and the Tokyo Frog Kings again.

Roar head coach Melanie Marshall praised the spirit of her team after the match but admitted that her swimmers need to work on the “details.”

It is something that Guido has done, and he appears to already be reaping the benefits.

“I haven’t raced since December, so the first match was a little bit weird, especially the 50m on the turns,” Guido said.

“But I felt a little bit better on the next ones after I worked on them, so I expect to improve. Especially more on my start, which would help me a little bit more in the first 25m.”

Guido has now broken the 50-second mark in the 100m 17 times in his career and his form in Budapest is as good an indication as any that the Roar has what it takes to win the title this season.

London’s Match 5 victory meant that the Roar became the second team to win two matches from two in Season 2020 along with the Cali Condors, but it was LA that finished top of the overall standings having raced in one match more.

The Current will have to wait until Match 10 on November 9 and 10 before competing again, a layoff the Roar and Condors will hope could result in a dip in form.

London Roar General Manager Rob Woodhouse isn’t about to wait for his opponents to slip up, however. Instead, he prefers to take destiny into his own hands.

Woodhouse has been banking on his team to continue improving throughout the five weeks of competition at the Duna Arena, as some of his athletes, like Guido, arrived in Hungary after long stretches away from competitive racing and were expected to be rusty out of the gates.

So far, though, London’s stars have delivered the goods, led by Guido, Kira Toussaint, Marie Wattel, Alia Atkinson, Maria Kameneva and Christian Diener. The superlatives came fast and furious after the Roar’s dominant performance in Match 2, with Woodhouse describing Diener and Guido as “brilliant,” Kameneva as “awesome” and Wattel as “tremendous.”

“Athletes just stood up when they needed to,” Woodhouse said.

Rio 2016 Olympic gold medalist Adam Peaty is another ace up the Roar’s sleeve, and Woodhouse believes there is much more to come from the eight-time world champion who came to Budapest after almost half a year out of competition.

“I would expect [Peaty] would be peaking towards the middle to end of November,” Woodhouse said … just in time for playoffs of the current ISL season.

Ominous words indeed for London’s opponents as they head into the stretch.