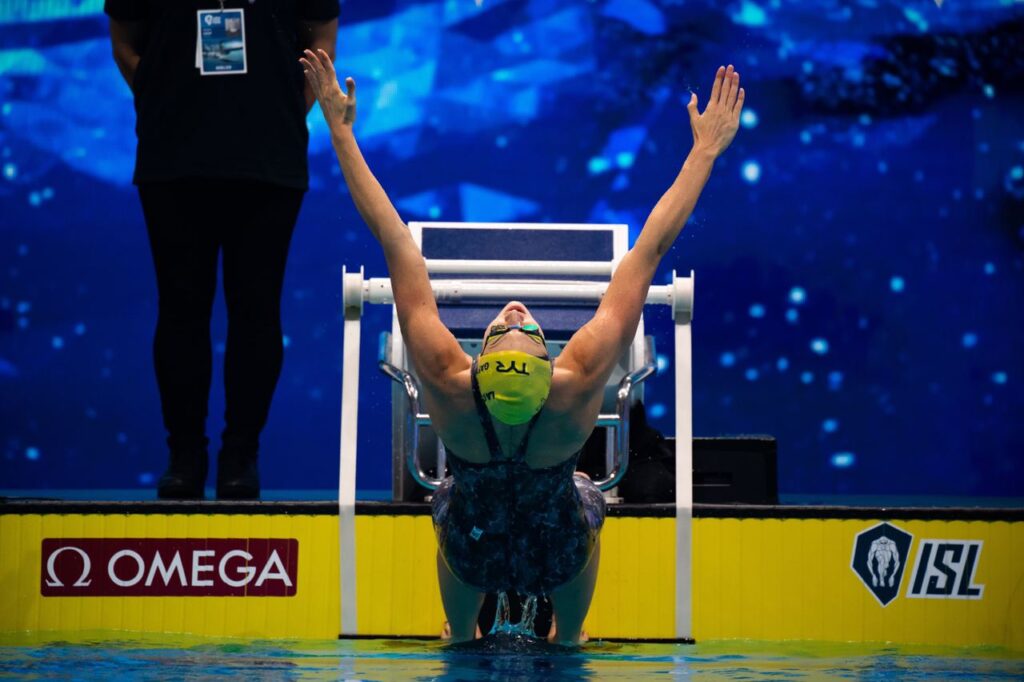 Beryl Gastaldello is used to overcoming challenges in her career, and her success in doing so is allowing her to swim at her best during Season 2020 of the International Swimming League (ISL).

The French sprinter is part of the LA Current team, who along with the other nine ISL teams are staying in the Budapest bubble for the five weeks of action taking place at the Duna Arena.

Gastaldello won the 50m butterfly in Match 1, and then found another gear altogether in Match 3 when she won five individual races and two relay races.

Such form has not come easily though, with Gastaldello having to work hard away from the pool to be both physically and mentally fit for the ISL season.

“All the mental work I’ve been doing is paying off right now,” she said. “I have been working hard with my mental trainer and we are having a lot of fun.

“I have changed my diet. I realized I had some diaphragm problems which were related to my mental health problems. It is mainly the mindset. I am here to do the best with what I have and that is what I do. I get the job done for the team.

“I have been working hard and have been through a lot, but the more trials I go through, the stronger I become.”

It has not always been this good for the 25-year-old. In 2017 she took five months off the sport after suffering from anxiety and depression.

Work with a psychiatrist and a psychologist helped her recover, but the issue means she is conscious of keeping an eye out for her teammates, especially while living together for over a month in Budapest.

“That is all in the past, thankfully,” she said. “We have everything we need [inside the bubble]. That is why I proposed some activities to check on people and check that everything is good.

“With my past experience, I can feel if something is not right, looking at people and their behavior, attitude, and body posture. If I see something that is not right, I will do something about it.

“I’m enjoying the ISL bubble because I get to see a lot of people all day long. We are having a great time together … The island we are on is pretty big and there is even a zoo to go to.”

Despite her Olympic lineage, Beryl says her family did not push her towards swimming. In fact, she initially showed great promise in athletics and gymnastics.

But her swimming talent began to shine through in her early teens, and at 14 she moved from her home near Marseille to Nice, where she could combine swimming with her schooling.

At 18, and with minimal English, she began competing and studying at Texas A&M University, winning the Southeastern Conference Female Freshman of the Year award in 2015. She continues to live and train there to this day.

“[My parents] knew what it takes to get to the highest level,” she said. “I had to leave home when I was 14 to live in Nice so that I could study and swim at the same time.

“I believe I was able to do that because they know what it takes and wanted to put me in the best environment possible.

“It was the same going overseas to the US when I was 18. It was a big shock to the system. I did not realize what I was doing. I had not visited before, and I did not know anything about the team.

“Everything is so much bigger, especially in Texas. I did not speak more than high-school English and could not speak for almost two weeks, especially going to class. It was an amazing experience, but it took a lot out of me health-wise.”

After the Current finished third in Match 1, Gastaldello’s heroics helped lead the team to a win in Match 3, leaving them in joint second in the standings behind fellow US outfit Cali Condors. LA is next in action in Match 5 on Friday and Saturday.

Gastaldello says the ace up the Current’s sleeve is the experience the coaching staff brings to the team. Head coach David Marsh led the US women’s team at Rio 2016, while General Manager Lenny Krayzelburg is a four-time Olympic champion.

“Lenny is an amazing person. He is very calm. He knows a lot as he has been there for a long time at the highest level. He is a calm spirit, but a very wise person,” Gastaldello said. “He is a role model for many of us, so it is amazing to have him on our team. He has a good energy, and we all love having him around.

“We have a lot of new people who haven’t been in the ISL before, so it is quite diverse, but I do feel that we have bonded really well.”