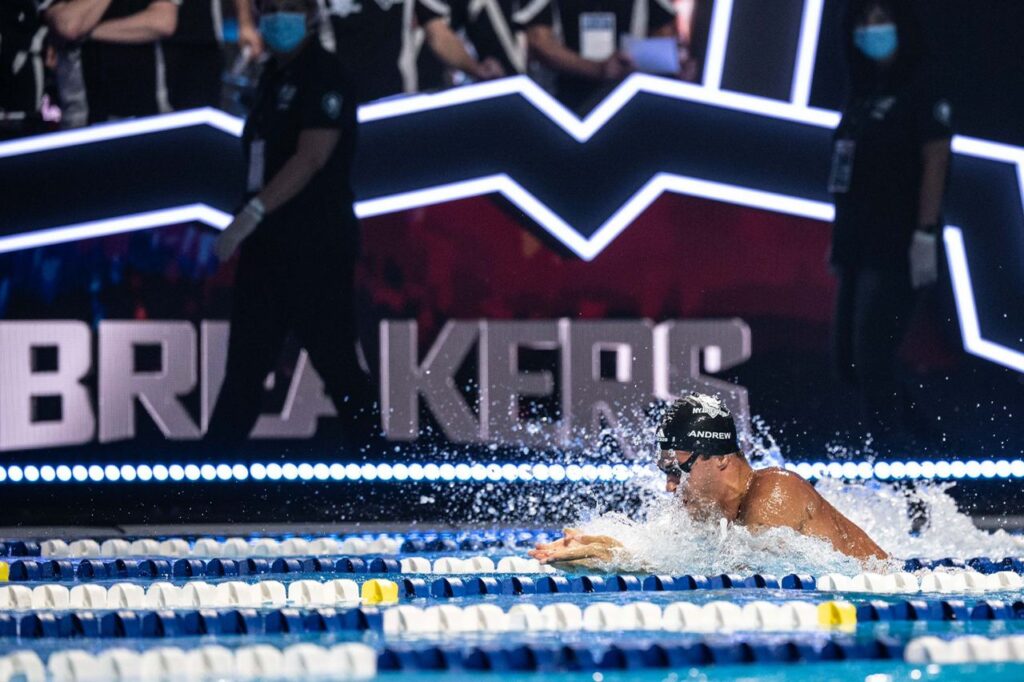 Michael Andrew may only be 21 years old, but he already has seven years of professional swimming experience and he remains as enthusiastic about the sport as ever.

The NY Breakers captain is at the Duna Arena in Budapest for the International Swimming League (ISL) Season 2020. It is the latest stop in a professional swimming career that began when he was 14 and linked up with a local company who backed his potential by becoming his sponsor.

Turning professional so young (he was the youngest pro swimmer ever in the United States) meant that Andrew was unable to compete at the high school or university level, and while he paved a unique path, it is one that an increasing number of swimmers are now starting to pursue as well.

“I have never regretted it,” Andrew said. “I have a lot of friends that went the college route, and it looks amazing, but this is my path, and I am really glad I took it.

“I’ve no regrets with going pro whatsoever. It feels like yesterday that I went pro. I think what is keeping it fresh is all the developments in the sport, like ISL. It makes being pro feel so different. It is starting to feel more legitimate because the opportunities are increased.

“I think there are a lot of athletes making their debuts as pro swimmers here and I think they can sense the change and difference from what their peers had to go through. I still feel like a young pro but look back over the stories and trips over the years and realize that we have lived a very long professional career in these seven years.”

At the heart of Andrew’s career are his parents, Tina and Peter, both of whom are with him in Budapest. Tina is the team manager, while Peter is among the Breakers’ coaching staff.

Peter is also his son’s coach and the pair use their own coaching method called Ultra-Short Race-Pace Training (USRPT) that involves dividing the length and time of one lap into smaller units of training, all at race pace.

With so many years working together behind them, all three are relaxed about linking up for the NY Breakers in the ISL.

“Having mom as team manager and dad as coach doesn’t change the team dynamic, I think it strengthens it,” Andrew said.

“Having myself and parents as part of the team it is interesting to see how that has cultivated that family feeling and I think a lot of the other athletes have seen that, too.

“We don’t look to these rolls or these titles that have been placed on us. We are more like individuals that are working together to do our best.”

Andrew has packed a lot into his career so far and he can look forward to packing in a lot more soon, starting with helping the Breakers avoid finishing bottom of the standings for a second consecutive year.

The Breakers finished fourth in Match 1, but there are another three matches before the semifinals for them to build up their points total to be among the eight teams that progress.

Marco Koch claimed the NY Breakers sole victory when he came home first in the men’s 200m breaststroke and he later finished second in the 100m breaststroke.

Andrew swam in five races, his best result coming when he finished fourth in the 50m breaststroke and 100m individual medley, but just having the chance to compete again was the overriding emotion.

“I haven’t raced since March, I know a lot of our other athletes haven’t raced since January, so it was pretty amazing to suit up and step on the blocks,” Andrew said. “It has been a long time coming, especially because most of us didn’t think this would happen.

“The first race was a tough one. We had to face three of the toughest teams in the league and that was a big task to overcome. We understood that it was best for us to focus on our own races and do the best that we can.

“We had some good swims and some swims that need improvement.

Now we are racing again we learn so much from this opportunity and we will see a lot of improvements over the next few weeks.”