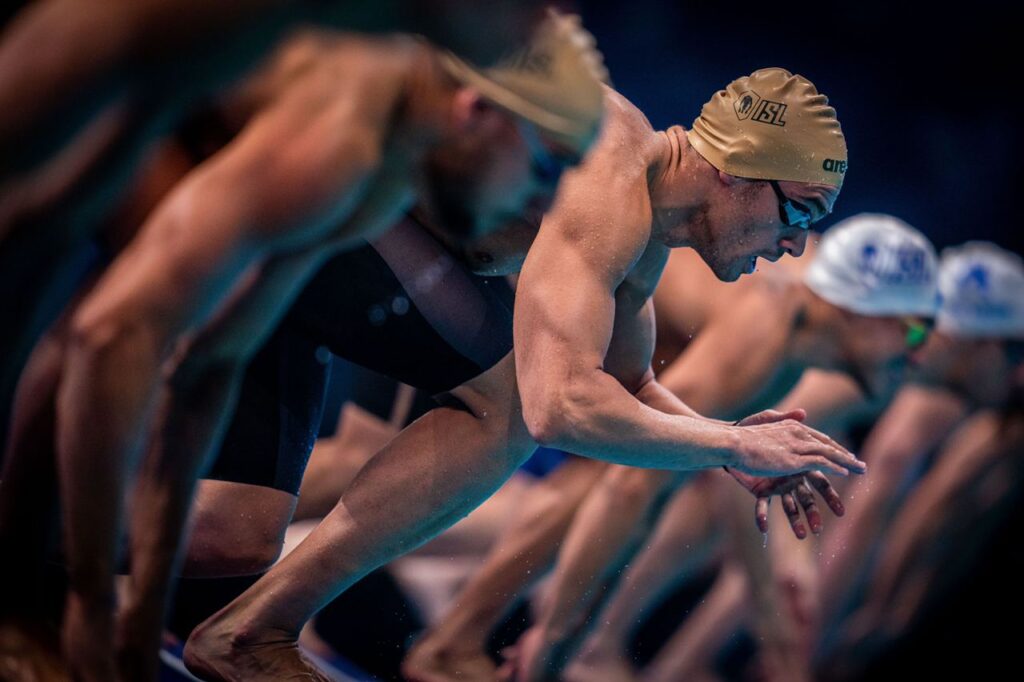 London Roar general manager Rob Woodhouse can afford to pause for a moment and reflect on a dominant performance in Match 2 – but he knows the team must step up again to beat the big guns of the International Swimming League (ISL) in Season 2020.

The aim was to be ruthless and the Roar achieved this in some style.

They were triumphant over Team Iron, DC Trident and Aqua Centurions, landing a huge haul of 609.5 points to lead the ISL team standings after two matches. Cali Condors and Energy Standard complete the top three places following their performances in Match 1.

“It wasn’t about easing off with the win. Every event was about doing the best they could do,” Woodhouse says. “We were trying different combinations. Most of them worked, some didn’t but that was all part of this first match.

“The way our schedule is, each match gets harder and harder in terms of the competition. They are all tough, but we know they are going to get tougher.

“It was great to rack up so many points but we’ll see that change over time with different opposition. Probably for all the athletes the most important thing was to have a really good hard hit out.
“We saw that some came in really ready to race and others were maybe a bit rusty but they will get better over the five weeks of the season,” he says, reserving particular praise for the Roar’s younger athletes who “stepped up.”

Fantastic start – and there’s more in the tank

“Christian was brilliant and the way he and Guido combined for that skins… strategically that was terrific,” he says, adding further superlatives on London’s female pool powerhouses.

Kameneva’s win in the skins final after winning the 100m individual medley was “awesome,” while Wattel was “tremendous.”
“Athletes just stood up when they needed to. Wattel is a great example. She won the 200m freestyle. We took her out of the 50m butterfly because we were short with no Freya [Anderson] or Holly [Hibbott] and put her into an event that’s not her strength – but she won,” he says.

Rio 2016 Olympic gold medalist Adam Peaty edged to victory in the men’s 100m breaststroke, tweeting afterwards: “First @iswimleague match done. Huge victory for @ISL_LondonRoar. Set the foundations to start off a great season. Now back to work for 10 days.”
And Woodhouse believes there is much more to come from the eight-time world champion who is returning to form after some six months without competitive racing: “I would expect he would be peaking towards the middle to end of November.”

The Roar’s general manager admits there is room for improvement across the team as 10 days of training get underway in the ISL athletes bubble on Margaret Island in Budapest. DC Trident, LA Current and Tokyo Frog Kings are the competition in the next match on Oct. 30-31.
“A few events we finished towards the back of the field but we were also four people down,” he says. Freya Anderson, James Guy, Holly Hibbott and Tom Dean flew into the Hungarian capital on Monday to join the team after being forced to quarantine in the UK following contact with someone who tested positive for coronavirus.

“That’s going to help us, we will get stronger. They will be swimming in the next match. That gives us not only greater depth but allows our multi-event swimmers to be more rested for their main events,” Woodhouse explains. “That’s where there will be some improvement as well.”

Roar set sights on title
After coming second behind Energy Standard in the inaugural ISL season, London Roar have already shown they are contenders for the title. “I think so. If we can get the mix right, we are certainly going to be right amongst it,” says Woodhouse.

The Roar’s head coach Mel Marshall and her team will spend time over the next few days analyzing the team’s strengths and weaknesses and plotting how they can select the best team to neutralize the threat of their next opponents.

Woodhouse is delighted with the mood in the Roar camp: “The team has bonded so quickly; they have been absolutely fabulous. As they were last year, we have a great culture within the team and that’s led by our coaches, and we have two great captains with Sydney Pickrem and Adam Peaty leading the way.”

He says the team will “train pretty hard but we’ll look to have a bit of fun and mix it up a little, let the athletes be themselves a bit on Margaret Island and try and relax.

“It’s a long period to go so we have got to take our mind off the racing for a little while. And then when we get back into it, assuming we go through the semis and final, we have got five matches in 24 days so it’s going to be pretty intense.”
Woodhouse expects Cali Condors, Energy Standard and LA Current to do well in the coming weeks. Newcomers to the league, the Tokyo Frog Kings and Toronto Titans, may also pull off a few shocks, he claims.
“I’m really excited to see the Tokyo team compete this weekend. They have got some big names there. They are swimming fast and are certainly going to be right up there.”

Woodhouse is impressed with the ISL’s organization of Season 2020, which has included some format tweaks and features a bigger TV production than last year. This year’s biggest international sporting event is being broadcast to more than 140 countries and territories.
“It is good for the sport of swimming … just the swimmers having the opportunity to be here. Seeing the attitude of the athletes towards this and their gratitude for this opportunity in these times is just fantastic,” he says.
The ISL’s revamped scoring format includes the opportunity for the winners of the medley relays to choose the stroke for the skins races, the dramatic finale to each match.

Swimmers compete in back-to-back 50m races on a knockout basis with two swimmers contesting a final. There are lots of points up for grabs from the heats and final, with the new jackpot time rule also coming into play to beef up team scores.
The Roar took full advantage yesterday. They chose backstroke and ended up securing 58 points after victories in both the men’s and women’s skin races.

Woodhouse says it’s all about strategy – and believes the skins races will be crucially important in the closing stages of Season 2020.
“We backed our athletes and they came up trumps, so it worked out really well,” he says. “With skins, there is very little margin for error so decisions can easily backfire. But you just have to back the people you feel will deliver and fortunately for us they did yesterday.”

“There is no doubt it will decide who wins the title, because of points being stolen. And skins [jackpot time rule] in particular can make a massive difference. It will almost certainly mean that it comes down to the wire. We will see some big margins but once we get to semis and final it could make it even more exciting.”