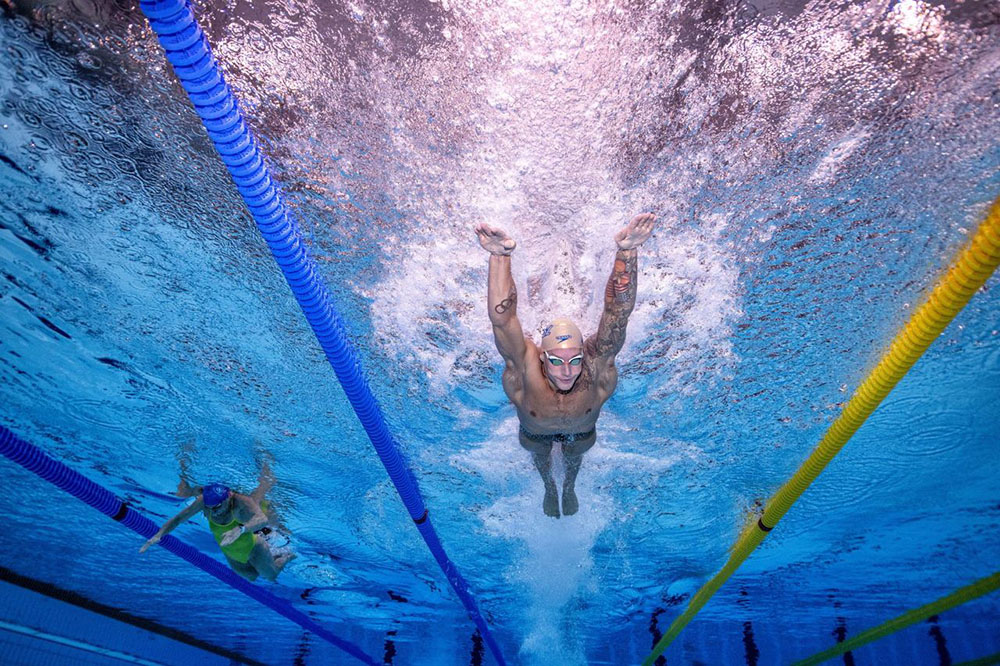 With fewer than 24 hours to go until the start of Season 2020 of the International Swimming League (ISL), Cali Condors’ star Caeleb Dressel says he only has one goal in mind: to redress his team’s third-place finish from last year.

And that means tactics over speed as more than 300 of the world’s best swimmers gather at the Duna Arena in Budapest, Hungary to compete in the biggest international sports event of the year.

“We want to do the best we can each race. That is the most important thing to worry about while we are here,” Dressel said at the opening press conference today. “It is about racing. It is not about times. It is about getting your hand on the wall first. That is what we want to do.”

The San Francisco-based Condors are aiming to improve on their 2019 ISL performance, when they finished behind inaugural champions Energy Standard and London Roar.

“We are looking forward to the next five weeks. It is a lot of back-to-back racing, but that is what we want. I think we will step up and think we will be in a good spot.”

Cali Condors will be competing against Energy Standard, NY Breakers and LA Current in Match 1 this Friday and Saturday.

The four other returning teams – London Roar, DC Trident, Aqua Centurions, and Iron – will clash in Match 2 that takes place on November 18 and 19. Toronto Titans and Tokyo Frog Kings will make their ISL debuts in Match 3.

In total the ISL Season 2020 will feature five weeks of world-class competition between over 300 swimmers from over 50 countries. There will be 10 matches, with the top eight teams progressing to two semifinals of four teams, with the top two moving on to compete for the title in the final that takes place on November 21 and 22.

Energy Standard, who took the 2019 title back home to Paris following victory at the Mandalay Bay Hotel in Las Vegas in December, are again led by Sarah Sjostrom.

The Swedish sensation was in scintillating form in 2019 and claimed the MVP title having won nine races throughout the season.

She is joined by fellow Olympic champions Chad Le Clos and Florent Manaudou in the Energy Standard team, a world-class pair who contributed a combined 10 victories to Energy Standard’s eventual triumph and who will ensure that General Manager and Head Coach James Gibson’s team will be doing all they can to retain their title.

“We train together a lot in our team, we have a good team environment, and we push ourselves in training to become even better,” Sjostrom said.

“It is amazing to sit here next to the pool and it is happening now, so we are really excited to get started.”

Aside from the competition, ISL Founder and Chairman Konstantin Grigorishin is confident that ISL and FINA can work together in the future, and said that ISL Season 2020 match performances will count for athletes towards qualification for the Abu Dhabi 2021 (25m) World Championships.

“We are not in competition with FINA,” Grigorishin said. “I think we are on the same page. We should not split the swimming community.

“Today we had a very good confirmation that we are on the right way because they will accept the ISL results. We need to know how to work together and know how to be split and I think we are ready to move in that direction.”

The two other teams competing in Match 1 will both want to start strongly after they missed out on the top three places in 2019.

LA Current finished fourth, while NY Breakers ended up propping up the table in eighth place.

Ryan Murphy will be one of LA Current’s leading figures and he showed his pedigree in 2019 when he won the 200m backstroke in the ISL final.

Having spent the last months second training, the 25-year-old is ready to start seeing if he can go even faster.

“I am looking forward to stepping up on Friday night and going really fast and then coming back on Saturday and going fast again. We have a really solid core group at LA Current and there is a lot of really good people to train with and I am looking for to mixing it up with those people.”

The NY Breakers struggled in 2019 and finished fourth in all three of their matches.

However, Michael Andrew does have reason to look back with happiness on being back in Budapest because while competing there in Match 4 last year he finished first in the 50m breaststroke.

He is aware that the Breakers cannot afford to start slowly but realizes that the team will be expected to improve as the season goes on.

“I think what we will see, especially after our first competition, is we will learn a lot,” Andrew said. “I prefer racing because you learn from every race.

Like Andrew, Dressel knows that previous success at a venue is no guarantee of a repeat performance, even though winning seven gold medals at the Swimming World Championships at Duna Arena just three years ago is hardly inauspicious.

The Florida native will be a threat in freestyle, breaststroke and butterfly and he is counting down the hours till he can begin racing again and mixing with the other shining stars of the ISL.

“I have been craving competition and racing,” he said. “It hit me really, really bad in late August, early September right when I was supposed to be done with the big meets this year.

“I see ISL as a huge benefit to my swimming career as a whole, and not just something I have to go to because I am on the Condors or a swimmer. I want to do this. I want to be here. And I need to do this to make me better.

“Budapest has a special place in my heart. I felt like a kid when I was here in 2017. The people were great to me and the competition and the crowd, everything about Budapest was a very special moment so it is great to be back here.”

Swimming fans will be able to keep up with all the action from Season 2020 of the ISL as it will broadcast to more than 140 countries and territories around the world.