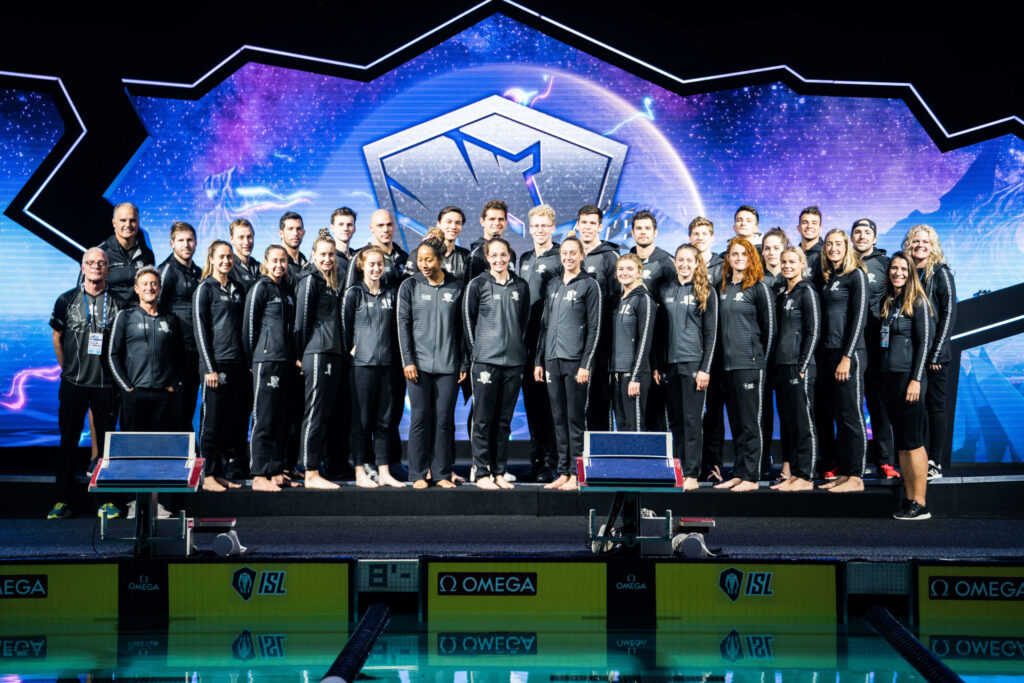 Due to both circumstance and philosophy, Tina Andrew had a specific approach that she immediately utilized upon being named general manager of the NY Breakers.

With many of the top American swimmers having connections to the other US-based clubs, Andrew targeted an underdog approach when signing athletes to the team.

“We knew most of the top swimmers in the US already had ties to the Cali Condors and LA Current with deep college and coach connections that would be difficult to persuade to join us,” said Andrew. “We decided to follow the ‘moneyball’ approach and target the athletes that were fairly unknown but ready to pop.

“I targeted going after the underdogs in our sport. Hungry and frustrated athletes that wanted to be part of a family. Frustrated because they were overlooked or were not good enough yet but definitely had more potential that for different reasons have not been realized yet.”

Ultimately the goal when bringing these type of athletes into the fold was to develop a family-type atmosphere.

“As far as the type of team we set out to build and effectively started building from the get-go was family,” she said. “In our short journey in the sport it has become evident to us that swimming is a lonely sport and we wanted every athlete and staff member know they are valued for who they are and not just what they do, implement and promote effective strategies to build relationships and community.

“I believe this strategy will take time, but it is a winning strategy because one individual can be very good, but in a healthy family, everyone can be exceptionally great and when everyone is free to perform better than their known and perceived best, we will win.”

Over the course of the season, the Breakers saw a slow progression. After back-to-back distant fourth-place finishes in their first two matches, they produced a season-best performance at the US-Derby in College Park, breaking the 300-point barrier for the first time while challenging the DC Trident for third place (ultimately finishing fourth).

“I’ve seen a group of individuals become a team,” said Andrew on the season-long progression. “Our team was the most diverse and definitely the most international of the US teams. Very few of the athletes actually knew each other or each other’s strengths. I believe this was a factor in the team’s initial belief in themselves on what they could accomplish. As they got to know each other, cheering each other on and believing in their teammates, we became stronger and stronger.  The US-Derby was a testament to that with a fierce back and forth battle for third with the Trident.”

One of the club’s top performers throughout the inaugural season was American breaststroker Breeja Larson, who proved to be extremely valuable to the Breakers both in and out of the pool.

“She was amazing,” said Andrew of Larson. “I have known and watched her grow now for several years and from many conversations with her during lead-up, I knew she was in a very healthy space where she was set to thrive in the pool. She was so excited to be part of the NY Breakers and ISL, and I also believe what I call the ‘ISL Effect’ helped reenergized athletes like Breeja, being given the opportunity to earn a decent living doing what they love.

“Breeja’s personality and leadership was a breath of fresh air on the team. Her vast experiences, her loving caring nature, competitive spirit, ability to motivate the team and to help sort out scuttlebutts among the athletes made her a great captain for NY Breakers.”

Larson, a 2012 Olympic gold medalist, recognizes the significance the ISL has to the sport.

“Being able to experience being in the ISL for its first season was incredible,” she said. “We are part of a big piece of history for the sport of swimming. I’m thankful I was able to have Tina Andrew and Shantel Davis as General Manager and Team Manager to guide the NY Breakers in their first season as well.

“Being part of the Breakers has become one of my favorite swim memories of my career.”

American breaststroker Emily Escobedo, Australian freestyler Jack McCloughlin, and Canadian free and backstroker Markus Thormeyer were three other athletes Andrew recognized as somewhat flying under the radar but being very important to the team throughout the season.

“They really stepped up to the plate and were among the top scorers on our team and above all, great team players,” she said.

Moving forward, Andrew says that she’ll try to emulate the strategies of the league’s top-two clubs, Energy Standard and the London Roar, as she continues to build her franchise.

“I believe so strongly now, even more than before the start of our season, that we need to offer NY Breakers a home like Energy Standard have in Turkey,” she said. “This type of environment will first and foremost give you ultimate knowledge and insight on where each athlete is and better manage whether they are in a position to compete at their best and not dog-tired from most of the high yardage, Olympic-focused programs most of them come out of.

“London Roar did a great job communicating to their coaches or getting their coaches to agree to have athletes shaved and tapered for their first event,” she added. “That is the type of respect and attitude I would have liked to see from all our athletes, and in fact, all athletes who participated in ISL.”

In the future, developing the type of training base similar to what Energy Standard have is the ultimate goal.

“Having a NY Breaker ISL Center of Excellence or an Academy will also allow us to properly develop our team, build relationships and camaraderie among team members, while athletes also builds faith in their teammate’s capabilities living and training with each other daily,” she said.

In a season full of lessons and experiences, Andrew took a step back to fully acknowledge what the league can bring to swimming long-term.

“ISL could not have asked for a better and more spectacular inaugural season,” she said. “I cannot wait to see how fast this grows as I have a feeling based on our first year that the ISL will be all we dream it can be and more.

“Buckle in and get ready for the ride of your life as a fan, athlete, coach or parent of a swimmer. Change is here to stay.”