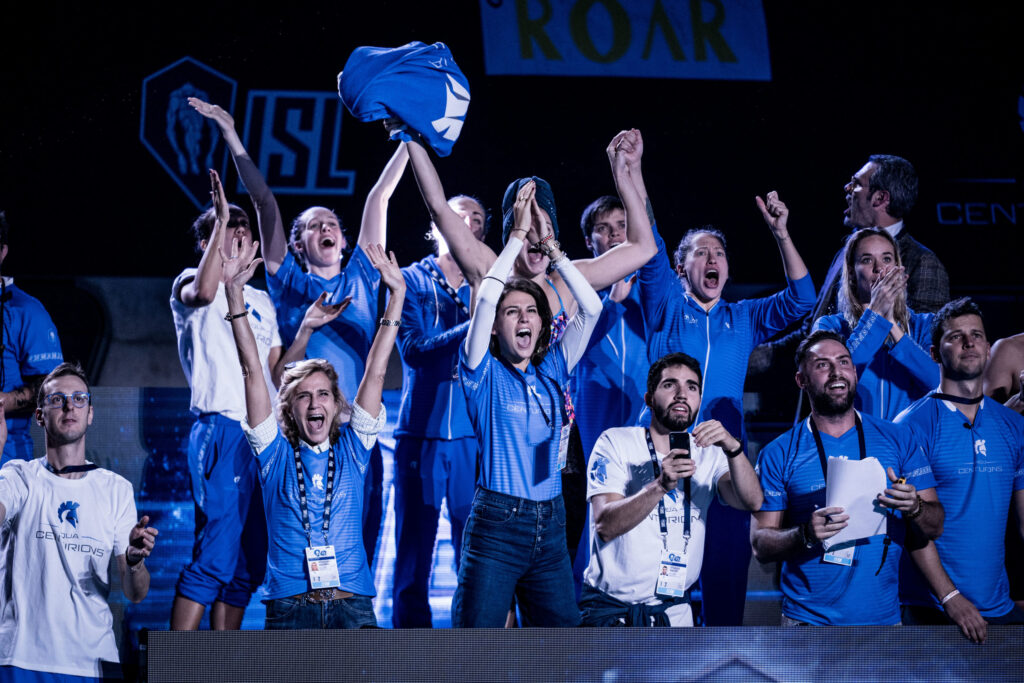 In the International Swimming League’s inaugural season, three of the four European clubs each represented a specific country on the continent — Hungarian-based Iron, the Aqua Centurions from Italy and Great Britain’s London Roar. The fourth team, Energy Standard, more accurately represented Europe as a whole, with business based in France, training based in Turkey, and athletes from all over the continent.

And while all three of those clubs featured many swimmers from their home countries, no club had that nation’s culture built into the roster quite like the Centurions.

Club general manager Alessandra Guerra felt bringing the Italian culture into the fabric of the team was important.

“Of course, the team that was created was a team with a predominant ‘Made in Italy’ spirit,” said Guerra. “Having such a large and valid pool of Italian swimmers certainly helped us get started and strengthen our identity as a club.

“With our Italian characteristics, our cheerfulness and inclusive spirit, culture and hospitality, we have tried to fascinate our foreign athletes who at the end of the season have become more Italian than us!,”.

As the last of the eight clubs to come together, Guerra was working at a deficit from the get-go with the Centurions, but by signing the majority of professional Italian swimmers, along with some foreign talent, the roster formed nicely.

“We had a strong pool of Italian athletes, but we had some challenges in finding foreign swimmers who were still available,” she said. “In Brazil and in Germany we found some very good swimmers that proved essential to the team.”

“Indianapolis was the first-ever ISL event and the Aqua Centurions suffered the stress and emotions of the new format,” said Guerra. “Most of our athletes normally start to prepare seriously for the season in mid-September, so their performances were not the best and the ‘locker room’ spirit of the group was only at the beginning.”

The following weekend the Centurions headed home to Naples, Italy, to race in front of their home fans. Inside of the raucous Felice Scandone pool, the club saw an improvement in their performance, finishing just half a point behind the Trident.

“The fact of competing in Naples gave us a great boost,” she said. “The support of the fans was thrilling, and the team was really coming together.”

After encouraging progression from the first match to the second, Guerra went out and signed a few new athletes to bolster the club for the European-Derby in London.

She added Russian Vladislav Grinev, Italian Arianna Castiglioni, and Freya Anderson of Great Britain. Bringing in Grinev and Anderson — both sprint freestylers — was a strategic move as Guerra had identified that as a weakness the club had early on in the season.

“Bringing in Vlad and Freya was a move exactly in this direction: to try to fill the gap in the skins and in sprint races in general,” she said. “Both of them were spectacular in London and really bonded with the rest of the team even though they were the last ones to join us. They showed their qualities both as swimmers and as people.

Grinev and Anderson both performed exceptionally in London, finishing as the club’s first and third-highest point-scorers respectively.

“In London the team was tight, a true team spirit had emerged. Unfortunately, despite our improved performance in London, it was too late.”

The club put up a good fight with Iron for third — behind juggernauts Energy Standard and London Roar — but ultimately placed fourth once again. However, they did increase their point total for the second consecutive match.

“What is certain is that the club evolved and got better and better as the season went on,” she said.

Looking back, Guerra highlights the club’s breaststroke prowess, along with a few of their foreign athletes, as some of the biggest positives from the season.

“Our fully Italian breastroker team proved hard to beat and highly competitive — Martina Carraro, Castiglioni, Fabio Scozzoli and Nicolò Martinenghi,” she said. “But also Breno Correia from Brazil was so consistent throughout the season and always brought home points for the team.

“Our German contingent also proved to have a pivotal role, being so tenacious and committed — Poul Zellmann, Philip Heintz. (Heintz) felt sick during one event and in order not to have minus points he kept swimming — if this is not team spirit I don’t know what is. Also Franziska Hentke and Sarah Kohler.”

Scozzoli, a force in all three matches across the men’s breaststroke events, echoed Guerra’s feelings of how well the team meshed together.

“I really believe that the first season was a success,” said the 2012 Short Course World Champion. “I think that all the athletes showed an incredible enthusiasm. Regarding the team, we really lived it in a positive way from all points of view. The results were the consequence of the incredible spirit and energy generated by the team itself.”

Moving into next season, Guerra’s main focus will be improving the club’s ability in the sprints and skins, where so many points are awarded.

“What really penalized us throughout the season was the points scheme for the skins races which have proved essential,” she said. “We would have probably improved our overall performance during the season if we could have made a few more points in those races.

“We were aware that the team was 100 percent committed and ready to fire. I can say with some presumption that with a couple more competitive sprinters we would have had a different position in the rankings. We know our potential and we are committed to do better next time as we believe we can be more competitive than what we showed the first season.”

And for Scozzoli, he’s simply looking forward to what the league can offer the sport as we head into next season and beyond.

“I really look forward to the future and I will give my all for the team,” said the co-captain. “ISL has brought in fresh air and renewed interest from the athletes’ perspective. ISL created passion and enthusiasm in our sport and I hope this is translating to the public who will keep following us more and more as we move forward.”