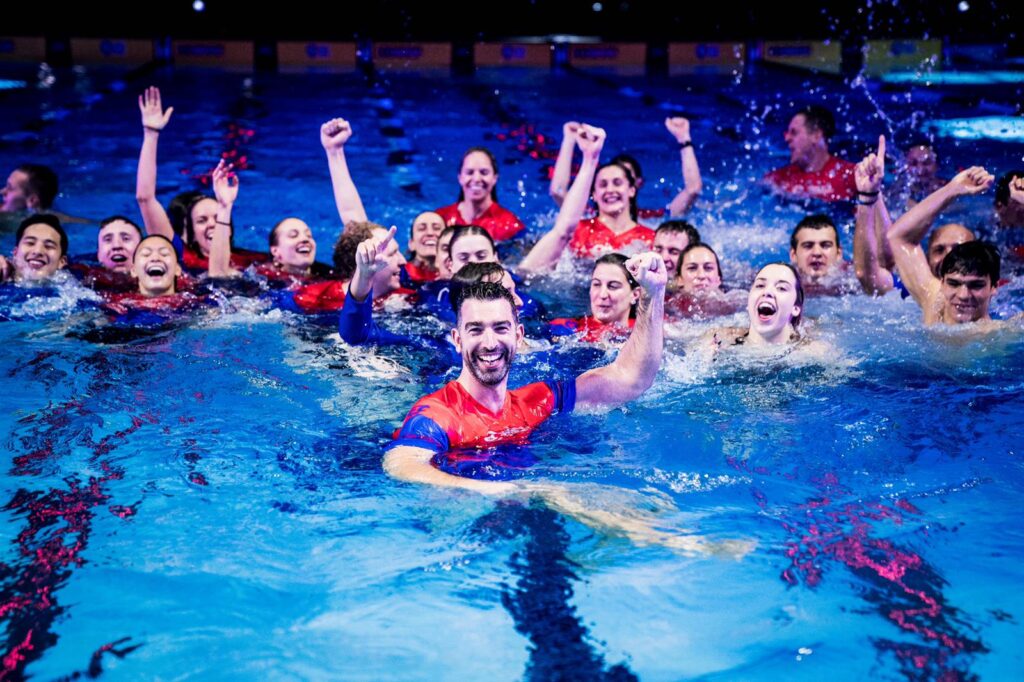 In a finale of epic proportions, the International Swimming League’s inaugural title came down to the match-ending skins as Energy Standard pulled off an improbable comeback victory over the London Roar to become the first-ever ISL champions.

Leading by 13.5 points coming into Day 2, Energy Standard relinquished the lead early on as the Roar had a hot start, gaining 45.5 points in the opening session. London would maintain that lead the rest of the way until the skins, where a win from Sarah Sjostrom in the women’s event and a runner-up finish from Florent Manaudou in the men’s sealed Energy Standard’s victory.

“I was on edge there, it’s fantastic,” said Energy Standard head coach James Gibson moments after the match ended. Gibson’s club finishes the season undefeated, but in three of those four matches they trailed coming into the skins.

“They’ve always been behind, for three meets, but they never give up. They showed great courage, the last guys coming out.”

In addition to their skins performance, the winning club had a big showing on Day 2 from Japanese superstar Daiya Seto, who won both the men’s 200 butterfly and the 200 individual medley. They also had a crucial win in the match’s final relay, the mixed 4×100 freestyle, which gave them momentum leading into the skins.

Sjostrom, who also had two second-place finishes on the day in the women’s 100 free and 50 fly, earned herself $50K by winning ISL Season MVP, solidifying that with her skins victory. The Swede scored a total of 243.5 points during the season, edging out Cali Condors’ Caeleb Dressel by just 3.5.

“It means so much, I’m so proud of the team,” said Sjostrom. “It’s amazing to win the first ISL title. I’m very, very happy, first of all to win the title with my team, but also to win the MVP title, it feels amazing.”

For the Roar, they had five victories on the day which put them in the driver’s seat until late in the match. They had big wins early from Emma McKeon in the women’s 200 free, Adam Peaty in the men’s 100 breast and James Guy in the men’s 400 free, and then Minna Atherton (women’s 100 back) and Sydney Pickrem (women’s 200 IM) added two more down the stretch.

Ultimately, London failing to advance any men out of the first round of the skins was the reason Energy Standard managed to pass them in the final moments.

“I couldn’t be more proud of the guys,” said London Roar head coach Mel Marshall. “They absolutely swam their hearts out the whole two days, and what a great event. You’ve got to have someone that wins and someone that loses, and tonight we came second. It’s just sport, that’s just how it is.”

The Cali Condors performed exceptionally once again to take third, led by Dressel who wins his third match MVP of the season with 121 points, earning a $10,000 bonus. The points in the final counted double what they were during the regular season, hence his massive total.

After two wins and one world record on Friday, the 23-year-old came out on top in three races tonight, claiming the men’s 100 free, 50 fly and the skins. His swims in the 100 free and 50 fly were new American Records, and he finishes the season having gone undefeated in all three of those events as well.

“I would’ve rather had the team title,” said Dressel. “I’m really proud of this team.”

Also shining for the Condors was Lilly King, who finishes off her season with a perfect 12-for-12 record in the women’s breaststroke events, winning the 100 in a time of 1:03.71. They also had wins from Ariarne Titmus in the women’s 400 free, Hali Flickinger in the women’s 200 fly and the women’s 4×100 medley relay.

The LA Current lost ground early on Day 2 and found themselves out of the race for the match victory, but still had some strong swims from Béryl Gastaldello in the women’s 50 fly and Guilherme Guido in the men’s 50 back. Both swimmers finish the season having won those respective events four times.