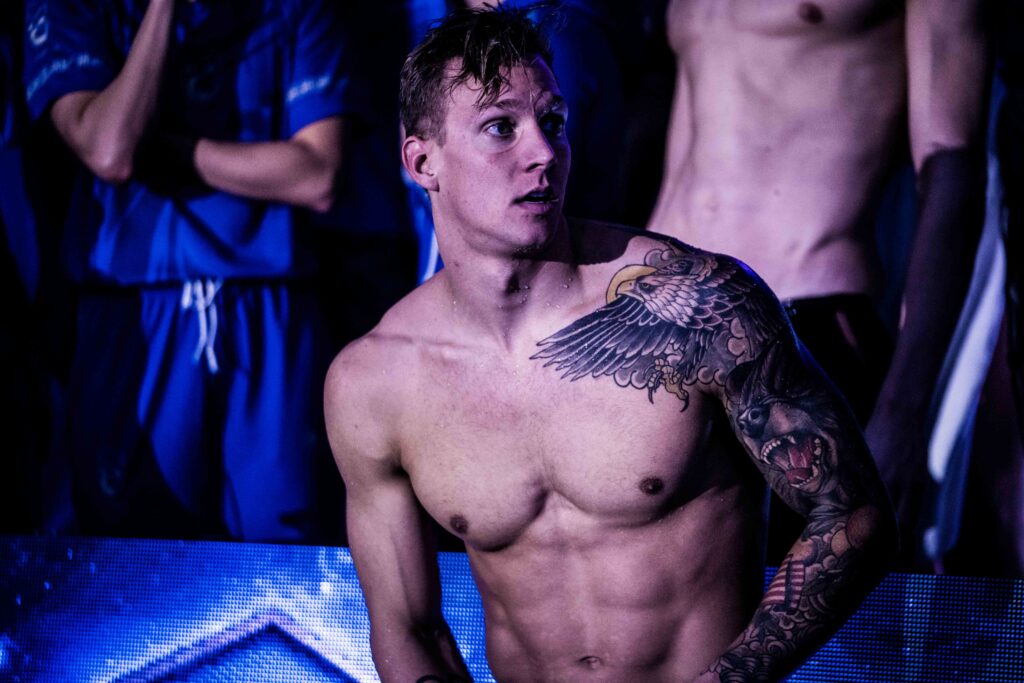 The International Swimming League’s Grand Final in Las Vegas delivered on Day 1 as the Mandalay Bay crowd saw some incredibly fast swimming across the board, including two new world records, along with a very close race in the overall standings.

Check out some key storylines to keep an eye on as we head into Day 2:

The 23-year-old Cali Condor won the men’s 100 butterfly for a second time, running down Energy Standard’s Chad Le Clos, and then claimed his third consecutive 50 freestyle victory in a new world record time of 20.24 seconds.

He sits atop the ISL Final MVP standings after Day 1 with 52 points, 11 clear of the next-highest swimmer. With Dressel sure to be a major factor in tomorrow’s skins event, the three-round 50 free eliminator worth triple points, he is almost a guarantee to win his third-straight MVP, awarded to the swimmer who scores the most points in each match.

In addition to match MVP, Dressel has swum his way into contention for ISL Season MVP, awarded to the swimmer who scores the most points for the entire season. Energy Standard’s Sarah Sjostrom held a sizeable lead coming in, but Dressel has bridged the gap and now only trails by 17.5 points.

With $50K on the line for the winner, this award could very well come down to the match-ending skins as well.

The club had an unbelievably hot start, winning the first five races of the match, and then Dressel’s world record really gave them an extra boost to finish the session strong. Also winning two events for the Condors was Lilly King and Nic Fink, who both took the women’s and men’s 50 and 200 breaststroke respectively. King has now won all 11 female breaststroke races she’s raced in this season.

While Dressel and King’s swims were predictable, Fink’s weren’t. And if the Condors can continue to have a few surprises on Day 2, they can challenge for the match victory — especially with Dressel being such a favorite in the men’s skins.

The Cali Condors have defied the numbers so far and put themselves in contention to win the final.

In addition to the world record, he also won the race by five seconds. And although that was the only individual event he raced on the day, he’ll be a huge factor for Energy Standard on Day 2 with a chance to win both the 200 fly and 200 IM.

The Japanese superstar isn’t going to be the top point-scorer for the meet, but his contributions give the club a significant boost that could very well push them over the top by match’s end. In addition to the Condors, who are 13.5 points back, the London Roar are right there, and will make a hard charge at Energy Standard on Day 2.

Every point counts, and Seto is bringing in a lot of them.

It took the club until the 14th event of the day to pick up a win, and they finished with only three compared to Cali’s nine and Energy Standard’s five.

However, despite their lack of top finishes, and some of their stars being a little bit off, the Roar still find themselves down by just 17 points. This speaks to their incredible depth, and with them being much better on Day 2s throughout the season, they remain very much in the hunt.