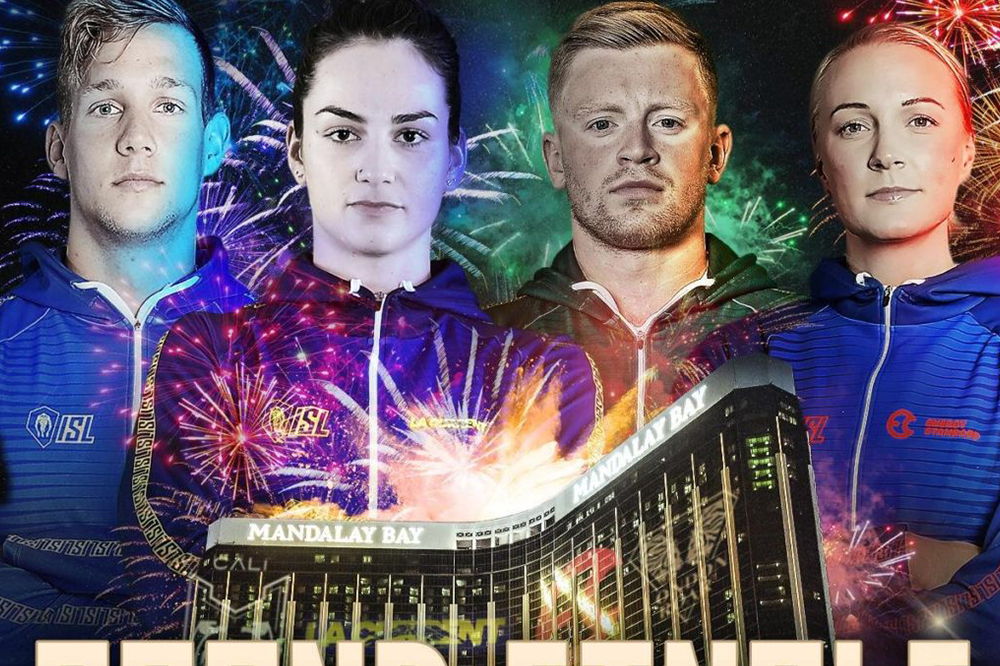 The stage has been set, and now it’s time for the International Swimming League’s first-ever champion to be crowned at the league’s Grand Final in Las Vegas.

There has been a substantial amount of prize money on the line for the athletes throughout the regular season, but the stakes will increase significantly in Vegas. The prize for the top point-scorer from the match will be doubled, as the “Las Vegas MVP” will earn $10,000 USD. Additionally, the top scorer from the entire season, the “ISL Season MVP”, will win an incredible $50,000 USD.

In total, there will be nearly $1.5 million in prize money available.

The match will feature the top-two European clubs this season — the London Roar and Energy Standard — along with the two top-two US clubs — the Cali Condors and LA Current. This will be the first meeting of the season for the Roar and the Condors, and also the first matchup that features Energy Standard and the Current.

After a very close showdown at the European Derby, Energy Standard prevailed over London to make them the only undefeated club coming into the finale. On the other end of the spectrum is Cali, who has yet to place first in a match after a pair of single-digit losses to Energy and LA in Naples and College Park.

The 2019 International Swimming League matches are broadcast on television live, delayed-live and via dedicated highlights programming in countries throughout the world. Details of regular broadcasters by country appear below. For precise details of broadcaster coverage please check local listings.

Where to watch by region

When to watch by region

Over 100 Olympians are represented in the ISL, including 41 Olympic gold medalists from the 2016 Olympic Games. The ISL is groundbreaking in the swimming community as athletes will be paid both a salary and earn prize money based on their individual and club finishes. About $180,000 in prize money has been awarded at each regular season match, with nearly $1.5 million in prize money available for December’s championship meet in Las Vegas. Men and women share equal prize money.

Experts in television, digital media and sports entertainment provide a compelling backdrop for the swimmers with cutting-edge production, live show and fan engagement.

The Las Vegas Grand Final will feature some of the best swimmers in the sport, including Caeleb Dressel, Sarah Sjostrom, Adam Peaty and Nathan Adrian.

Dressel has been the most electrifying swimmer of the inaugural ISL season, winning match MVP in both of his appearances with record-setting point totals. The 23-year-old Cali Condor is undeniably one of the biggest stars in the sport after his six gold, eight medal performance at the 2019 World Championships.

Joining Dressel on the Condors is fellow American Lilly King, who is a perfect 9-for-9 so far in the women’s breaststroke events in the ISL and will look to finish the season off undefeated.

Energy Standard’s Sjostrom has been key to keeping her club undefeated throughout the season, leading the league in points as she looks to win the $50K bonus for season MVP. The 26-year-old Swede is extremely versatile across the freestyle and butterfly events, and is the owner of six individual world records — the most of anyone in the sport.

Her teammate Chad Le Clos comes in with the hot hand after winning match MVP at the European Derby in London, and will be a threat to win all three male butterfly events.

Peaty, a member of the London Roar, is the most dominant breaststroker on the planet, having won 2016 Olympic gold in the men’s 100 breast along with three consecutive World Championship titles in the 50 and 100 breast.

Joining Peaty on this stacked London team are female backstroke dynamo Minna Atherton, the only swimmer to set a world record in the ISL, and her fellow Aussie Kyle Chalmers, who is the reigning Olympic champion in the men’s 100 free and will pose a big threat to Cali’s Dressel.