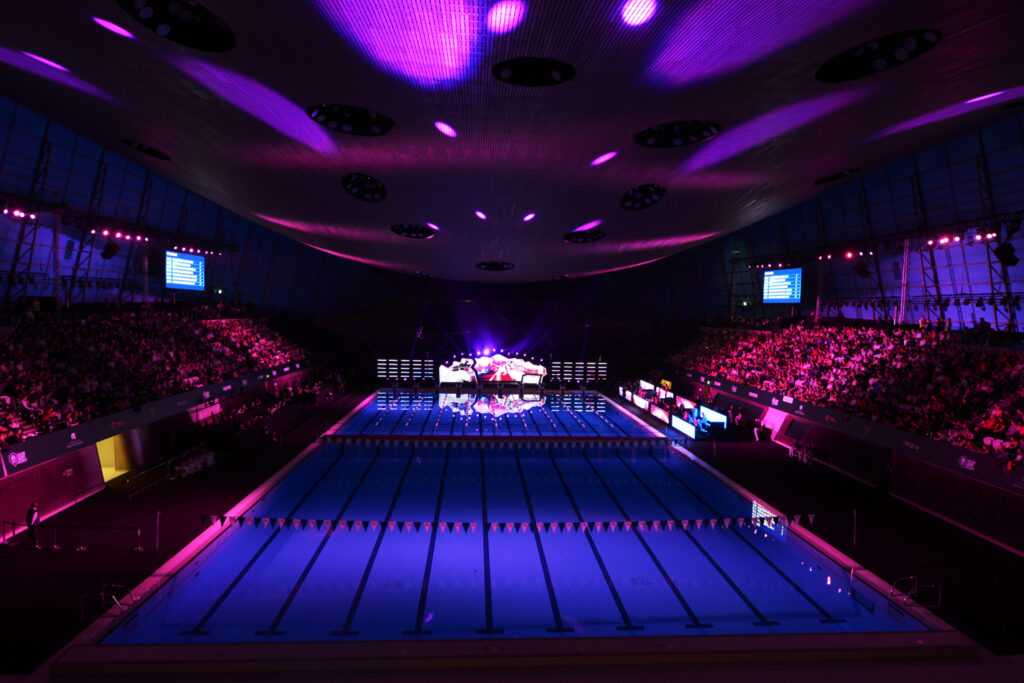 Day 1 of the International Swimming League’s European Derby match in London saw undefeated clubs Energy Standard and the hometown London Roar finally meet after a lot of anticipation. Energy Standard was leading by a wide margin throughout most of the day, but a late relay disqualification left them with just a 14-point buffer over the Roar heading into Day 2.

“I think for the team, the relays and the skins are the best ways to score a lot of points, so I’m disappointed,” said Energy Standard’s Florent Manaudou, who was a member of the men’s relay team that thought they had won before being disqualified. “But, we’re still first, and I think it’s the best end of Day 1 we’ve had, so let’s see tomorrow.”

“A little bit disappointing, but we’ve got to take the positives,” said Energy Standard head coach James Gibson. “Look, it’s frustrating. But the guy didn’t mean to do it. I’m pleased we’re in the lead, but now I guess it’s more competitive tomorrow. If we hadn’t gotten the DQ we’re sitting 40 points in front, so that makes us a lot more comfortable for tomorrow.”

“The nature of the ISL and the way it is, it’s all unpredictable. In Naples, we were 40 points behind going into the last session and we won. It would have been nice to have that buffer on London, but we haven’t.”

Manaudou, who won Olympic gold in this same pool seven years ago at the 2012 Olympics, had a strong showing on Day 1, including a victory in men’s 50 freestyle. The Frenchman will look to make up for some of the points lost from the relay DQ in tomorrow’s skins – the three-round 50 free eliminator that are worth up to triple points.

“Yes,” he said with a smile when asked if he felt a bit of extra pressure to perform in the skins. “I hope to swim fast tomorrow. It will be tough because I think Vlad Morozov will swim fast as well, so let’s see. I think I’m better than Indianapolis and Naples. I have to work on my skins for Vegas. There is a lot of good swimmers in the 50, I want to score points for my team.”

Gibson was particularly impressed with 18-year-old Canadian Kayla Sanchez, who finds herself atop the MVP standings heading into Day 2.

“Young little Kayla Sanchez, she really stood up,” he said. “Taking the win in the 200 free, extra points in the 50. Awesome night for her, awesome.”

And heading into Day 2, the coach is making sure his swimmers are aware of what’s on the line here in London despite the fact they’ve already secured a spot in the League Final.

“This is still the European Championship Derby. We want to be the best club in Europe. We want to go into Vegas undefeated. But so does Rob (London GM Rob Woodhouse) and London Roar. So there is something on this meet, and we’re not going to let go of it.”

The biggest highlight of the day came from London’s Minna Atherton, who narrowly missed the world record in the women’s 200 backstroke. Atherton swam a time of 1:59.25, 0.02 seconds off of the world record held by Iron’s Katinka Hosszu.

Atherton is the only swimmer to have set a world record in the ISL, having done so in the Budapest match in the 100 back.

“I was a bit surprised with how I’ve been swimming lately, but I’ve been training really good,” said Atherton after Day 1.

Hosszu has found Atherton’s emergence both impressive and motivating.

“I’m sure she’ll eventually get that time,” said Hosszu, who had a win of her own in the 400 individual medley. “It’s cool to see a younger swimmer coming up, on the one hand, but on the other hand, of course, it is hard to see your own world record going down. But, it’s also motivating. I definitely need to step up and try to race as well.”

The 19-year-old Atherton has really enjoyed competing with the Roar, and finds that the team aspect makes it a bit easier to step up and perform.

“There’s not as much pressure to do really good times,” she said. “I love my team, so I just go up there and race for my team. It’s been really fun.”

Something both Manaudou and Atherton enjoy about the league is the increased opportunity to race against the sport’s elite.

“I think it’s amazing,” said Manaudou. “This competition is amazing for us because we can race the best swimmers in the world.”

“It’s a great opportunity for everyone in the sport to race more,” added Atherton. “Obviously, there’s normally just one big event each year, and with the ISL there will be a lot more.”

Hosszu finds her Iron club back in fourth at the end of Day 1, trailing the Aqua Centurions, but promises to continue to battle to the end.

“I’m going to try to do the best for my team,” she said. “I’m going to be fighting for sure. I’m trying to get my team ready for tomorrow, we definitely don’t want to get fourth.”

And despite the fact that Hosszu acknowledges her club won’t qualify for the Final, her message to her teammates is simple.

“I do like to keep it real,” she said. “I told them we’re not going down without a fight. We’re going to try and get every point we can, and at the end of the day we’ll be proud with how we did.”