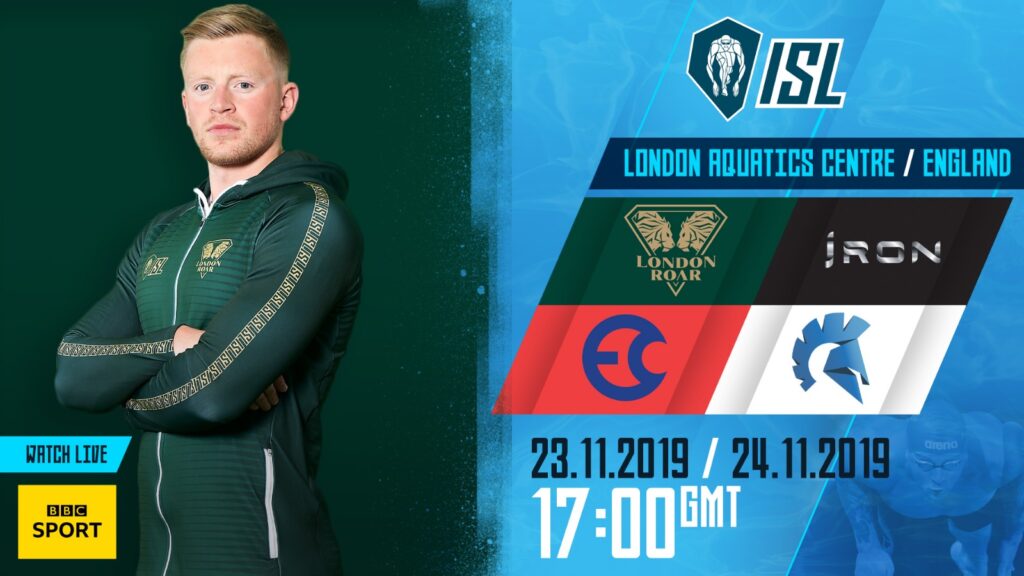 The two-day match at the London Aquatics Centre will be streamed live Saturday and Sunday across the BBC Sport’s digital channels including BBC iPlayer, website, app and IPTV.

Peaty, a member of the London Roar, is the reigning Olympic champion in the men’s 100 breaststroke, and is the world record holder and World Champion in both the 50 and 100 breast.

Sjostrom (Energy Standard) is the holder of six world records, the most of any swimmer on the planet, and Hosszu (Iron) has five. Both athletes have won match MVP so far in the ISL season.

Le Clos, Sjostrom’s Energy Standard teammate, was the 2012 Olympic champion in the 200 butterfly, defeating Michael Phelps, and is the only swimmer to beat Caeleb Dressel in an individual event so far this season.

The match will feature the four European clubs – the London Roar, Energy Standard, Iron and Aqua Centurions – going to battle for the first time.

“We are very pleased to secure streaming coverage with the BBC for the ISL London match,” ISL President Konstantin Grigorishin said. “This agreement shows the great interest that is developing around our ground-breaking professional league that regularly showcases our sport’s stars.”

“We have partnered with premium networks in six continents for the first season of the ISL, and we expect more to come on board as awareness of the league grows amongst sports fans who enjoy this revolutionary competition.”

More than $4 million in appearance money and prize money for clubs and athletes will be awarded during the season. Men and women share equal prize money and media attention as they go to battle for their respective clubs. The ISL is engaging sports fans each weekend with fast-paced two-hour matches, cutting-edge television production, including a unique camera plan and behind-the-scenes access, and a never-before-seen live show.