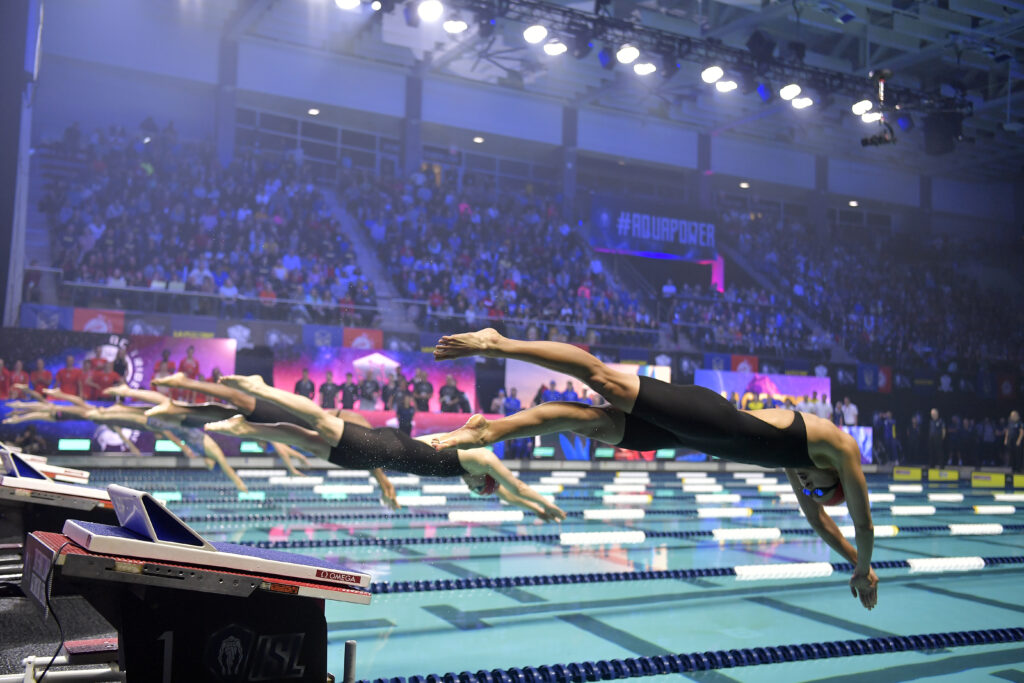 Similar to what happened in the Naples match, the International Swimming League’s US derby in College Park, Maryland, came down to stunning skins finale as the LA Current engineered a massive comeback on the Cali Condors to win by just 5.5 points.

Last month in Naples, the Condors suffered a similar defeat with Energy Standard coming back and beating them at the end in the skins (the three-round 50 freestyle eliminator).

“As everybody knows, looking at the score, it’s all about the relays and the skins,” said Cali general manager Jason Lezak post-match. “We actually had some better relays here than we’d had at some of the other meets, and then it came down to the skins and that’s where we fell short, just like in Naples. Tough loss right at the end, a couple of points in Naples, five and a half here.”

Caeleb Dressel, who won his second MVP award for the Condors with an ISL record 61.5 points, was not satisfied with his club’s third straight runner-up finish.

“I’d much rather get the team title than the individual (MVP),” said Dressel. “It is a competition, and it’s not an individual one. I’m a fierce competitor, but it’s the team title that we were going for, and we didn’t get that. So we’ve got to set a standard a little bit higher next time.”

Despite the disappointments, the Condors have come together and really gelled through their inaugural season, leaving both Dressel and Lezak optimistic heading into the December’s Grand Final in Las Vegas.

“I think we have a lot of good team chemistry which is important, and I think that’s why we do well,” said Lezak. “Our team gets along well, they cheer for each other and motivate each other, and I’m really happy with the team we have.

“Everyone has their own strategy going into Vegas. You’re going to see world records. I don’t think anyone’s going to show up to Vegas not ready to swim fast.”

The key to victory for the Current was the performance of Béryl Gastaldello, who won five races, including the women’s skins, to finish second overall in the points race with 51.5.

“It’s amazing, I’m very happy,” said Gastaldello after winning the skins. “I just started training a year ago for the sprints, it’s really paying off. I did it for the team. Very, very excited.”

Current GM Lenny Krayzelburg was anxious watching that women’s skins race as his team was trailing in the standings.

“I was pretty nervous,” said Krayzelburg. “In the first round of the women’s 50 I actually couldn’t watch. Once we got Béryl in there it was pretty exciting. She had an incredible match overall, and the energy just kept rising obviously when she made it through the second round. We just started really feeling it and you could see our whole box just raising up the level of excitement.”

Having swimmers with a wide range of talents like Gastaldello, who won races across three different strokes this weekend, is one of the key strategies Krayzelburg had planned on since taking over the GM job.

“When I was trying to put this team together at the beginning of the season, my goal was to really be able to assemble a group that is diverse, that can give us flexibility to move people around,” he said.

“People make some sacrifices, save up some of our people for the skins without using them earlier in the matches, and obviously it was on full display today where we really took advantage of it.”

In the race for third, the DC Trident managed to defeat the NY Breakers by 7.5 points.

DC’s Cody Miller believes the league has taken the sport to a new level as it continues to evolve.

“I think we’re on the cusp of really growing the sport and moving it in the right direction,” said Miller. “Today was just a blast.”

“Although there’s four teams and we’re fighting it out, you’ve got a battle for first and second and a battle for third and fourth, but ultimately I feel like it brought everyone together,” he said.

“To be a part of an event like this, even if you’re trying to beat another team, there’s really a big camaraderie about it. Even with your competitors. It’s fun. And that’s the biggest difference, having that fun aspect as a pro.”