ISL AIDS COMERFORD IN TRANSITION TO LIFE AS A PRO 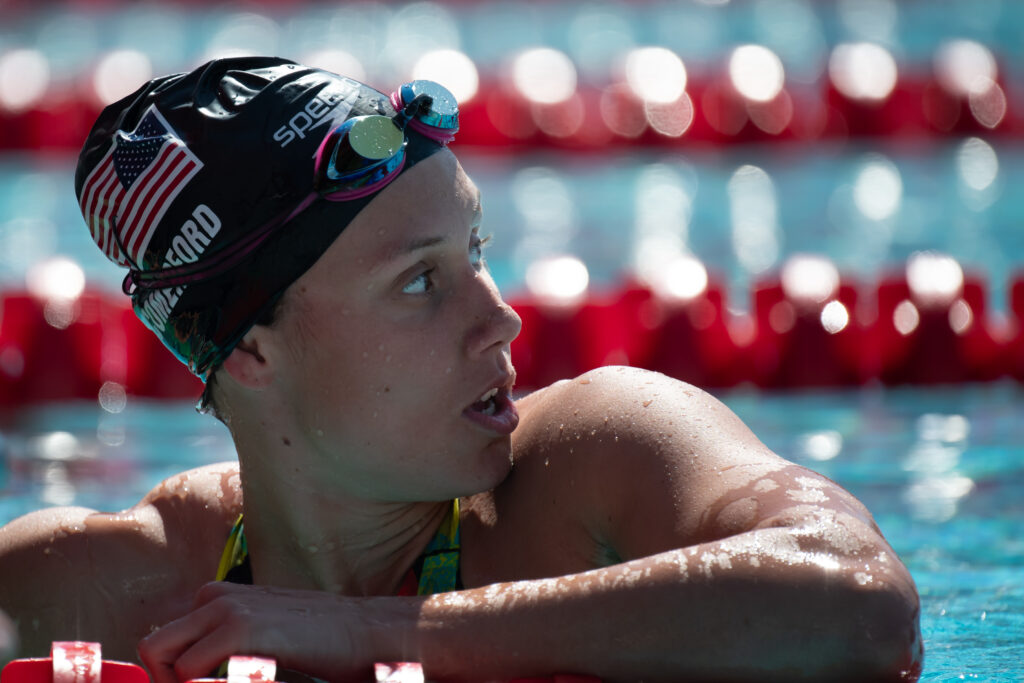 Transitioning from college into life as a professional athlete will never be an easy one.

In the past, this statement holds particularly true in the sport of swimming, where there has been a serious struggle in figuring out how one can build a sustainable life while competing in the sport.

But for Mallory Comerford of the Cali Condors, the launch of the International Swimming League in 2019 has allowed for a smoother-than-expected move into the pro ranks after graduating from college just a few months ago.

“The timing of the league honestly came at the perfect time in my career,” said the four-time NCAA champion. “A lot of people have told me that the transition from being a college athlete to a professional athlete can be very challenging, but I think the ISL is aiding me in that process.”

“By being able to compete and be a part of the Cali Condors, I have a focus other than training leading up to the Olympics. I have a whole group of teammates who I can turn to and stand by throughout this whole process.”

And as the ISL is helping athletes successfully become professionals, it is also allowing swimming to become more of a mainstream sport, rather than it only be focused on during the Olympics.

once-every-four-year sport,” said Comerford. “The league is creating so many opportunities for the athletes, and it encourages us to come together to support a common cause. It is uniting the sport

and allowing us to create a story for people to follow.”

Comerford’s experience through two matches of her ISL career have been nothing but positive. As has been reiterated by several athletes, the experience has far surpassed what she expected coming in.

“I think I am speaking for many people when I say that the first two ISL matches have gone above all of our expectations,” she said. “The environment that has been created is unlike any other meet in the world. Being able to compete in such an electric atmosphere enables us to have fun every time we step up on the block and teaches us to perform under pressure.”

Similar to Kelsi Dahlia, who Comerford used to compete alongside with the Louisville Cardinals in the NCAA and now does so on the Condors, her experience racing in college has provided a significant benefit to her ability to perform in the ISL.

“I do think racing short course yards so much over my college career helps me with the short-course meter format – especially the quick turnarounds between the events. I think that college swimming helped prepare me for the intensity of the ISL meets and to be prepared to swim whatever my team needs me too.”

The Condors have put themselves in a good position with only two matches left. They’re essentially a lock to advance to the League Finals in Las Vegas as the leading US-based club, and Comerford is confident that they’ll make some noise when they get there.

“I think the key for the Cali Condors is to keep doing what we are doing,” she said. “I truly believe we have created the best team culture and we are having a blast while doing it. As long as we are enjoying our time together, I know we will swim fast and do something crazy in Vegas.”

The 22-year-old saw what Emma McKeon of the London Roar did in the two most recent matches that the Condors weren’t competing in, and as someone who swims plenty of the same events, is looking forward to racing the Australians in Vegas. But, first things first. The upcoming derby match featuring all four US-based clubs is on the forefront of Comerford’s mind for the time being.

“Emma is an amazing swimmer and it is awesome to compete against her,” she said. “I think the ISL has created such a unique opportunity for us to race swimmers that we usually only get to

race once or twice a year. It is so fun to be in an environment with the world’s best swimmers and be able to compete with them all.”

“I think that the derby meet will be a ton of fun, but the Cali Condors are ready.”