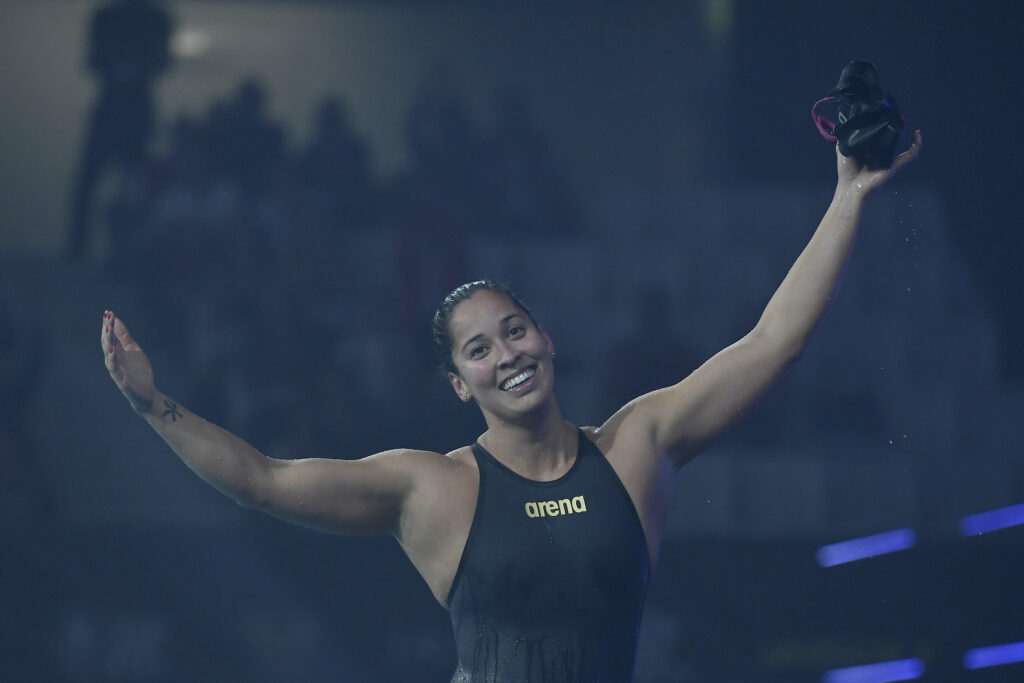 The International Swimming League’s fourth match in Budapest saw the Group ‘B’ clubs go head-to-head for the second time in consecutive weeks, and there were several differences in the scoring distribution between them compared to Lewisville.

The London Roar repeated their win from the first match, but were much more dominant this time around. The Roar improved by 21 points, bringing their total up to 505.5, and saw their winning margin nearly triple from 27.5 to 80.5 points.

Iron and the LA Current fought tooth and nail for second place, while the NY Breakers remained a distant fourth.

Below, find each club’s score in every event throughout the match, with their running total in brackets.

For a visual look at the data, check out the graph below. 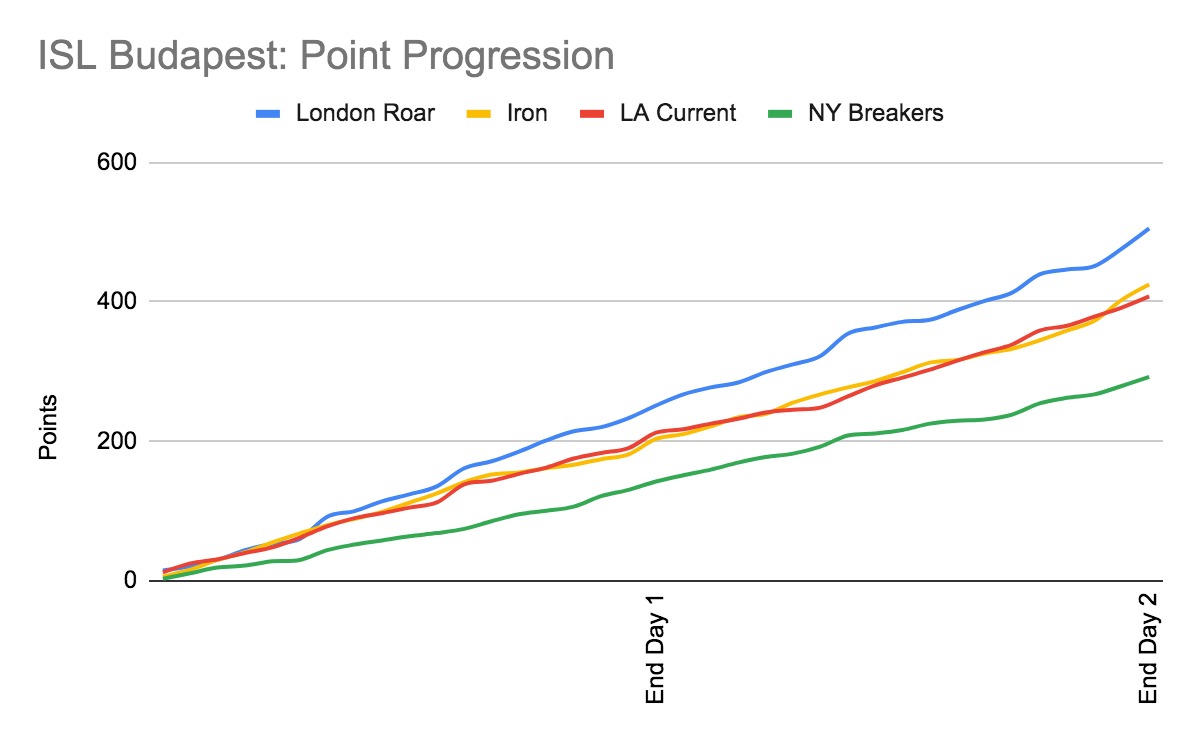 The point where the Roar really pulled away from the other clubs came on the latter half of Day 1. Entering the men’s 4×100 medley relay, the Roar were up 10 points on Iron and 23 on the LA Current. Seven events later (the 200 free, 50 back, and 200 breast, along with the relay), their lead had skyrocketed to 43 on the Current and a whopping 52 on Iron. From there they cruised to victory.

LA and Iron went back and forth between second and third all match, trading spots nine separate times. It was the skins that dealt the final blow, as Iron entered trailing by six points and wound up defeating the Current by 17.

Overall, Iron improved by 23 points from their first match, while the Current, who had a few key members absent, were 49 points below their previous mark. The NY Breakers also improved by 14 points, leaving LA as the only team who wasn’t able to up their score from Lewisville.

Below is a look at how many points each club scored in each respective set of events (strokes, relays, and skins). 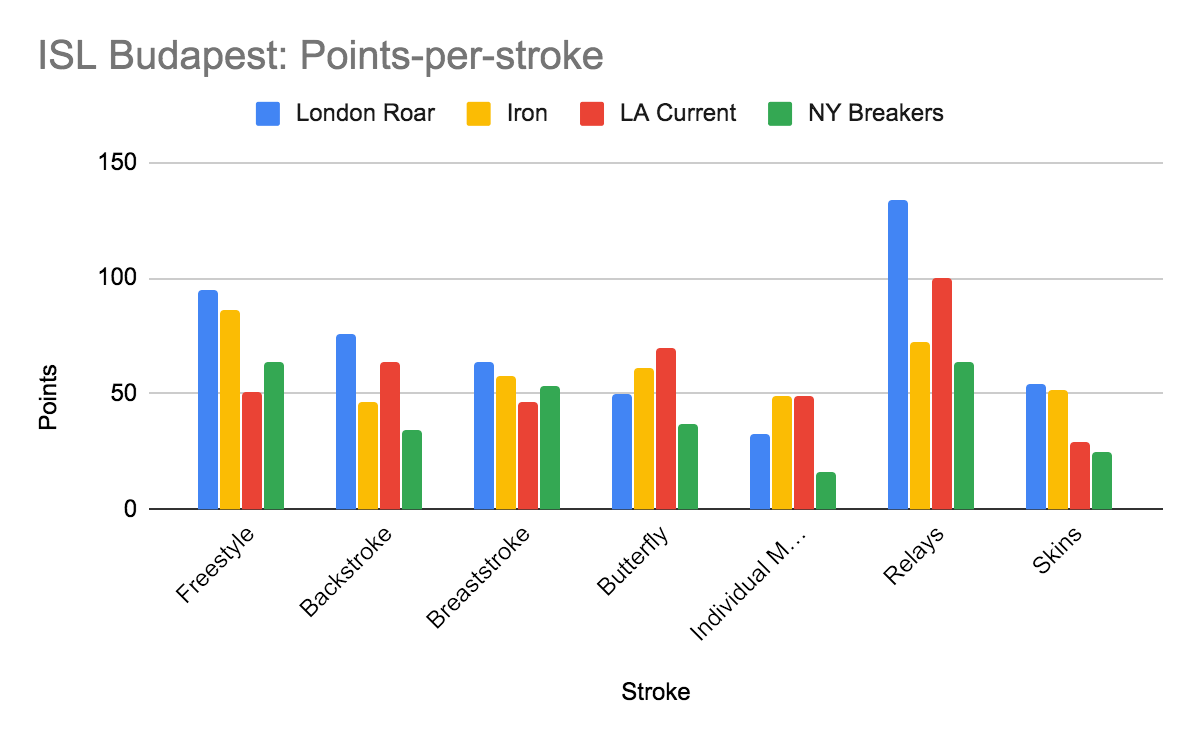 London managed to score the most points of anyone in five out of the seven categories, and improved from the previous week in six of them. Those were two keys to victory, as was their relay strength that scored 34 more points than LA and an incredible 62 more than runner-up Iron.

Iron’s biggest gain came in freestyle, where they were just eight points shy of the Roar after 32.5 separated them in Lewisville. They also were significantly better on breaststroke and the relays.

On the other hand, LA scored fewer points in all but one category compared to their first match. They maintained their advantage over the others in butterfly, though the gap closed a bit, and had a particularly severe decline in breaststroke, going from second to fourth in the club rankings.

The NY Breakers lost out big once again on individual medley, backstroke and butterfly, but some solid gains on freestyle and in the skins led them to their 14-point improvement. After having eight swims fail to meet the minimum time standard and thus lose them a point in the first match, they made a bit of progress, knocking that number down to six.