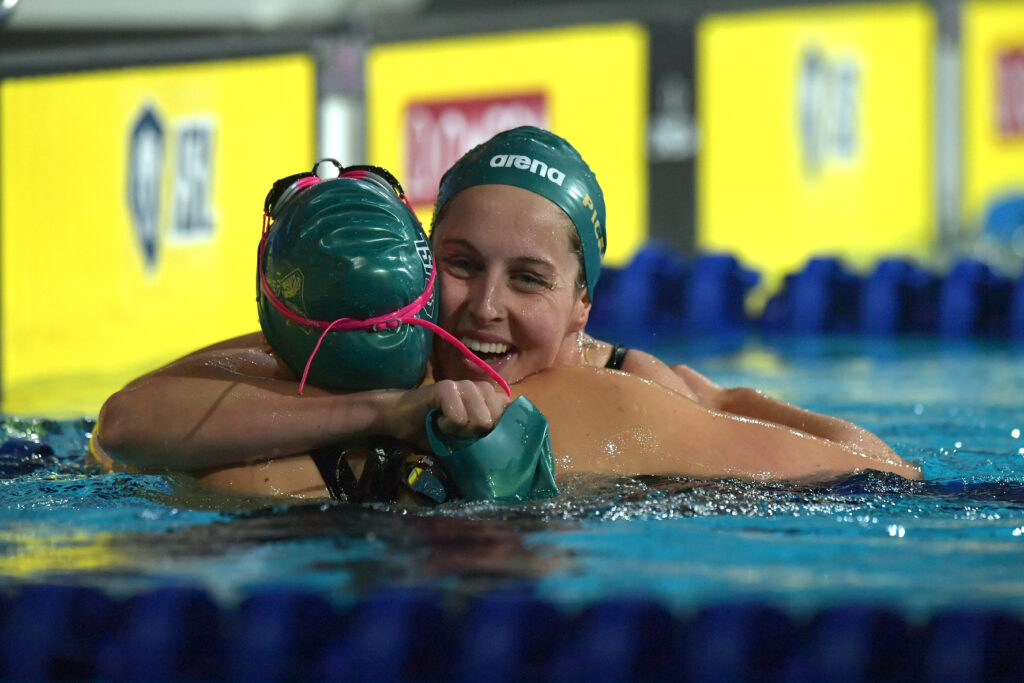 The pool was electric tonight in Budapest as fans at the packed out Danube Arena were treated to an exhilarating opening day of the International Swimming League’s fourth match.

The London Roar pulled away from what was initially a three-way battle for first place, finishing up Day 1 with 251.5 points to lead the LA Current (212.5) by 39.

“Really good Day 1,” said London Roar head coach Mel Marshall poolside. “We’ve got a lot to do tomorrow still. There’s no point in being complacent, anything can happen. We had a really strong Day 2 the last round, we’ve got to make sure we have an even stronger day tomorrow.”

Despite all of the success the club was having in the pool, Marshall’s highlight of her first ISL match (she was absent in Lewisville) was the club atmosphere.

Just as they were last weekend, the Roar were led by standout individual performances from Emma McKeon and Minna Atherton, along with some strong swims in the relays.

McKeon won both the women’s 100 butterfly and 200 freestyle, and Atherton won the women’s 50 and 200 backstroke, repeating their victories from Lewisville. The two swimmers head into Day 2 in a tie for second in the MVP standings, awarded to the swimmer who compiles the most points for his or her team, with 21.5 points. Iron’s Katinka Hosszu leads with 22.

The Roar won two out of three relays, which are worth double points, including a 1-2 finish in the women’s 4×100 freestyle that both McKeon and Atherton contributed to. Also coming out with some notable swims on Day 1 for London was superstar Adam Peaty, who was making his ISL debut. Peaty won the men’s 50 breaststroke, placed third in the 200 breast, and contributed to the Roar men’s winning medley relay.

Iron, who are a Hungarian-based club and thus had the home crowd behind them here in Budapest, had a much better performance than last weekend on Day 1. They trail the LA Current (212.5) by just nine points (with 203.5) relative to the 48 they were back in Lewisville.

Hosszu was Iron’s top performer with a repeat win in the women’s 400 individual medley, a runner-up finish in the 200 back, and a third place finish in the 200 free. They also had victories in the men’s and women’s 50 freestyle from Vladimir Morozov and Ranomi Kromowidjojo, and then capped things off with their first-ever ISL relay win in the men’s 4×100 free. Morozov, who won MVP last weekend, had the fastest split in the entire field to anchor that relay team to victory.

“It’s all about having fun and having healthy competition, but at the end of the day you have to perform as well, so I’m happy to win,” said Hosszu post-400 IM. “You can see the crowd is unbelievable.”

Leading the way for the Current was Tom Shields, Andrew Seliskar and Ryan Murphy, who all repeated wins from last week in the men’s 100 fly, 400 IM, and 200 back respectively.

“The atmosphere in Budapest is incredible, so everyone’s fired up and the competition’s fast,” said Seliskar after his 400 IM win. “The team battle is really close, we’re being very strategic about where we’re placing athletes in which events, so I’m just trying to do my part to help the team.”

The NY Breakers had to wait until Day 2 in their first match to claim a victory, but managed to grab two on the opening day in Budapest as Emily Escobedo and Marco Koch went back-to-back in the women’s and men’s 200 breast.