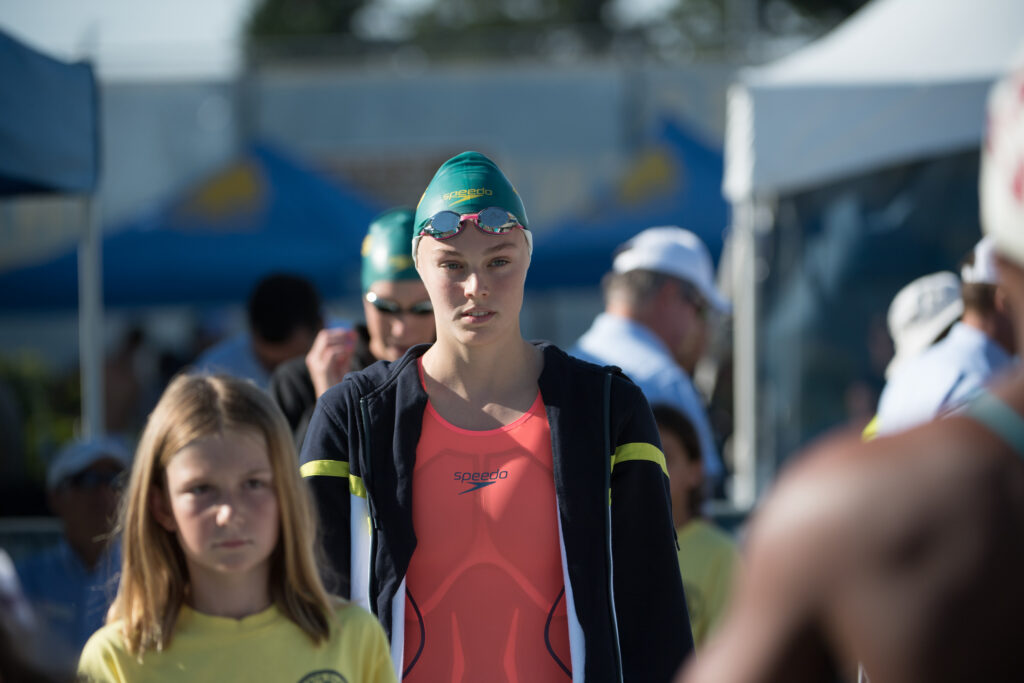 Plenty of the biggest stars in the sport were in action last weekend at the first match for Group B swimmers of the International Swimming League season – Olympic champions Katinka Hosszu, Ryan Murphy, Nathan Adrian and Kyle Chalmers – to name a few.

But in the midst of competing against so many big names, it was the London Roar’s Minna Atherton who really stole the show.

The 19-year-old Australian dispatched Hosszu and American former World Record holder Kathleen Baker with relative ease in the women’s backstroke events, sweeping the 50, 100, and 200-metre races. Atherton also had two crucial legs on the Roar relays, and ended up with 35 points scored, tied for sixth overall in the match.

“Coming into the meet I didn’t really know what to expect, but it was a very exciting competition

and quite different to any other meets I had done before,” said Atherton in an interview. “I really enjoyed the experience and I’m looking forward to this weekend.”

How well she performed in Lewisville wasn’t necessarily a surprise to her – it was how well she held up under the high volume of races.

“I have been doing some good training back home in Australia, though, so I came in to the meet

hoping to do well and I am very happy with the times that I did,” she said. “I was a bit surprised as I thought I would have been a bit more fatigued after so many races with not a lot of recovery.”

Coming off of a six-medal haul at the 2015 World Junior Championships, where she set a pair of World Junior Records, Atherton was relatively quiet on the international scene up until this past July when she had a breakout performance at the World Championships. Atherton claimed three medals, including a gold in the mixed medley relay and an individual silver in the 100 back.

Despite going through what many would perceive to be a rough patch over the years in between major successes, the Brisbane Grammar product doesn’t look at it that way.

“It wasn’t actually too difficult, as throughout 2017 I was focusing on enjoying my year 12

experience and doing well in school, so that once I graduated, I could fully focus on swimming

with no regrets,” she said. “The biggest change I made was probably changing my training around from more sprint based to more 200m-based training. I think I have also started having more fun and enjoying the sport a lot more.”

“I have become a bit more confident over the last year, but there is always more to learn and I am looking forward to more opportunities to gain more experience in the future.”

Every swimmer featured on the Australian National Team website has a quote to go along with their bio. Atherton’s? ‘Trust the process’.

And that’s a sentiment she’s sticking by despite all of a sudden being so close to some of the women’s backstroke world records.

“I can’t predict how I’m going to go at the next few matches as every meet is different,” she said, responding to a question about the prospects of her lowering a world record soon. “I try not to

think about the outcome of my races and just focus on the process.”

As for the opportunity to race against some of the world’s best in the ISL, Atherton was tight-lipped, but still enthusiastic. Along with Hosszu and Baker, she’ll have the chance to face fellow Aussie and training partner Emily Seebohm along with reigning SC World Champion in the 50 and 100 back Olivia Smoliga of the United States, later on in the season.

“I’m always excited to race against the top swimmers in the world.”