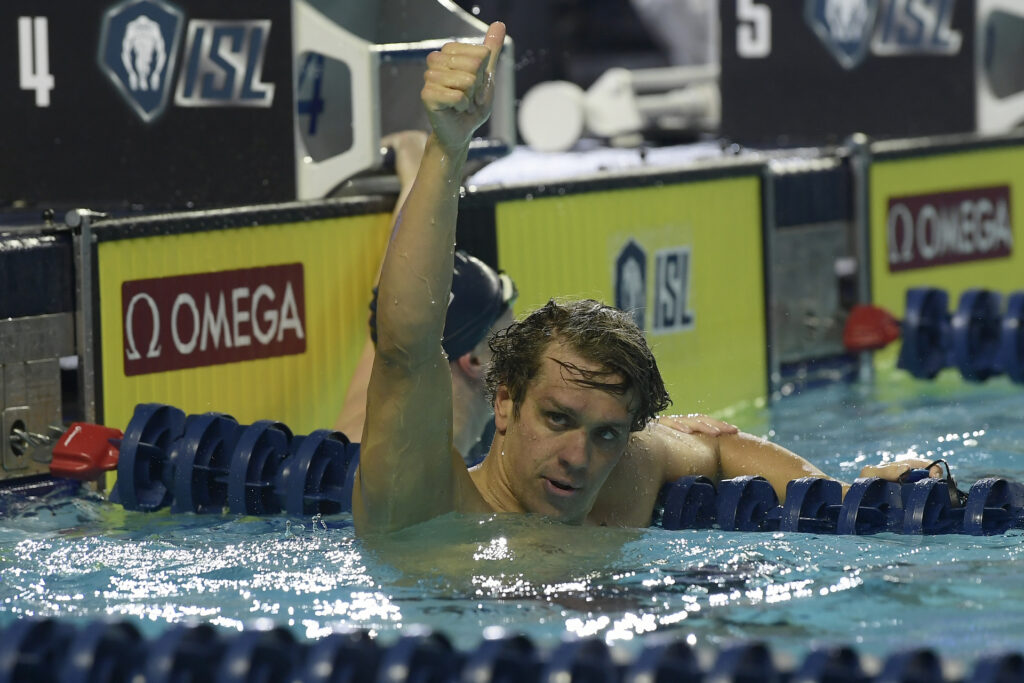 The development of the International Swimming League brings a lot of new aspects to the sport. Never before has there been a professional league that implements team scoring, prize money, and a fast-paced format quite like this in swimming.

But for Tom Shields, this is a manifestation of something he’s been thinking about for quite some time.

“I sat down with Brett Hawke and Jack Roach (both coaches on the LA Current, Shields’ ISL club) at WUGs (World University Games) in 2011 after the meet had ended and came up with a ‘pipe dream league’,” Shields said in an interview. “International Games are cool, but I was interested to see if we could come up with a made-for-TV event, just for fun, that would attract more eyes more consistently.”

This fantasy league that Shields came up with ended up looking almost exactly the same as what the ISL would eventually become eight years later.

“We landed on a dual meet format, short course, 12-man teams, tight turnaround times, etc.,” he said. “Without any of our involvement, the ISL uniquely discovered the same idea and pursued it. I got involved in the late stages, and am not looking back.”

“I view this as the summation of my life’s work, and am unbelievably stoked to see so many people hop on board. I have been on this soap box for years, and I would be a fool to not put my money where my mouth is.”

And so far Shields has done just that. In his league debut this past weekend in Lewisville, the 28-year-old was one of the top performers, winning the men’s 100 butterfly and placing second in both the 50 and 200 fly. He also had a pair of quick legs on LA Current’s freestyle relays, and ended up leading the club with 35 points.

While his swims may have turned some heads, they were not a surprise to the man who has six individual NCAA titles and six individual Short Course (SC) World Championship medals to his name.

“To be honest – hopefully without sounding too arrogant – yes,” said Shields when asked if he expected to swim as fast he did. “I have been 46-mid on relays in the past, namely SC Worlds (in) ‘16. I wasn’t in too good (of) shape then, so I figured I could be similar here, as we at my home club have been training really well. In the fly (events) I have been pretty comfortably breaking or being around 22.5/50/1:50 (50/100/200) for a few years, and usually just have to find the right amount of energy to make those happen.”

He was right on his target time in the 50, and was faster in the 100, but was about two seconds off in the 200. Now with one match of ISL experience under his belt, Shields knows what changes to make leading into Budapest.

“I was obviously way off in the 200 fly, and think I could have been closer had I pushed my underwaters better toward the end of the race, but alas, I was too tentative,” he said. “It was at the end of a triple (three races in a row) in (a span of) 20 minutes, so I didn’t know quite how much energy I would have left to spare. We will see next weekend, as I hope I don’t weenie out again,” he joked.

The 2016 Olympic gold medalist had the opportunity to race against Kristof Milak in Lewisville, the 19-year-old Hungarian who has quickly asserted himself as one of the best butterfly swimmers in the world after breaking Michael Phelps’ 200 world record this past summer. Shields looks forward to potentially having himself and Milak, along with Chad Le Clos and Caeleb Dressel (who raced the first two matches), all clash later on in the season.

“I would love to get all of us together! I feel quite elite – short course at least – and think it would be great. It was great to meet Kristof, who is a very charismatic and easy going kid. I of course love Chad and Caeleb and look forward to the season progressing.”

But for now, his focus on Budapest this weekend.

“First things first: rematches with not only Kristof, but (Szebastian) Szabo (winner of the 50 fly in Lewisville) and the other 5-6 guys in those fly (events) next week.”