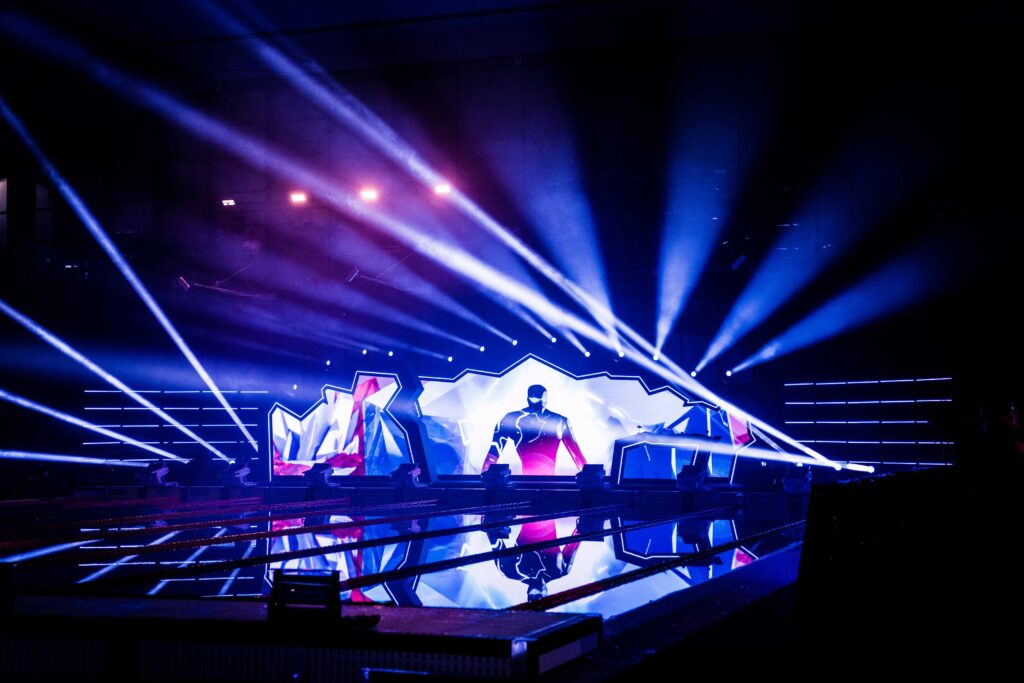 The International Swimming League’s third match in Lewisville is in the books, and it was the London Roar who came out and won by 27.5 points over the LA Current as all four clubs competing were making their ISL debut.

The Roar’s attack was led by some of their big guns, with Emma McKeon, Cate Campbell, Minna Atherton, and male captain Kyle Chalmers all among the match’s top-10 point scorers.

But where was London able to pull away from the field? How did the other clubs fare throughout the match? Below, take a look at each club’s points scored in every event, along with their running total in brackets.

For a visual look at the data, check out the graph below. 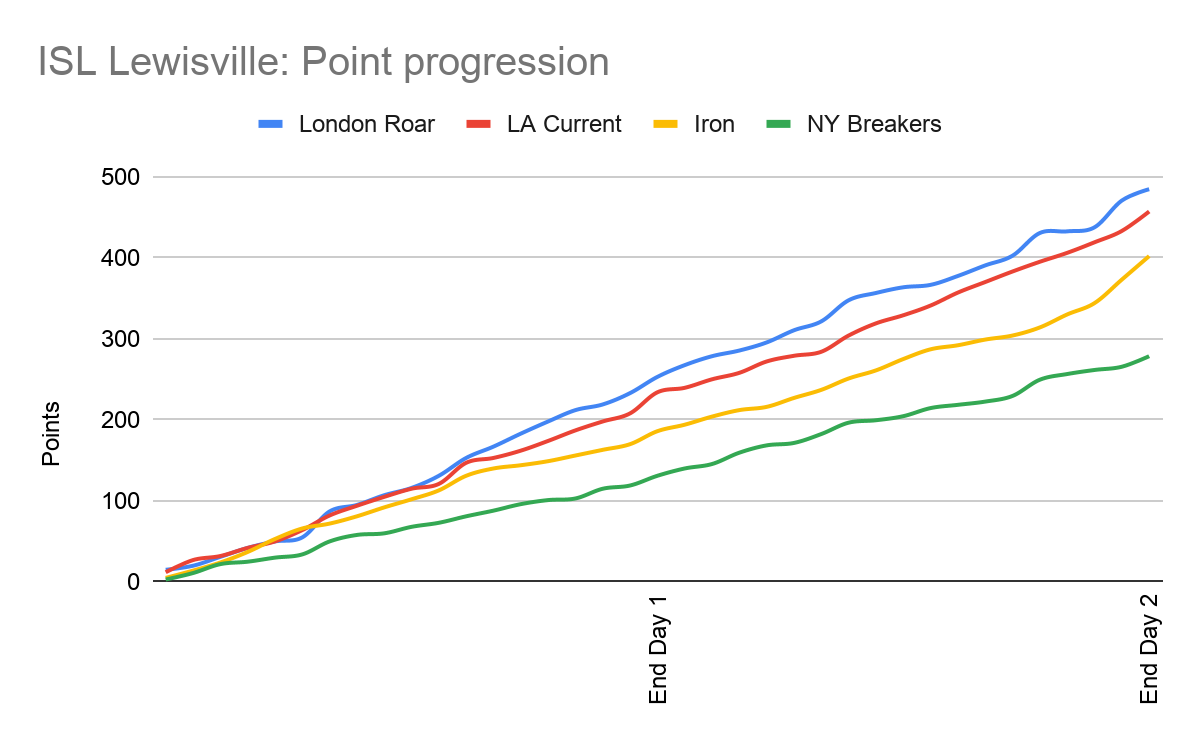 What quickly becomes clear here is that it didn’t take long for the London Roar, LA Current and Iron to separate themselves from the NY Breakers. The Breakers found themselves 20 points back of third place just five events into the match.

Iron had a particularly weak second half of Day 1, which ultimately left them in no-man’s-land heading into Day 2, too far back of the top two teams to catch them but also nothing to worry about coming from behind.

Between London and the LA Current, the 200 freestyle on the opening day was a significant turning point, as the Current came into the women’s race down by six points and exited the men’s trailing by 21. From there, all four clubs essentially maintained their position the rest of the way. A late push from LA towards the end of the match came to a screeching halt when one of their mixed free relays got disqualified.

Iron was also significantly better on Day 2 than Day 1, which is something to keep an eye on for the Budapest match where they’ll be in front of their home crowd.

To get an idea of which clubs are strongest in each stroke, take a look at their points-per-stroke below. 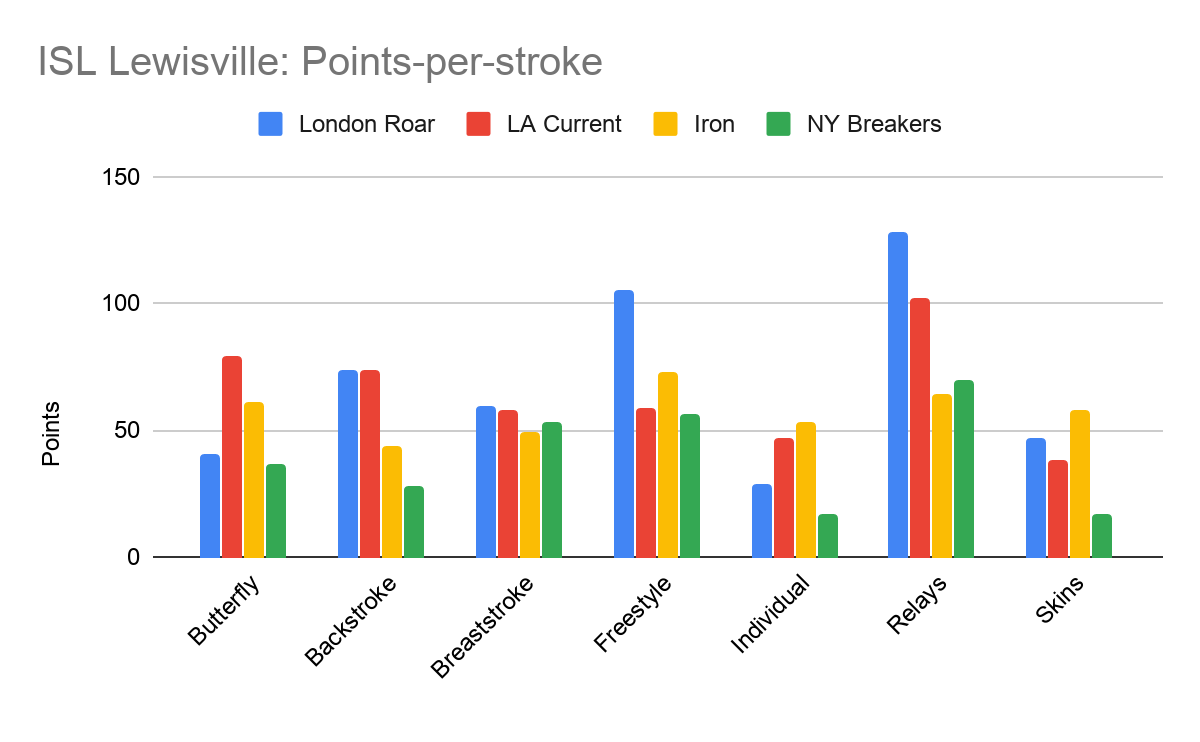 It quickly becomes clear that there are two sets of events where the London Roar gained their biggest advantage: freestyle and relays. This isn’t much of a surprise, given the strength they have there. Campbell, Chalmers and McKeon combined for four individual free victories, and factored in on all four of their winning relays. In terms of where they can look for improvement moving forward, it would be butterfly and individual medley.

The LA Current weren’t terrible in any one stroke, but also didn’t blow away the field anywhere either. They led on butterfly, but probably would’ve liked to be closer to London on freestyle given how talented their swimmers are in that area.

Iron received a big boost on the skins and were good on free, but if they want to contend for a top-2 finish in Budapest, will need to be better on relays.

The Breakers lost out big on backstroke, IM, and the skins – three areas they’ll want to shore up. It also hurt them having eight different point deductions for swimmers missing the minimum time standard – the other three clubs had that happen four times combined.