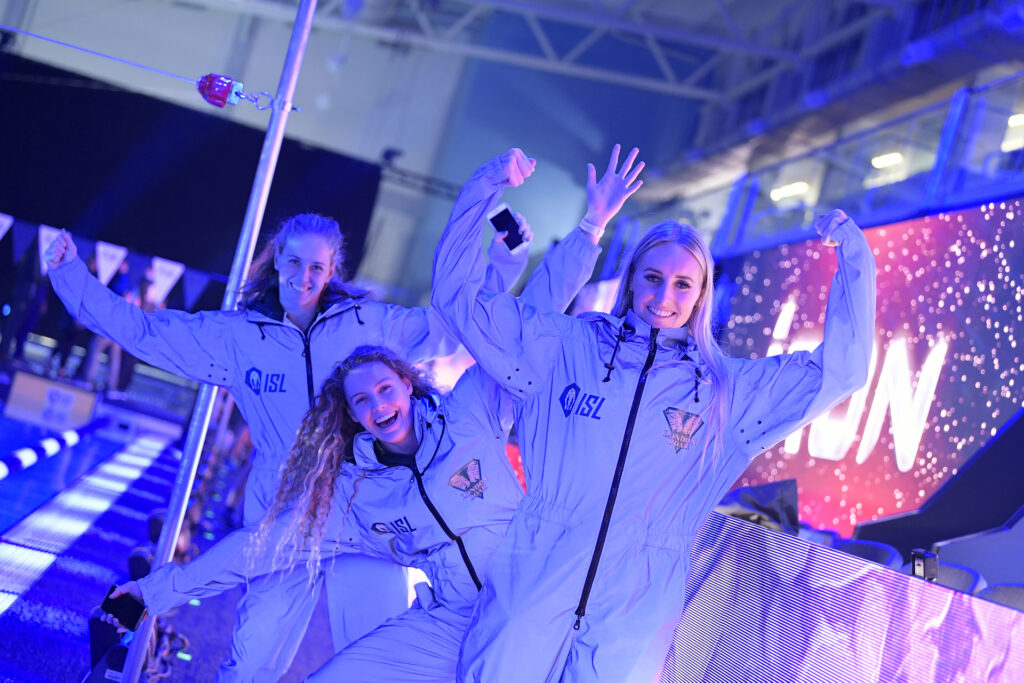 The first of two days of the International Swimming League’s third match in Lewisville, Texas has wrapped up, and it yielded a lot of excitement as all of the athletes competing were making their league debuts.

After watching the four clubs in Group ‘A’ compete the last two weekends in Indianapolis and Naples, the swimmers were anxiously anticipating getting their chance to race.

“To finally be here, to see everything come to fruition, it’s an awesome time,” said NY Breakers captain Michael Andrew, who swam five times on Day 1 and leads his club with 15 points. “I don’t get nervous for swim meets anymore…yesterday that’s all I felt. The anticipation and the excitement that was coming through was something I haven’t felt in a long time.”

The athletes came in with lofty expectations, having watched the previous matches on television, but the experience was even better than they had imagined.

“I think I can pretty much speak for everyone, at least everyone on my team, that it was a fantastic first day. It exceeded everyone’s expectations,” said Cate Campbell, who won the women’s 50 freestyle and was also a key member of the London Roar’s winning women’s 4×100 free relay.

“Met and probably exceeded as well,” said Iron’s Vladimir Morozov, who won two individual events to lead the MVP race with 23 points scored. “I was expecting something like dual meets in an NCAA competition, but this is even more fast-paced. There is even less break in between the events, and it’s one of a kind, something new. So, it exceeded expectations for sure.”

“I think it was even more fun than I expected,” added Iron captain and owner Katinka Hosszu. “A lot of energy, and it was definitely much different than just going to a meet and swimming your event and that’s it.”

Hosszu, nicknamed the Iron Lady, is embracing the ‘team’ aspect the league offers.

“Once I finished with my races, cheering for the rest of the team and just having a team named Iron is really cool for me. I’m really proud of it and (I’m) really happy to be a part of the ISL.”

Campbell and her London Roar teammates had a very successful opening day, leading the club standings with 253 points. The LA Current sit second with 234.

“I think that the team camaraderie that we’ve managed to establish just in the last couple of days that we’ve been together really shone through,” remarked Campbell. “Obviously London Roar came out on top today which is exciting, and I think that there was a stretch in there where we won six races back-to-back. We won races that we technically shouldn’t have, and we scraped a couple of extra places, and you could see everyone was pulling together and swimming for their teams.”

After a relatively light schedule on Day 1, Campbell is looking forward to racing the 8 to 4 to 2 eliminator-style skins race for the first time on Sunday.

“I’ve had a very easy introduction to the hectic ISL schedule today with just the two races,” laughed Campbell. “Tomorrow I’m looking at three or four, with obviously the skins being the last race. So, I think it’s exciting, I’m really looking forward to it. Everyone’s swimming fast, so I think everyone’s going to be in for a good show tomorrow because the field is swimming quickly. To qualify for each round, you’re going to have to be swimming very fast.”

LA Current captain Nathan Adrian enjoyed the cheers he and his teammates got as one of the two American-based clubs competing.

“It’s cool, I guess we’re the home team which is awesome,” he said. “We’re getting a lot of cheers out there; it gives our swims just a little more energy. I think that’s just always fun; it plays off the format really well. From the second we walked in we knew this was something special, having the lights out there, the DJ out there, it’s definitely something new.”