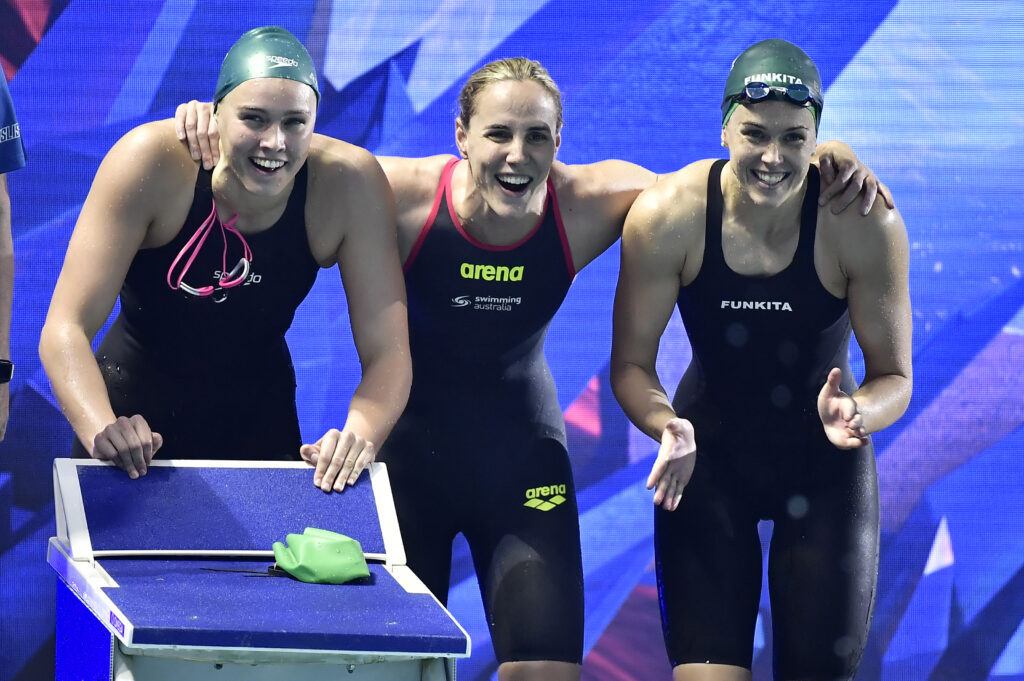 Day 1 of the International Swimming League’s third match in Lewisville was another thriller as the American crowd was treated to some great club battles and plenty of exciting races.

The London Roar and LA Current battled head-to-head throughout the session, and after 11 events, hadn’t been separated by more than 10 points. However, the Roar put on a surge down the stretch, winning six consecutive events (and seven of the last nine) to exit the day leading the Current by 19 points with 253.

Leading the way for London was Australians Emma McKeon and Minna Atherton, who both won a pair of individual events. McKeon won the women’s 100 butterfly and 200 freestyle, and Atherton claimed the women’s 50 and 200 backstroke. They currently sit second and third in the race for match MVP, awarded to the top scorer at the conclusion of Day 2, with 22.5 and 21.5 respectively. Vladimir Morozov of Iron leads with 23.

Overall the Roar came out on top in 10 of the day’s 19 races, including two of the three relays which score double points in the ISL. Cate Campbell, another Aussie, won the women’s 50 free and also had the fastest split on their winning women’s 4×100 free relay, and Brazilian Guilherme Guido topped the men’s 50 back field and also provided a key lead-off leg on the men’s 4×100 medley relay

Bishop felt that once the club got on a roll, each victory gave them more confidence heading into the next one.

“That’s what happens. We have a really great team. We’ve come together from all around the world, we’ve come together and gelled in about two or three days. And the energy’s just built within. And we’re winning the points score, so it’s fantastic.”

American Ryan Murphy was the top point-scorer for the LA Current, compiling 19.5 that included a win in the men’s 200 back and a runner-up finish in the 50 back. Down by 25 with only one event remaining, their quartet of Nathan Adrian, Ryan Held, Matt Grevers and Michael Chadwick pulled out the victory in the men’s 4×100 free relay to bring the gap down by six.

Iron had a flying start to the match, winning three of the first five events before slowly falling behind the two leading clubs. They sit third with 186 points, 48 back of LA.

Morozov managed to top all point-getters by winning the men’s 50 free, 50 breast, and producing a key leg on their free relay that placed third. Team captain Katinka Hosszu also had a strong start to her ISL career, placing first in the women’s 400 IM, third in the 200 back, and sixth in the 50 back for a total of 18 points.

NY Breaker captain and co-owner Michael Andrew led his club with 15 points, racing a total of five times that included a pair of fourth place finishes in the men’s 50 free and 100 fly.

“I’m happy to do what I can for the team,” said Andrew in a poolside interview during one of the breaks. “Some good races, some very painful races, but we learn from it and do what we can to get better for the next one.”

The Breakers trail Iron by 55 points heading into Day 2.