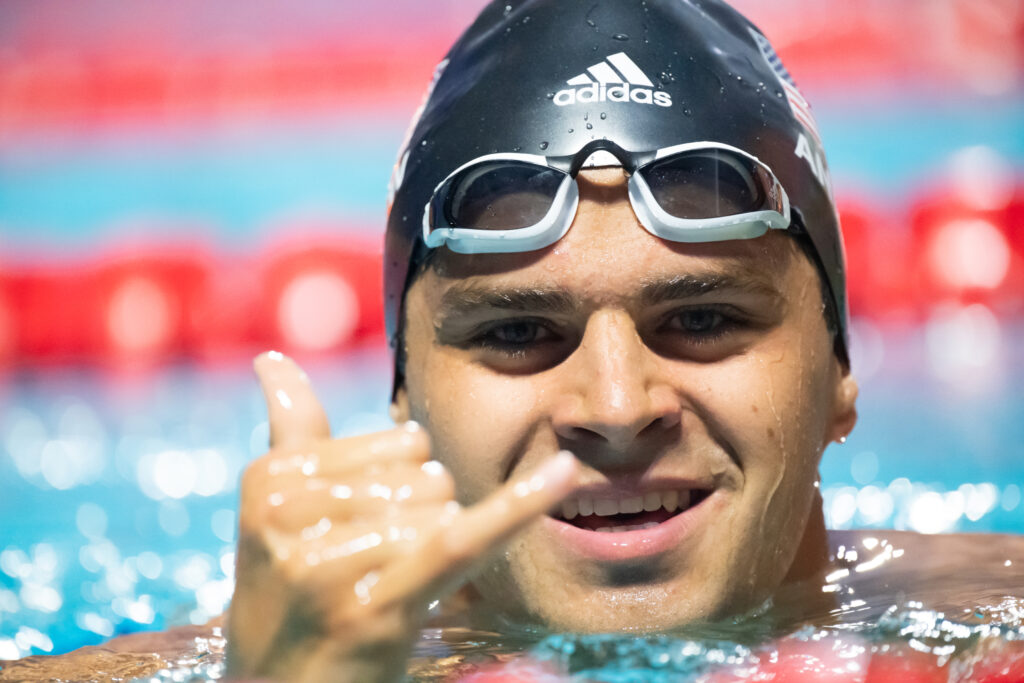 Competitive swimmers in the United States typically all follow the same path. After high school, they will head to college in the NCAA, and after that, shoot to make the Olympic team. If they fall short of that goal, many will retire while still in their early 20s.

He was homeschooled from a young age, trained by his father in a two-lane pool built in their backyard, and after immense success that included 32 US National Age Group Records, he turned professional shortly after his 14th birthday. That made him the youngest American swimmer in history to do so.

Rather than go the traditional college rout, Andrew sought out a career making a living by racing very frequently, signing endorsement deals, and promoting both through his various social media channels.

Now 20, the development of the new professional International Swimming League, the first of its kind in the sport, has come along at the perfect time for the South Dakota native who now resides in California.

“I’m thrilled that I get this opportunity early in my career, and I’m incredibly grateful for it,” said Andrew in an interview. “Beyond the ISL being very exciting for my career, I firmly believe it’s going to impact the sport in a massive way.”

Along with the league being a perfect fit for Andrew’s career, he’s even more excited for the opportunity it will bring other athletes in the sport and the potential growth it will give for swimming in general.

“I’m excited to see it give other athletes opportunities as well to earn (a) legitimate income from swimming professionally,” he said. “I believe the ISL is exactly what swimming needs to become a household sport. A sport that can be seen and followed all year, every year. It’s so unique and will give swimmers the exposure they need, and it allows for current fans and new viewers to enjoy the sport we know and love.”

The unique path Andrew has taken has forced him to do a few things: swim often, and swim fast, every time. And a lot of the competitions he competes in are short course meters, the same format of the ISL. These three factors give him an instant advantage over a lot of his competitors.

“I definitely believe training the way that I do, and competing very often with multiple events will help me in the ISL,” he said, referencing his Ultra Short Race Pace Training. “I still believe we (as a team) need to be wise with our race selection and scheduling. Ultimately that’s what will win competitions, but I do think as an individual I can thrive in this format.”

And like many other members of the ISL have noted, Andrew thinks that short course swimming is just plain more entertaining than long course. That, coupled with the focus on team scoring that has never before been used before in professional swimming, is what is getting the five-time Short Course World Champion excited to get going.

After forgoing college, he now gets the chance to swim on a club, race for his teammates, and challenge for titles.

“I love being able to compete for a team and working as a group to get points. It’s new in the pro world of swimming. I believe a major part of why NCAA swimming is so exciting is because of the team atmosphere and dual meet style competitions. The ISL is a much more advanced, professional version of those crazy fun matchups.”

And speaking of matchups, there are a few friendly rivals who Andrew has his eye on.

“Always love getting to race Vlad,” he said when asked about Vladimir Morozov, who he has faced numerous times in recent years at various competitions around the world. “He’s an incredible athlete and a friend of mine.”

“I’m also excited to have my friend Bruno Fratus joining (the) ISL with London Roar. He’ll add to the thrill in the skins races (the three-round 50 freestyle 8 to 4 to 2 eliminator). Bruno and I have raced skins together long course and it’ll be fun to go at it in short course.”