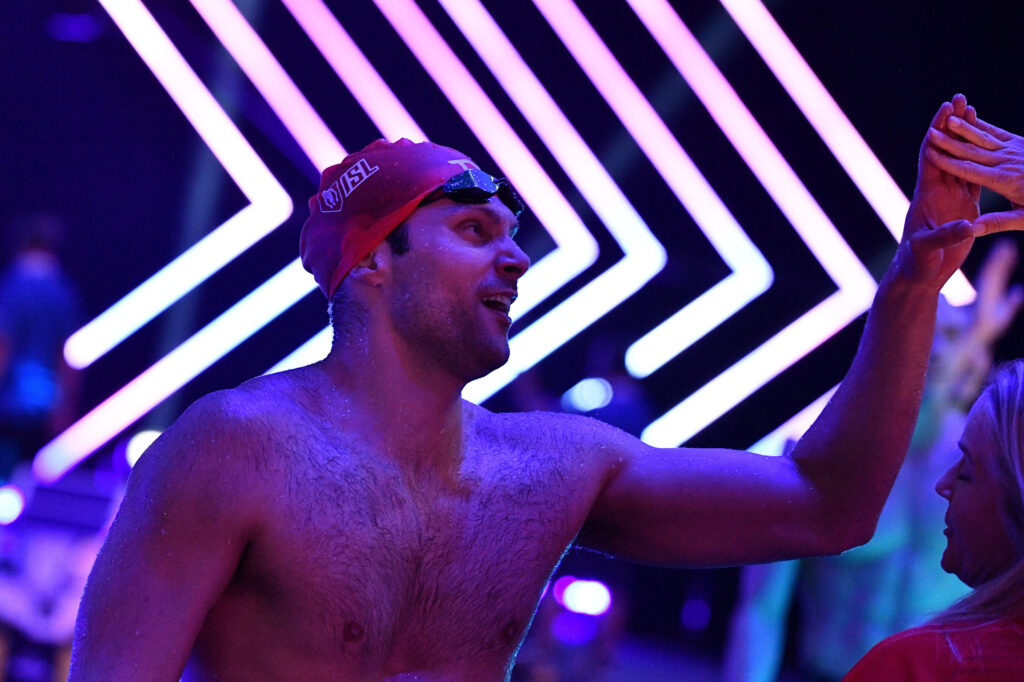 You would be hard pressed to find many athletes in the world of swimming who love the sport more than Cody Miller.

Miller, a two-time Olympic medalist, exudes a passion that is hard to miss through the multiple channels he has developed a following in, including YouTube vlogs, podcasts, and social media. His YouTube channel is the most-watched in the sport, with over 112,000 subscribers.

When the prospect of the International Swimming League came to light, the 27-year-old was one of its biggest supporters, and he firmly believes it is necessary to make the sport pertinent every single year.

“In my opinion as an athlete, swimming needs to evolve,” he said in an interview. “I believe evolving is the only way our sport will become relevant outside of the Olympic Games.”

“Swimming needs to be packaged differently, it needs to be engaging and have real stakes, which is completely possible. The ISL is our first step at providing necessary changes to grow and popularize our sport on a global, professional level. I’m beyond excited to be apart of making history.”

One thing the ISL has implemented is putting more of the focus on team points and less on the times swum by the athletes, something Miller thinks is critical to engage the viewer.

“I think that taking the emphasis off of time and focusing on place will allow audiences to follow the progression of each session,” he said. “Turning a two-hour swim meet into a ‘match’ is exactly what fans need.”

Formerly a member of the Indiana Hoosiers in the NCAA, Miller still trains with the college team in Bloomington, and had the opportunity to compete in the inaugural ISL match close to home in Indianapolis. The feedback he got was positive, and drew comparisons to major professional sport leagues, to which the league aspires.

“I was surprised how much my non-swimming friends enjoyed the televised event,” he said. “Lots of people told me it felt like watching an NBA game, which is exactly what we want.”

With the fan base he has created for himself, Miller plans on using his platform to help grow the new professional league and hopefully inspire the next generation.

“I plan to highlight the ins and outs of the ISL from a ‘behind the scenes’ perspective,” he said. “I want to show young swimmers what it’s like to be on a pro swimming team. What it’s like to walk out behind the blocks for an ISL race in front of the lights and cameras.”

“My hope is that showing people the fun we have while navigating this giant television packaged spectacle, it’ll excite our swimming youth. And hopefully inspire some kids to want to grow up and be a professional swimmer.”

And that exuberance that shines through online is what the Las Vegas native will bring to his club, the DC Trident, as one of the team captains.

“My only objective, being the male team captain, is to keep the positive energy up, and make sure everyone’s just having a good time. If I can make people laugh and feel comfortable, I’m doing my job.”

As for who he sees as a potential rival, both personally and for the club, Miller thinks that it will take time. But once the league develops, they will be there, and will make things more exciting.

“I think with this being the first year, everyone is just getting the lay of the land, kind of feeling out how this competition is going to go,” he said. “No one really knows, we’re swimming in uncharted territory right now.”

“But I do think that in time, as the league develops, we will certainly see rivalry’s develop. Which is a good thing, rivalries make sports way more fun and interesting.”

Ultimately, if the league is successful in making swimming a viable full-time professional sport, it will give athletes the opportunity to swim much longer than they would have previously. This is very much relevant to Miller, who will be 28 after next summer’s Olympics wrap up in Tokyo.

“Yes 100 percent,” he said when asked if the ISL will give him the chance to extend his career. “If the league is successful, I can see myself swimming for many more years. My hope is that it will really solidify professional swimming. Provide real salaries and financial opportunities that swimmers haven’t had the luxury of.”

“I think if the league is successful, you’ll see fewer people retiring after the Olympics every four-year cycle. You see, every four years people retire because they don’t want to train another four years in the hopes of competing at one event.”

The Olympic Trials (and the Olympic Games) often define an athlete’s career. It is literally make or break. For Miller, changing this is the key to longevity.

“Right now swimming operates on a four-year plan. Hopefully the league can shift that into a yearly plan. And by doing so, my hope is that the league will keep more swimmers in the sport. Everyone wins.”