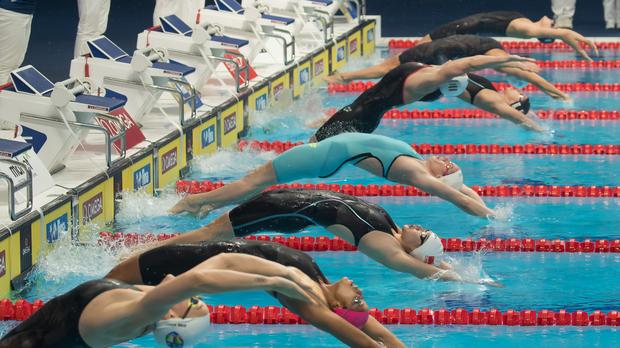 This week the international swimming body Fina came under severe criticism after it forced the Energy for Swim meeting in Turin, which was scheduled for December, to be cancelled. Photo: Attila Volgyi/Xinhua.

In a world where society is demanding more openness from public institutions, sporting bodies prefer to clam up instead.

When the shadiness of your operations has held you in good stead, it is understandable why moral reprehensible people would allow a silly thing like transparency to spoil the party.

Sporting bodies like Fifa and the International Olympic Committee (IOC) are often likened to a mafia cabal, but often their dirty laundry ends up in the open.

But it is more often than not thanks to whistle-blowers and investigative journalism instead of organisations willingly participating in transparency.

This week the international swimming body Fina came under severe criticism after it forced the Energy for Swim meeting in Turin, which was scheduled for December, to be cancelled.

The meeting would have taken place after the World Short-Course Championships, with a host of international stars including South African Olympic gold medallists Cameron van der Burgh and Chad le Clos.

Fina has threatened to suspend swimmers, as the event was not sanctioned by the international governing body.

They would not recognise the meeting, citing Fina general rules which prohibit “any kind of relationship with a non-affiliated or suspended body”.

The Italian Swimming Federation, an affiliate of Fina, was set to organise the meeting, and argued that Fina was threatened by a revenue-sharing model which would have seen athletes, coaches and clubs receive 50 percent of the funds.

World 100m breaststroke record-holder Adam Peaty of Britain have been a strong proponent of the meeting and critic of Fina’s strong-arm tactics.

“I’m incredibly disappointed,” Peaty stated. “As swimmers who represent our country and are passionate about our sport, we need to ask why.

“I firmly believe that the athletes should be at the heart of any decision made by our governing body and this is just what our sport and the athletes need. I think this is the wrong decision and it will galvanise the swimmers, not break them.”

The meeting formed part of a larger plan by the International Swimming League (ISL) to host a series of international meetings in future.

The establishment of the ISL raised hopes of new life being breathed into the sport thanks to the format and the incentives the athletes would receive.

The invitational meet would have consisted of swimmers divided into four different teams.

But athletes that participated in the event could have faced a Fina ban up to two years. This would have had dire consequences for next year’s World Long-Course Championships as it would have meant the absence of the superstars.

Swimmers have grown despondent over Fina’s perceived lack of transparency and engagement of the needs of athletes.

The organisation is doing incredible harm to the sport through bullying tactics and taking a perceived anti-athlete approach.

Fina and other local and international bodies need to understand their decisions should ultimately be to the benefit of athletes and the sport.