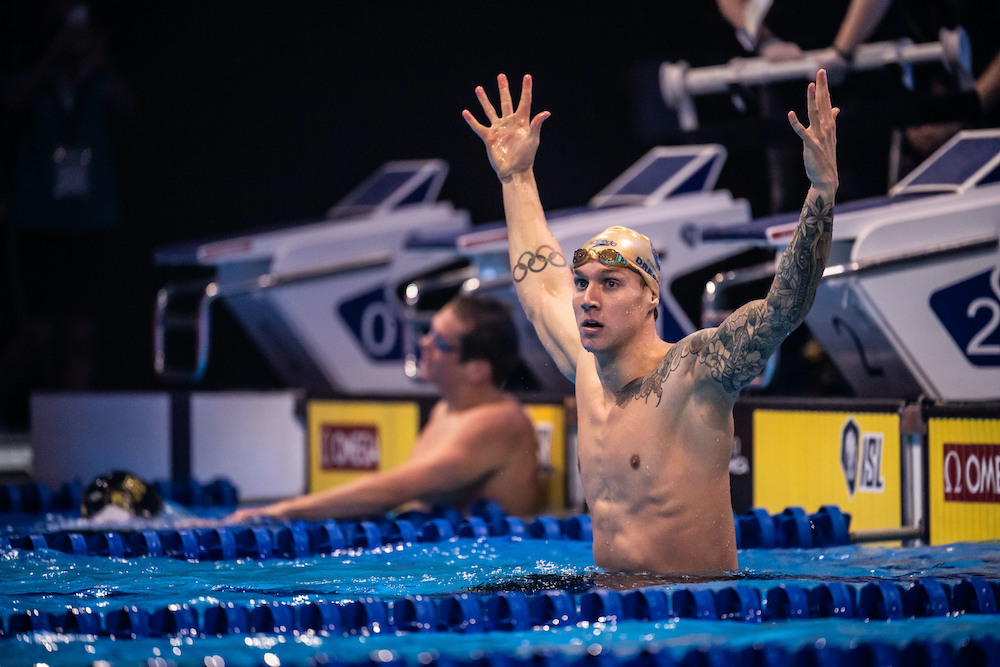 Cali Condors took firm control on Day 1 of the International Swimming League (ISL) Grand Final thanks to two world records from Caeleb Dressel and another by the women’s 4x100m individual medley relay team at the Duna Arena in Budapest.

It means that Cali lead the overnight standings with 267.0 points, defending champions Energy Standard are second with 239.5, London Roar sit third on 199.5, while LA Current are fourth with 177.0 points.

Dressel broke the 100m butterfly world record in his first race of the day and later improved on his 50m freestyle world record to add to the 100m individual medley world record he set in the semifinals.

In the 100m butterfly Dressel was up against the now former record holder Chad le Clos, who had been victorious four times in Season 2020 to Dressel’s three victories.

However, it was LA Current’s Tom Shields who started strongest, but by the final turn Dressel was in control at the front and he powered away to touch home first in 47.78 and lower le Clos’ world record of 48.08 that the South African set in Canada back in 2016.

Forty minutes later Dressel returned to the pool for the 50m freestyle and while he did not make the best start, he showed his class to finish ahead of Energy Standard’s Florent Manaudou, breaking his own world record in the process stopping the clock in 20.16, improving his previous best of 20.24 that he set at the ISL Season 2019 Grand Final in Las Vegas in December last year.

The USA’s Oliva Smoliga, Lilly King, Kelsi Dahlia and Erika Brown followed Dressel’s example when they set a new world record in the women’s 4x100m medley relay of 3:44.52. It bettered the previous record of 3:45.20 that a US quartet set in Omaha, Nebraska in 2015. It also gave Cali head coach Jonty Skinner choice of the stroke for the women’s 50m skins elimination race.

“We were third going into today, we needed a big day, and we go it, “Skinner said. “I’m just glad we have the choice (for the women’s skins). That was the bottom line.”

After Dressel’s world record performance Beata Nelson kept up the Condors early momentum when she won the women’s 200m backstroke with a personal best of 2:00.27. She led from the front to hold off Energy Standard’s Emily Seebohm and teammate Hali Flickinger.

“It’s what we’ve been waiting for,” Nelson said. “We were super-excited for this match and were really ready to go. We saw Caeleb’s world record before and that gave some extra energy for the win.”

King continued her dominance of the women’s 200m breaststroke when she set a new US record of 2:15.56.

She had won four races before the final but was pushed hard by London Roar’s Annie Lazor over the final 25m. However, she held her form to secure a jackpot win for the early pace setters.

King added her second win of the day when she held off the fast finishing Benedetta Pilato, who finished with a new Italian and World Junior Record of 28.81, to win the 50m breaststroke with 28.77.

She finished ahead of Energy Standard’s Mary-Sophie Harvey in 25.83 and rack up her fifth victory over the distance during Season 2020.

Hali Flickinger gave Cali Condors a big boost when she reeled in Energy Standard’s Siobhan Haughey in the closing stages of the women’s 400m freestyle when winning in a time of 3:58.77.

It was her fourth victory over the distance in Season 2020 and her victory had extra significance when teammate Haley Anderson finished third.

“I like to control my own race. I try not to go out superfast because I know I have a good back end,” Flickinger said. “The way I train is showing in the pool and I’m getting the points.”

Evgeny Rylov set a new Russian record of 1:46.37 to win the men’s 200m backstroke. He needed to be at his best to defeat LA Current’s Ryan Murphy who had won all five of his races over the distance in the preliminary matches and semifinals.

Rylov caught the strong-starting Murphy by the halfway stage and then held his form to the wall to secure his fourth win over the distance in Season 2020.

Sjostrom was soon back in the pool for the 50m freestyle which she won in 23.55, her fifth victory of the season over the distance, before Ilya Shymanovich beat London captain Adam Peaty in the 50m breaststroke with 25.48.

The men’s 4x100m freestyle team of Rylov, Kolesnikov, le Clos and Manaudou added another relay victory. The quartet dominated and finished in 3:02.78 with Cali second and LA third.

Kirill Prigoda secured London’s first victory with a strong showing in the men’s 200m breaststroke. The Russian won in 2:01.71 after leading from the front, with Cali Condors’ Nic Fink following him home in second.

Sydney Pickrem added London’s second victory when she won the 200m individual medley. The Canadian finished in 2:04.00 to hold off Cali’s Meghan Small.

Tom Dean won the men’s 400m freestyle, just as he did in the semifinals. The British swimmer took the lead by the halfway stage and while Energy Standard’s Danas Rapsys closed in quickly over the final 25m, Dean held to touch home by a few strokes in 3:36.56.

“Each team is able to go close to the tile,” women’s 400m freestyle swimmer Aimee Wilmott said. “The atmosphere has picked up and everyone wants to put in their best performance of the season.”

Beryl Gastaldello ensured that the Grand Final opened in dramatic fashion when she fought back over the final 25m to win the women’s 100m butterfly in 55.34.

The French swimmer was in the lead at the first turn, but by the final turn Cali Condors’ Dahlia was in front. Gastadello clawed her way back to secure her third win over the distance in Season 2020.

Andrew Seliskar gave LA their second win of the match when he fought off London’s Andreas Vazaios and Duncan Scott to finish the men’s 200m individual medley in 1:51.53.

Ryan Murphy showed his class in the men’s 50m backstroke, winning with a new US record in a time of 22.54.

He was the fastest starter and sped away from the chasing pack that was led by Cali’s Coleman Stewart who held on for second place.

“Everyone is focused on doing their individual job,” Seliskar said. “I watched Beryl and the others and to see everyone come together with their best results of the season meant I wanted to do my job.”

“I’m happy with my race and we need to keep the dynamic going tomorrow.”

DIGITAL PLATFORM: Matches are being live streamed in countries with no broadcaster agreement on the ISL digital platform ISLand, which can be accessed here.