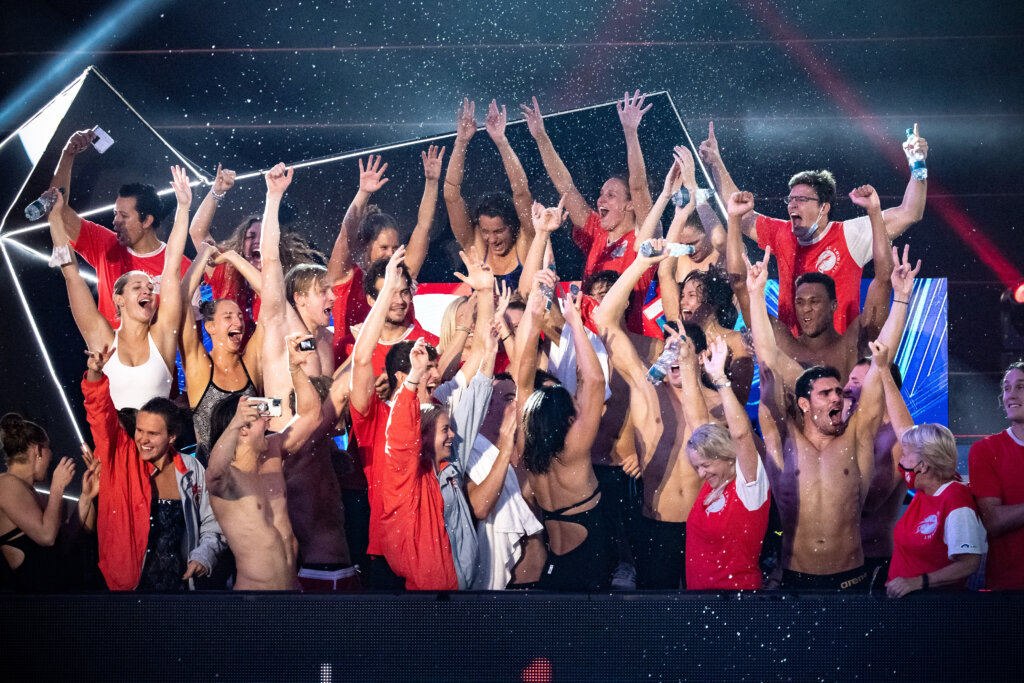 Grigorishin: “Naples has been great, and everyone enjoyed the show”

Aqua Centurions, Cali Condors, Energy Standard, LA Current, London Roar, Toronto Titans, DC Trident, and Iron are the 8 teams that have qualified for the Play-offs of the ISL Season 3 that will take place in Eindhoven (Netherlands) from November 11 to November 28, 2021.

Match 11 of the Regular phase of the ISL Season 3 2021 finished with a bang.  Nicknamed “the death match” it was also a lifeline for the two out of four teams – so much was at stake.  And it was a great spectacle indeed that everyone had expected.

The result of the battle puts DC Trident, with it’s 506 points, into an elite list of match winners with more than 500-point count.  Iron, who fought to the end, came in second with 497 points, separated by clear blue water from the NY Breakers and Tokyo Frog Kings, who finished third and fourth with 388.5 and 385.5 points, respectively.  So it is DC Trident (Washington DC) and Iron (Budapest) that will be flying to Eindhoven, in early November, where they will join six other ISL teams to compete in 6 Play-offs.

“Honestly, I did not expect to be so tired after five weeks in Naples, but this final match has been my fastest one.  This was my first time in Naples, and I really had an amazing time.  Having good weather, being able to go outside after COVID, eat great food and swim with friends from all over the world has been absolutely crazy.  I really love the ISL and can’t wait to do other races in front of my people” – said Ranomi Kromowidjojo (team Iron) – “I am so happy my team qualified for Eindhoven.  This gives me such a rare opportunity to show my hometown to all my teammates and teams that will compete there in November”.

So, the eight teams who qualified for the Play-offs will meet again in Eindhoven where, according to the draw attached, the competitions will start on November 11.  Energy Standard, DC Trident, Cali Condors and Iron will compete in the first match of the Play-offs on November 11-12, followed by Aqua Centurions, London Roar, LA Current and Toronto Titans who will clash on November 13-14.

“Naples has been great, and everyone enjoyed the show.  It will be a hard act to follow, but I am certain that we can match and even surpass it in Eindhoven.  The atmosphere in Eindhoven will be fantastic.” have been the words of Konstantin Grigorishin, Founder and President of the International Swimming League (ISL), at the end of the Italian matches.

We had a great time here, in Naples.  We enjoyed the city, the people, the food, the weather, the competitions, and it was beautiful to see a lot of kids cheering the athletes during the event.

It has been a very positive experience for all of us, and we have been very happy with the whole organization.  In fact, we are already in discussions with the local authorities and with the city of Naples about the future.  Hopefully, we can bring the ISL back to Naples next year.”