Home | ISL | News | MATCH #10 Centurions proceed to the play-offs, the rest are waiting for the "Death/Revival Match"

MATCH #10 Centurions proceed to the play-offs, the rest are waiting for the “Death/Revival Match” 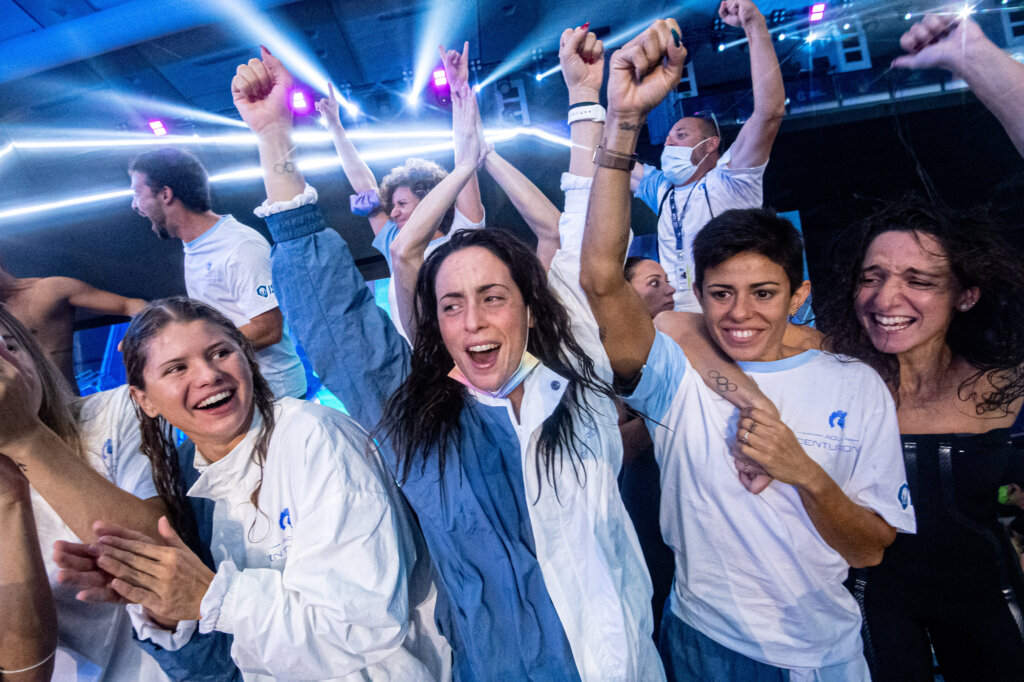 On September 25th and 26th, the last match of the Third Regular Season of ISL was held in Naples, Italy. The Italian club Aqua Centurions, the Hungarian Iron, the Japanese Tokyo Frog Kings and the American NY Breakers took part in the match. Out of these four teams, only one could qualify for the play-offs directly by finishing 6th in the Regular Season, the rest would go to the “death match”. This is where the 4 Regular Season underdogs (3 from match 10 as well as DC Trident who already had their last match) play out the last two spots in the play-offs, held in November, in Eindhoven, the Netherlands.

Based on the standings, the chances of the Centurions looked better from the very beginning: in certain scenarios, they were content with a 2nd place finish. However, even the Breakers had a theoretical chance, but in addition to a 1st place, they needed the Centurions to take the last spot in the match.

Iron’s Ingeborg LOYNING won the women’s 200m backstroke (with a minimum jackpot) and her teammate Erik PERSSON beat Daiya SETO (TOK) by 0.07 seconds in the men’s 200m breaststroke, taking a jackpot of 12 points.

The Frogs had some modest wins: Grigory TARASEVICH took the men’s 200m backstroke (with a minimum jackpot), Catie DELOOF won over Maria KAMENEVA (AQC) by 0.01 seconds in the women’s 50m freestyle (no jackpot) and Daiya SETO took the win in the men’s 200m individual medley (also without a jackpot).

The Breakers won the women’s 200m breaststroke with Molly RENSHAW taking the 1st place (without a jackpot) and Abbie WOOD adding 6 points for the 3rd place. WOOD herself shared the 1st and 2nd place with the Olympic champion Yui OHASHI (TOK) in the 200m IM; both received 9.5 points, while Iron won the event with 11 points for the 3rd and 4th places.

At this point, the scores were tight between the top three teams, which suggested a fierce battle for the lead:

However, here the Centurions had an impressive series of victories.

First, Nicolo MARTINENGHI won the men’s 50m breaststroke with a jackpot of 15 points and his teammate Fabio SCOZZOLI added 6 more points for the 3rd place. Even more impressive was the victory of the Italian team on the same distance for women: Arianna COSTIGLIONI finished 1st with a jackpot of 19 points, Martina CARRARO took the 2nd place and added 7 more points to the Centurions.

The series of Aqua’s wins was completed by Elena di LIDDO and Holly BARRAT who took the 1st and 3rd places in the women’s 50m backstroke (without a jackpot).

The position of the clubs changed drastically:

Iron tried to get closer to the Centurions: Guilherme BASSETO and Robert GLINTA took the first two places in the men’s 50m backstroke (without a jackpot).

Even more convincing was the victory of the Hungarian club in the women’s 400m freestyle – Barbora SEEMANOVA took the 1st place and got 19 points (minimum jackpot of 10 + 9 points for the 1st place at the 100m mark), while her teammate Veronika ANDRUSENKO got another 6 points.

In the men’s 400m freestyle, Brendon SMITH finished 1st, getting 11 points. However, the Centurions got the team victory: Matteo CIAMPI took 13 points for the 2nd place and Ilia BORODIN took 9 for the 3rd. Interestingly, Iron’s Leonardo SANTOS, who was the leader at the first 100m, not only got jackpotted at the finish line, but was also penalized for not making the cut-off time.

At the end of the first day, two Centurions’ relay teams – women’s and men’s – took both 4x100m medley relay events.

For women, the first relay team (Maria KAMENEVA, Arianna COSTIGLIONI, Elena di LIDDO and the legendary Federica PELLEGRINI) won with a minimum jackpot of 20 points. Aqua’s second relay team added 8 points for the 5th place. Ream Iron took a total of 24 points for the 2nd and the 4th place in the relay. In the men’s relay, the Centurions’ men won convincingly: their two relay teams finished 1st and 2nd, getting their team a total of 38 points.

The position of the clubs after the first day was as follows:

Obviously, both New York and Tokyo lost their chances of winning, however, their leaders kept fighting hard despite the unavoidable “death match” awaiting them on October 29th and 30th. The Ironmen also fought to the last and their efforts might have even been rewarded, if the fortune had been a little more favorable towards them.

Iron kept running behind the Centurions as their swimmers Ranomi KROMOWIDJOJO and Barbora SEEMANOVA took the 1st and 2nd places in the women’s 100m freestyle (no jackpot). Aqua immediately responded with a “double” win on the same distance for men by Alessandro MIRESSI and Thomas CECCON (also no jackpot).

Alys THOMAS and Maria UGOLKOVA brought 13 points to the Ironmen for the 2nd and 3rd places in the women’s 200m butterfly, while the Centurions only took 3 points.

In the men’s 100m backstroke, Robert GLINTA from Iron took the 1st place with a jackpot of 15 points, while Lorenzo MORA added 6 more points for the 3rd place (between them was the Centurion Matteo RIVOLTA).

Another “double” was taken by Arianna CASTIGLIONI (with a minimum jackpot) and Martina CARRARO from Aqua in the women’s 100m breaststroke. Another member of the Centurions – Arno KAMMINGA – won on the same distance for men with a jackpot of 12 points. Nicolo MARTINENGHI added 6 more points to the team for the 3rd place.

In the women’s 50m butterfly, Holly BARRAT brought the Centurions a win (with a minimum jackpot) and Elena di LIDDO added another 5 points for the 4th place. In the same race, Ranomi KROMOWIDJOJO and Melanie HENIQUE brought team Iron 13 points for the 2nd and 3rd places, respectively.

Nicholas SANTOS from team Iron took the biggest jackpot of the match – 24 points – in the men’s 50m butterfly. The remaining 13 points went to the Centurions’ Szebasztian SZABO and Matteo RIVOLTA who took the 2nd and 3rd places, respectively.

In the mixed 4x100m medley relay, the two Centurions’ relay teams took the 1st and the 3rd place with a total of 32 points, while for the 2nd and the 4th place, the Ironmen got 8 points less.

The 50-point gaps as well as the stroke of the skins chosen by the Centurions made the question concerning the winner a foregone conclusion.

In the women’s skin races, the butterfly gave AQC and IRO roughly equal chances to win. Holly BARRAT beat Ranomi KROMOWIDJOJO in the quarterfinals, with none of the Frogs or the Breakers making it to the semi-finals. In both the semis and the final of the women’s skins, KROMOWIDJOJO defeated BARRAT.

Team Iron got 42 point, however, it was not enough to narrow down the gap with the Centurions, who scored 33 points in the same event.

In the men’s skin races, Iron’s skins king Thom de BOER beat Alessandro MIRESSI twice, in the semifinal and the final. Frog’s Vladimir MOROZOV and another Centurion Szebasztian SZABO made it as far as the semifinal. Iron took 35.5 points against 31.5 that went to the Centurions, which could have only brought the Hungarian team moral satisfaction.