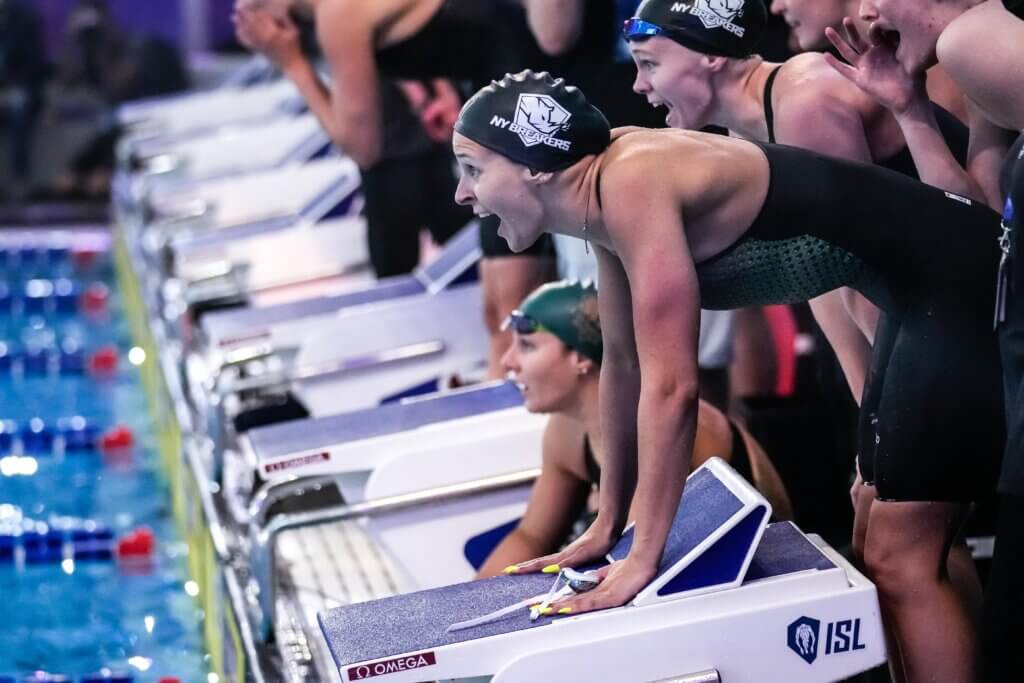 The third match of the Third Regular Season of the ISL took place between the 2nd and 3rd of September at the Piscina Scandone in Naples. This time British “London Roar” (LON) and Hungarian “Iron” (IRO) entered the competition. Their opponents were the French team “Energy Standard” (ENS), which won the first match of the regular season, and the American NY Breakers, who finished last in match #2.

As the final protocol shows, LON and IRO look like solid middles so far:

The only real intrigue of the match was the battle for the 2nd and the 3rd places, which lasted up until the skins races.

As for the “Breakers”, Abbie WOOD reasserted her “top of the game” status by winning both 200m and 400m individual medley (getting a jackpot of 19 and then 21 points with the 1st place in the 100m mark respectively).

There was also no doubt in Brendon SMITH’s victory in the men’s 400m freestyle and 400m IM. However, in the latter, due to his 5th place in the 100m he scored less points than Luke GREENBANK who took the final 3rd place – 13 points against 15.

Meanwhile, the win of the “Breakers” in the men’s 4x100m freestyle relay was a bit of a surprise, although it didn’t really affect the course of the match.

The real fight for the first place ended after the 6th swim, when LON was 2 points ahead of ENS. Energy with three “individual wins” by Anastasiya SHKURDAI (women’s 100m butterfly; no jackpot), Chad le CLOS (the same distance for men; no jackpot) and Evgenia CHIKUNOVA (women’s 200m breaststroke; 12 points jackpot) were challenged by Roar’s two “doubles”: Minna ATHERTON (with a minimum jackpot) and Kira TOUSSAINT took first and second places in the women’s 200m backstroke, while Luke GREENBANK (with a jackpot of 12 points) and Christian DIENER repeated the success in the same distance for men.

In the 7th swim, Energy Standard achieved a superb victory in the women’s 4x100m freestyle relay. It was followed by Sarah SJOSTROM’s win in the 50m freestyle with a jackpot of 24 points and Siobhan HAUGHEY’s additional 7 points for the 2nd place in the 9th swim. Their only competitor who brought points to her team was Iron’s Ranomi KROMOWIDJOJO.

At this point, the gap between “Energy” and “London” reached 55 points.

In the men’s 50m breaststroke, Ilya SHYMANOVICH took the 12th swim and brought 24 jackpot points to ENS, while the third place winner Felipe LIMA brought 6 more points to the team. Emre SAKCI of IRO cut in between them.

LON also had some momentum: Alia ATKINSON finished first in the 50m breaststroke with a jackpot of 15 points. Guilherme GUIDO finished first the 50m backstroke with the same amount of points winning by only half a second. He beat Kliment KOLESNIKOV of ENS, the winner of silver (100m backstroke) and bronze (100m freestyle) in the Tokyo Olympics.

The final doubts about the victory of Energy Standard were dispelled after the convincing victories in both men’s and women’s 4x100m mixed relay, the results of which determine the style of the skins.

After the first day the positions of the clubs were as follows:

On the second day of match 3, “Energy” kept increasing their lead, with Siobhan HAUGHEY and Sarah SJOSTROM as the main stars. The duo took the 1st and the 2nd place in the women’s 100m freestyle. Furthermore, SJOSTROM beat Ranomi KROMOWIDJOJO of IRO by 0.04 seconds in the 50m butterfly; and in the 200m freestyle Siobhan HAUGHEY won with a jackpot of 30 points. Their brilliant performance in the skins will be mentioned later.

Ilya SHYMANOVICH repeated his success of the first day, this time in the men’s 50m breaststroke where he took the first place and a 24-point jackpot. His teammate Felipe LIMA brought 7 more points for the second place.

In the meantime, Ben PROUD, who won the men’s 50m freestyle on day 1, arrived second in the 50m butterfly on day 2, giving the victory to Nicolas SANTOS.

Double victory in the women’s 100m medley (although without the jackpot) was achieved by Mary-Sophie HARVEY and Anastasiya SHKURDAI.

Roar’s class continued with Alia ATKINSON’s performance, who won the women’s 100m breaststroke with a jackpot of 12 points. Her victory was followed by Duncan SCOTT who added a 1st place with 12 jackpot points in 200m freestyle to his 1st day victory in 200m IM.

Guilherme GUIDO beat Kliment KOLESNIKOV again, this time with a jackpot of 19 points in the 100m backstroke; while Teppei MORIMOTO beat Chad le CLOS in the men’s 200m freestyle.

Team Iron also had its champions: Alys THOMAS in women’s 200m butterfly; Nicolas SANTOS in men’s 50m butterfly and the 1-2 of Marco ORSI and Leonardo SANTOS in 100m individual medley.

Before the skins the positions of the teams were as follows:

The gap between LON and IRO left some chances for the Hungarian team. However, besides the objective factor, Iron’s representatives at skins races (freestyle for women and butterfly for men) looked more favourable than London’s. Team Iron had to be accompanied by good luck, but it just seemed to lack a little.

Lions’ representatives Kira TOUSSAINT and Kim BUSCH didn’t make it to the semifinals of the women’s skins event and got 5th and 6th places respectively. They lost to Arina SURKOVA of NYB by only 0.01 and 0.03 seconds.

Sarah SJOSTROM and Siobhan HAUGHEY shared the win finishing with the same result and were followed to the finish line by Ranomi KROMOWIDJOJO, who took the 3rd place. However, Ranomi didn’t make it to the final skins and the event was played between two Energy’s female swimmers. Sarah SJOSTROM took the win in the skins with a jackpot but still couldn’t top Siobhan HAUGHEY – she won the MVP of the match outrunning Sarah by 0.5 points.

However, the quarterfinals of the men’s skins race gave team Iron hope once again: both their representatives, Nicholas SANTOS and Marco ORSI, advanced to the semi-finals after getting the 1st and the 2nd place respectively. The final round of skins was played between Vini LANZA from LON and Nicholas SANTOS, so the intrigue ended. Nevertheless, Vini LANZA showed his character and beat the veteran Nicholas SANTOS.

From the results of the match, we can say that ENS seems to have a solid chance to get to the Finals of the Third Season. LON will go to play-off directly, but the Finals are not guaranteed. IRO will need to make serious efforts to avoid the “match of death” – an extra match for the teams who take the 7th-10th places to fight for two places in the play-off. For the NYB “match of death” not only is almost inevitable but also seems to be at a threat of failure.