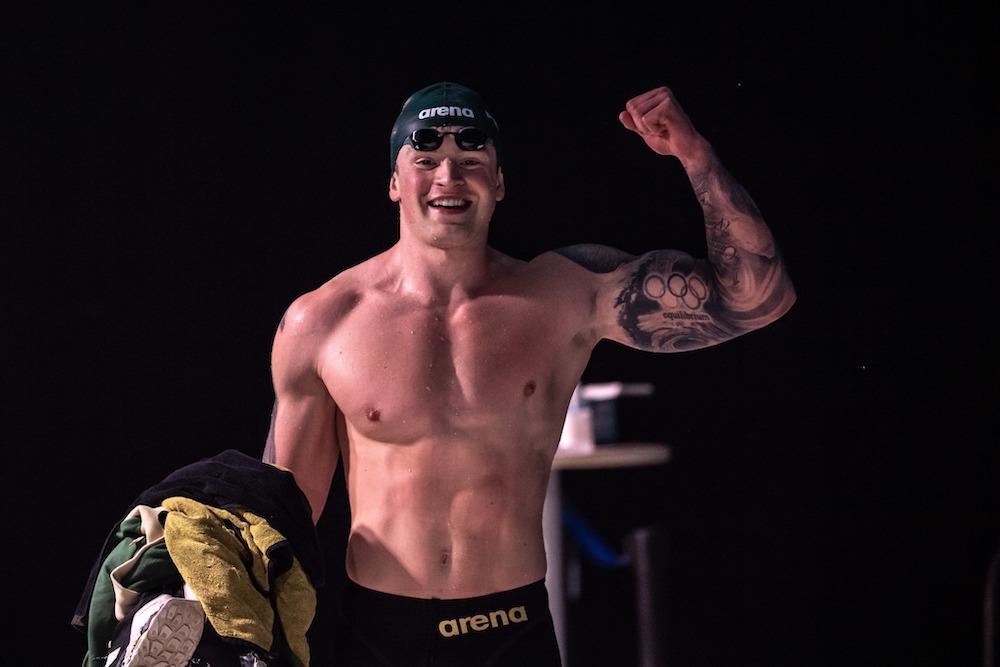 London Roar captain Adam Peaty led from the front to take his team into the International Swimming League (ISL) Season 2020 Grand Final alongside Energy Standard when he set a new 100m breaststroke world record on Day 2 of the first semifinal at the Duna Arena in Budapest.

Peaty trailed Energy Standard’s Ilya Shymanovich at the final turn, but he kicked hard over the last 25m to finish in 55.49. It is his first short-course world record and ends an 11-year wait to break the previous best of 55.61 that was held by South Africa’s Cameron van der Burgh.

“It took so much out of me with those turns, but there there’s no-one who works harder on that last leg,” Peaty said. “It is what we have been working on for 10 years, moments like that.

“It is all a learning process and that wasn’t my best swim. I know it is a world record, but I know I can swim faster.

“When you have a great team here and back home analyzing the data, it makes it all worthwhile. It is my victory but it’s as much theirs as well.”

Peaty’s win allowed London to finish second with 517.5 points, not far off the pace set by reigning champions Energy Standard, who scored 580. The two teams will meet again in the Grand Final on November 21 and 22.

ISL debutants the Tokyo Frog Kings finished third with 380.5 points, while the NY Breakers came in fourth on 239, marking an end to both teams’ time in Budapest.

After Day 1 when Energy Standard won nine races, Siobhan Haughey opened Day 2 with another victory and her second 100m freestyle win of Season 2020. She led from the front to win in 51.12, ahead of London’s Freya Anderson.

Her time was a new Asian record, the second continental record the Hong Kong swimmer has set in Season 2020 following the continental best she recorded in the 200m freestyle in Match 9.

Florent Manaudou matched Haughey’s performance in the men’s 100m freestyle to give Energy Standard the perfect start. The Frenchman showed his class to lead at each turn and win in 45.92.

Chad le Clos added the 200m butterfly to his 100m butterfly win on Day 1. The South African had the lead by the first turn and he did not let it go despite pressure from Tokyo’s Tomoru Honda to finish in 1:50.64.

“I’m very happy with that,” le Clos said. “It was quite hard. I was quite tired at the end. I know London had to make a statement, so it was good to see [coach James Gibson] and the guys cheering at the end.”

Kliment Kolesnikov pipped London’s Guilherme Guido to victory in the men’s 100m backstroke with 49.38. He trailed the Brazilian from the start but produced a strong final 25m to overtake him and touch home first.

Haughey returned to the pool to win the 200m freestyle in 1:51.36, and lead home a one-two finish with Femke Heemskerk.

In the women’s 50m skins, Sarah Sjostrom and Madeline Banic pushed each other hard in the butterfly over the three races. In the final 25m of the third and final race, Banic was in the lead off the turn, but Sjostrom found her rhythm to win in 25.91, her third skins victory of Season 2020.

“It’s building. The guys were much better than they were in the last couple of matches,” Energy Standard head coach Gibson said. “London really stepped up their game, but we’ve raced them three times and beaten them every time.

London ended Day 1 with six victories and Melanie Marshall’s team claimed its first win of Day 2 when Kira Toussaint followed up her world record in the 50m backstroke on Saturday by outlasting Energy Standard’s Emily Seebohm in the 100m backstroke.

The Dutch swimmer grabbed the lead from the start and despite Seebohm closing in over the final 25m, she was strong enough to finish first in 55.90.

Duncan Scott set a new British and ISL record to win the 200m freestyle. He finished in 1:40.

76 after keeping the fast-finishing Danas Rapsys and Katsuhiro Matsumoto at bay over the final 25m.

Alia Atkinson won her third 100m breaststroke race of Season 2020. The Jamaican stretched her lead over the three turns and finished in a new ISL record of 1:02.66. Energy Standard’s Benedetta Pilato finished second in a reversal of the first two places from the 50m breaststroke on Day 1.

Scott showed he is in good form when he teamed up with Mikhail Vekovishchev, Anna Hopkin and Freya Anderson to win the 4x100m mixed freestyle relay with 3:15.17.

Peaty returned to the pool for the 50m skins 45 minutes after his 100m breaststroke world record. He set a new British record of 25.48 for the 50m butterfly, then defeated Energy Standard’s Shymanovich in the third race with a time of 25.70.

Tokyo captain Ryosuke Irie, Yui Ohashi and Leah Smith impressed on Day 1 with victories, and Suzuka Hasegawa added Tokyo’s first of Day 2 when she stretched her run of wins in the women’s 200m butterfly to five in Season 2020.

She powered away from the start and held her form throughout to win in 2:03.95.

Runa Imai dominated from the front to win her third 100m individual medley. She opened up an early lead and finished in 57.77 ahead of Sjostrom.

Takeshi Kawamoto pushed le Clos into second to win the 50m butterfly in 22.50, before Ohashi completed a sweep of five wins from five in the women’s 100m individual medley with a finish of 4:23.25.

Kosuke Hagino matched Ohashi’s sweep in the men’s 100m individual medley. He had opened a big lead by the freestyle leg, and while Energy Standard’s Max Litchfield began to close in, it was not enough to stop Hagino winning in 4:02.40 to give Tokyo another reason to celebrate after an impressive debut ISL season.

Emily Escobedo enjoyed NY Breakers only win of Day 1. She touched the wall first in the women’s 200m breaststroke in 2:16.71 for her first victory of Season 2020.

On Day 2, Michael Andrew became the second Breakers swimmer to earn their first ISL scalp. The 21-year-old held off the fast-finishing Vladimir Morozov of the Frog Kings in the men’s 100m individual medley to finish in 51.66.

Arina Surkova added a second when she held off Standard’s Banic on the second 25m to win the women’s 50m butterfly in 24.87. The pair was close at the turn and while Banic kicked hard it was Surkova who held her nerve to hold on and win.

“I think everyone was a little bit rusty at the beginning, but we’ve excelled over the meets and everyone has continued to set personal best times and swim faster,” Escobedo said. “Next season we’ll have some core swimmers, and we’ll get a lot faster.”