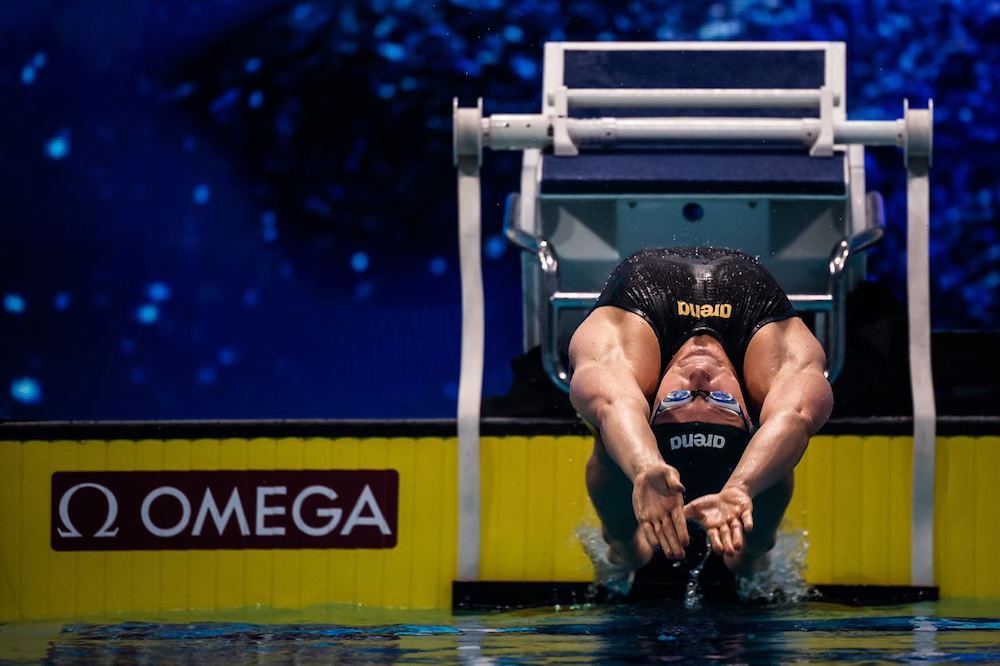 Kira Toussaint did all she could to ensure that London Roar stayed in contention with defending champions Energy Standard on Day 1 of the first semifinal of the International Swimming League (ISL) Season 2020.

The Dutch swimmer set a world record of 25.60 in the women’s 50m backstroke, the first world best off the ISL season taking place at the Duna Arena in Budapest.

Toussaint powered away from the start, coming out of the turn on her side before turning on the afterburners to beat the old mark of 25.67 set by Brazil’s Etiene Medeiros in 2014. After her triumph, the 26-year-old credited her mental focus and use of mantras for helping her accomplish the feat.

“I have a cue for every part of the race,” said Toussaint, adding that it was something she developed in 2016 while at the University of Tennessee. “For the start, I say ‘jump.’ Underwater, the word for me is ‘attack.’ And then for the breakout I tell myself to relax. For the last 5 meters I try to stay big.”

It was a big moment indeed for the backstroke specialist, who almost missed the opportunity entirely, scheduled as she was to return home to training camp on November 2. Fortunately for Toussaint and the London Roar, she opted to stay in the ISL bubble to see out the season, allowing the Dutch ace to produce the fastest time in history.https://isl.global/wp-content/uploads/2020/11/world-beater-toussaint-keeps-roar-in-hunt1.jpg

Toussaint’s outing kept the Roar within striking distance of Energy Standard, which continued its strong form from the preliminary matches to claim nine race wins and top the standings with 291 points.

London is on track to join Energy Standard in the Season 2020 Grand Final on November 21 and 22 by sitting second on 270. The Tokyo Frog Kings are third with 208, while the NY Breakers sit fourth on 114.

The match remains balanced after Energy Standard and London Roar each claimed a choice of stroke for the 50m elimination skins races. Energy Standard has the choice for the women’s race after its quartet won the 4x100m medley relay, while London chooses the men’s stroke.

Sarah Sjostrom gave Energy Standard a winning start when she came home first in the women’s 100m butterfly in 55.44, but London’s Marie Wattel stopped a one-two when she pipped Anastasiya Shkurdai to second place.

Chad le Clos matched Sjostrom’s win in the men’s 100m butterfly. The South African trailed at the halfway mark but powered through the final 50m to win with 49.14 with London’s Marius Kusch second.

Emily Seebohm made it three wins from the first three races, when she finished first in the 200m backstroke in 2:01.04.

“I always get so much motivation watching Sarah Sjostrom and Chad (le Clos),” Seebohm said. “I knew I had to step up. I definitely feel the energy rising as we move into the semis.”

Sjostrom returned to the pool alongside Siobhan Haughey, Pernille Blume and Femke Heemskerk to give Energy Standard its fourth win of the day with victory in the 4x100m freestyle relay in 3:25.82, a world’s best for a quartet of mixed nationalities.

Sjostrom and Florent Manaudou won the women’s and men’s 50m freestyle. Sjostrom finished in 23.43 and Manaudou in 20.63.

Evgeny Rylov, le Clos and Kliment Kolesnikov gave Manaudou a slight lead over London’s anchor swimmer Duncan Scott, but the Frenchman showed his class to swim away and bring the team home in 3:05.72.

Seebohm, Pilato, Madeline Banic and Sjostrom added another relay victory in the women’s 4x100m, their 3:45.58 setting another new world best for a team of mixed nationalities.

Duncan Scott ended London’s wait for a victory when he beat favorite Kosuke Hagino of the Frog Kings in the men’s 200m individual medley, needing a season-best 1:51.66 to do so.

Team captain Adam Peaty then showed his class to win the men’s 50m breaststroke. He trailed Energy Standard’s Ilya Shymanovich at the turn but powered through the second 25m to win with a new British record of 25.50.

“In the four previous matches I have been doing my training and getting my races done, now I’m bringing the emotion, bringing the fight, and bringing the drive,” Peaty said. “It’s all about the team effort and everyone is doing their job.”

Guilherme Guido matched Toussaint’s victory in the men’s 50m backstroke and led home a one-two finish ahead of Christian Diener with a time of 22.89.

Tom Dean ended Danas Rapsys’ run of four victories in the 400m freestyle when he held off the Lithuanian to win in 3:37.87.

Scott then shone for London in the 4x100m medley relay. He was given a slight lead over Manaudou at the final change and then fought hard to hold off the Frenchman and finish .05 seconds ahead.

Tokyo captain Ryosuke Irie gave the Frog Kings its first victory of the day and his first in the men’s 200m backstroke. He held off Energy Standard’s Kolesnikov and Rylov, who has won the race three times in Season 2020, to win in 1:49.02.

Yui Ohashi produced a strong finish to win the women’s 200m individual medley in 2:03.93. She was second over the first 100m, but grabbed the lead over the final stretch to hold off London Roar’s Sydney Pickrem and finish with the fastest time in the distance this season.

Leah Smith kept up her unbeaten run in the 400m freestyle in Season 2020. She finished in 3:58.26, ahead of Standard’s Haughey, who was chasing her third 400m freestyle victory.

“I knew that if I wanted a best time, I had to take it out with Siobhan and then have a good back end,” Smith said. “It didn’t go as well at the start, so I was counting on my back half to finish it.”

Emily Escobedo enjoyed the NY Breakers only win of the day. She reached the wall first in the women’s 200m breaststroke in 2:16.71.

It was her first victory of Season 2020 and she needed to hold her form at the end as London’s Annie Lazor closed in.

“It was our toughest session today and there are lots of areas to improve on,” the Breakers’ Michael Andrew said. “The times were there, but the rest of the competition has raised their level and all we can do is learn from today and try and up our game.”