INNOVATIONS IN ISL TV PRODUCTION RAMP UP THE ENTERTAINMENT 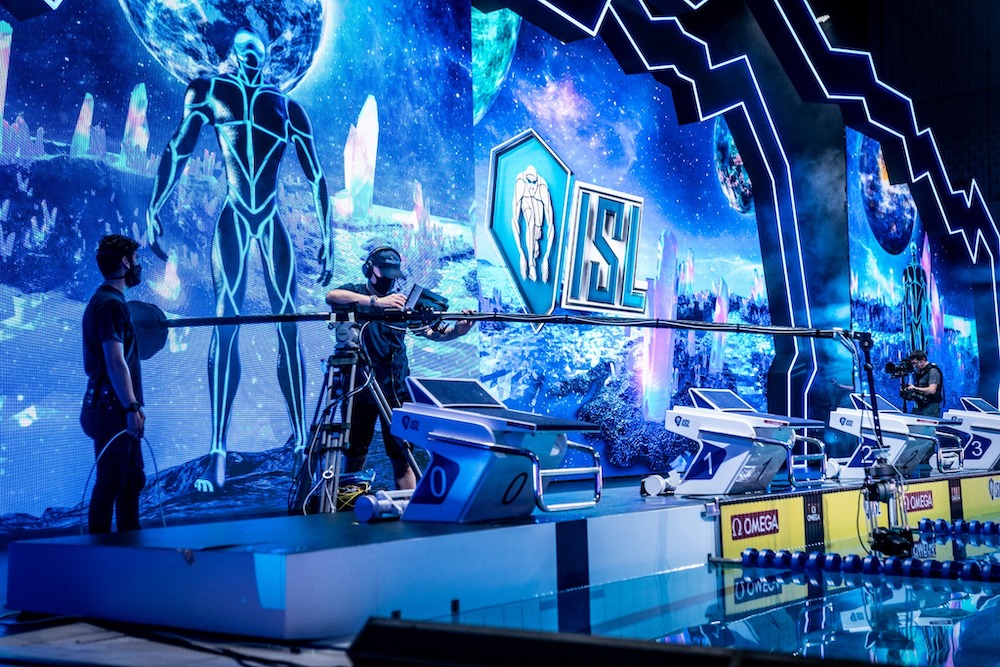 Fans watching the television coverage of the International Swimming League (ISL) have been wowed by a dazzling array of innovations in the presentation of the event.

Under efforts to grow the global appeal of the five-week competition, ISL organizers have invested significant resources in the TV and live production effort.

Across 13 matches and 52 hours of action, Season 2020 is being broadcast by rights holders in 140 countries and territories, with a live stream on the ISL website providing access for fans outside of those nations.

Robb Tasker, the ISL’s director of production, says the competition’s broadcast specs are on a par with the swimming world championships and the Olympics.

Around 70 people are involved in the operation; there are 25 cameras around the Duna Arena in Budapest for the live broadcast plus a raft of cameras to produce content for ISL-and, the OTT platform, and a crew of four ENG camera units roaming around capturing documentary-style content from the teams for use after the competition.

Tasker says ISL Founder and Chairman Konstantin Grigorishin gave the TV production team “free rein to make it as cool and as good as we can.

“He’s very receptive to that and very open to letting us explore that potential. That’s the benefit of having your own bespoke sporting league.

“When something is considered a new sport, there are no rules. You go in and you make your own rules. That’s what we’ve been doing and it’s a process … you learn as you go. Not everything works the way that you intended, and you make adjustments.”

Tasker says the aim was to build on the TV presentation of the ISL’s inaugural season, which relied heavily on the use of virtual and augmented graphics.

This year, they have added more cameras and brought in new ideas never seen before in the TV presentation of swimming.

The ISL has worked with its partners to deliver the upgrades. Girraphic Production is involved in the broadcast production and graphics. Movicom provides the aerial and rail cameras (RobyCam). Deep Vision offers expertise in the underwater cameras.

NEP is broadcast facilities provider, this year supplying more slow-motion cameras and other resources to support the ISL vision. Swiss Timing is on board with its world-leading electronic scoring and timing systems. PRG is the company behind the live staging and lighting work that has added some razzmatazz to the show.

Swimming fans tuning in from all corners of the world will have seen the augmented reality profiles and start lists. New for this season is a race tracking system, which can update viewers in real time and live track the race.

Tasker says it’s a “game-changer” in the way swimming is broadcast “because the nature of swimming is that these athletes are neck and neck and sometimes it is very hard for your general viewer to see who’s in front.

“We have eliminated that difficulty, now you can see live leader changes. I think this is a good and exciting addition which has never been used before in professional swimming competitions.”

The ISL also worked with Movicom to assess how their flying camera cable system could provide real-time tracking data.

Talks with Deep Vision also led to the development of what Tasker calls a “plunge camera” at the turn end of the pool. With the ability to track up and down, it gives perspectives from above and below the water line.

“They also attached high speed cameras to underwater cameras which can get you up to 500 frames in the replay sense. This is a fantastic addition and gives you insane looks at underwater strokes and the turns of these athletes.”

Tasker and the ISL will push the boundaries of what is possible in the TV production even further in the semifinals this weekend and the final on November 22.

“When you consider the advancements we have made so far in the form of virtual augmented graphics – innovations in the use of our camera systems both underwater and in the air – the next step is to tie them all together in unique ways,” says Tasker.

He says the ISL’s TV production partners “have been working diligently to enhance all these areas and present something new for the finals and semifinals.

“Something that sits comfortably alongside the presentation of other major sports events like the NFL or NBA. We want to open the show with a new and unique presentation style to highlight the culmination of this mad venture in an exciting way.”

Complementing the TV production is the hi-tech studio set-up for ISL-and, which includes cameras, desks and touchscreen technology to allow ISL analysts to break down the race action in a more detailed way.

Tasker also references the huge scale of the post-production workflow. ISL staff are producing content for the broadcast but also for documentaries and short-form storytelling formats that will be rolled out in the coming weeks. “Some of the stuff coming out of there is absolutely unbelievable,” he says.

The ISL will look to keep on innovating in its use of TV production technology in 2021 as it reinforces its message that the competition is much more than traditional sport but an entertainment show.

“We plan to continue growing on the footprint that we have to try and maintain the momentum,” he says.

Key for the ISL will be growing its engagement with the global fanbase, upping the ante to keep them informed and entertained.

“You can put as many cameras, as many lines and as many fancy bells and whistles on it as you want but if you don’t humanize it people don’t care,” he says.

“The competition speaks for itself. You have multiple world records broken, and probably more coming. What I think is important as we move forward is expanding on the humanity of it and giving better profile to these athletes and teams to create the tribalism and the support base that comes with that.”

The camera crews have improved the storytelling aspect thanks to the insights and stories gained from unfettered access to swimmers and coaches poolside – and away from it. He says this offers a deeper dive into the personalities of the swimmers and enhances the emotional attachment for viewers.

“Some of what we are getting out of them is phenomenal and I think when people see that it will give them a new appreciation for it and a new understanding of what these athletes go through and the work they are putting in and what it means to them. The more we can highlight that the better.”

“We are trying to get as broad a viewership as possible and the more we can do to enhance the coverage to make it appealing to those people the better off we are.”