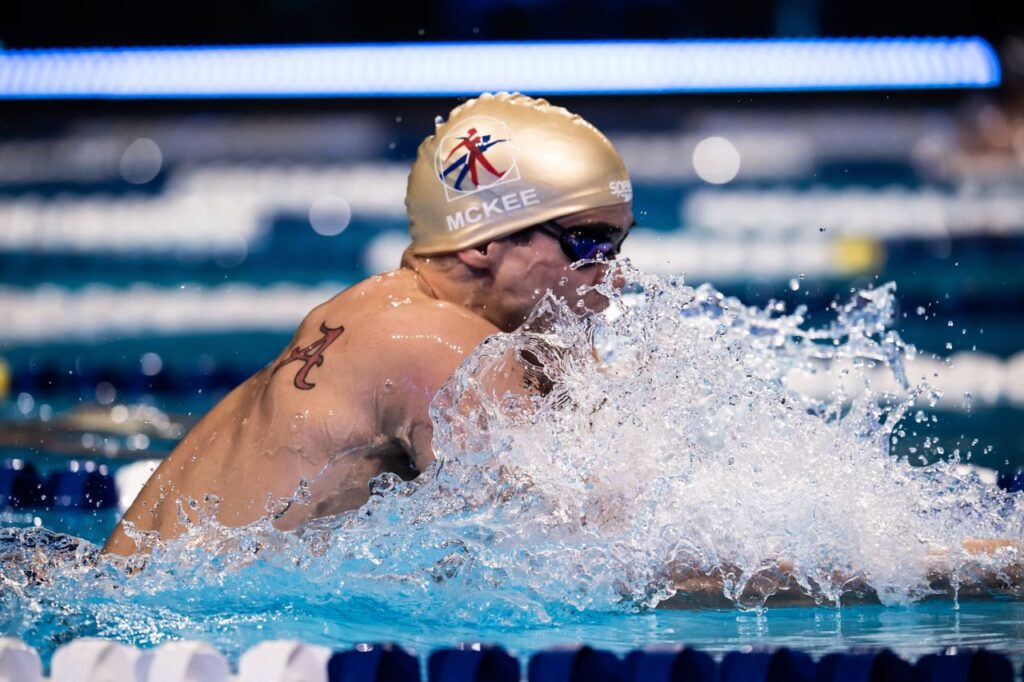 Energy Standard edged the Toronto Titans to take a narrow lead into Day 2 of Match 6 in the International Swimming League (ISL) Season 2020.

It was a game of cat and mouse between the teams through the 20 races held at the Duna Arena in Budapest. With the Standard and Titans dominating, the NY Breakers and Aqua Centurions were forced to take a backseat for the most part on an entertaining day in the pool.

The Paris-based Standard got off to a brilliant start, winning three of the first four races to set their stall out for the contest.

The lead didn’t last long though, with a rampant Standard securing 30 jackpot points in the women’s 4x100m freestyle and Florent Manaudou cruising to victory in the men’s 50m freestyle.

There was more to come from the Standard, who put their foot on the gas in the last batch of races. They picked up valuable points from back-to-back wins in the 50m breaststroke races.

But the Titans had a late surge in the quest to end the day in top spot, securing fine wins in both 50m backstroke races.

The Standard powered up again to do the double in the 400m freestyle races.

In two fiercely contested 4x100m medley relay races, it was the Titans who caused the biggest upset, beating the side managed by Jean-Francois Salessy. Crucially, head coach of the Canadian team Byron Macdonald now gets to choose the stroke for tomorrow’s skins race.

The final twist in the tail was the Standard’s win in the men’s 4x100m medley relay, giving them the edge with the pick of the skins race on Day 2.

Manaudou blasted his rivals to come first, bagging 26 valuable points to put the Standard – 10 wins to the good on a day packed with drama – 38 points ahead of the Titans.

Swedish superstar Sarah Sjostrom was on the sidelines for the Standard after hurting her back earlier in the week. Her absence was a major blow for the team, but she felt they performed well.

“I couldn’t even walk on Monday, but I feel better every day,” she told Eurosport’s poolside reporter Mark Foster.

“I just try and keep my mood up as team captain and cheer them on. Everyone is doing a very good job. Hopefully I will recover for the next match,” added Sjostrom, who won five races in the previous round.

After opening the meet with a 1-2 in the women’s 100m butterfly – with both Anastasiya Shkurdai and Madeline Banic going under 56 seconds – team bosses may reconsider whether to leave Sjostrom out of this race for future matches to save her energy.

Manaudou swam the fastest 50m freestyle of this ISL season (20.55), claiming a jackpot win: “It’s good I scored a lot of points for the team.”

In the women’s 50m breaststroke, 15-year-old Benedetta Pilato underscored her developing talent when she charged in to post her first ISL win.

Lisa Bratton and Kylie Masse hit the jackpot with first and second in the women’s 200m backstroke to lock up 31 team race points for Toronto. Shortly afterwards, Kelsey Wog dug deep to put in a big last 50m to win the 200m breaststroke, securing another 20 team race points.

Shane Ryan’s second win of the season in the 50m backstroke came hot on the heels of Masse’s brilliant win in the backstroke.

But the talk of the arena was the Titan’s shock win over the Standard in the women’s 4x100m medley relay. There was little to choose between them all the way to the final wall, but it will be head coach Macdonald who will pick the stroke of the skins race, and he’s hinted at backstroke. “That’s a big upset for us and also a really nice race to win,” he says.

The Breakers struggled to break the stranglehold on the match imposed by their well-organized rivals.

But Marco Koch again pulled out all the stops in the 200m breaststroke. Gunning for a world record, he notched the first win for his team on a day of mixed fortunes for the Breakers.

In a burst of speed over the last 100m, he missed the WR by 0.4 seconds but got a valuable haul of 19 team race points. Speaking poolside, Koch said he was “slowly improving. I’m still happy with the time. There are more chances.”

Another notable win came in the women’s 50m freestyle when Kasia Wasick swam the sixth fastest time in history and a lifetime best of 23:30 to claim big jackpot points.
And in the women’s 200m individual medley, 21-year-old Briton Abbie Wood obliterated the opposition to gain more vital points.

The Rome-based Aqua Centurions endured another frustrating day in the pool. Lacking the squad strength to threaten their rivals, the Centurions won only a few races but challenged hard for points in some others.

It wasn’t until race 10 before they landed their first win of the day through Philip Heintz in the 200m individual medley.
Szebaztian Szabo put in a couple of strong displays today, coming second to Chad le Clos in the 100m fly and helping the Centurions to a comfortable win in the 4x100m freestyle.
But the team know they must dramatically improve if they are to challenge for second or third spot tomorrow.